Chill Out! It's Just a Parking Spot 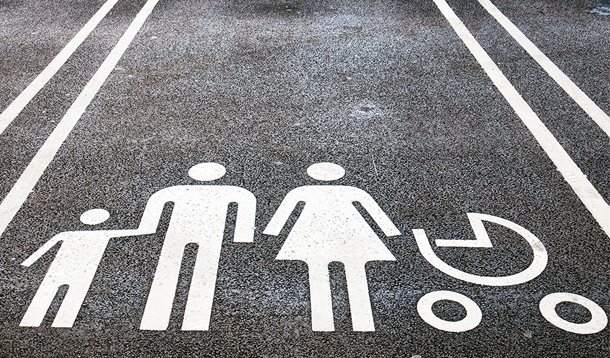 If you are bored, have all day to kill, and have nerves of steel, try suggesting to a Facebook moms group that it’s okay if people who are not pregnant or with small children park in one of the courtesy parents’ spots. I don’t suggest you try this in person; it could be dangerous.

I learned very quickly when I voiced this opinion that most moms disagree – vehemently. It was as though I had suggested it was fine to slap strangers in the face.

No, those spots are for parents. Got it? If you’re not a parent, GTFO. Oh, and you need to be an obvious parent. Pregnant but not showing yet? Expect a glare. Dad dropping Mom off in front of the store then parking close for when they are done? Nope. No penises unless they have been used to spawn children. No car seat in that parked car? They better see amniotic fluid dripping from whoever gets back into it.

I, mistakenly thinking myself to be a reasonable person, suggested that perhaps someone who is not pregnant or juggling a toddler might need closer access to the store occasionally. There is a very large spectrum between requiring a handicapped permit and being a parent.

The elderly for example. As a parent of young children, and someone who has been pregnant, I would happily give that spot to a senior who was not feeling up to the long walk that day. Many of them put in their dues as pregnant women without special spots just for them. I’m okay with allowing them one now.

People will invisible illnesses or disabilities? Sometimes people have flare ups. They may not need a handicapped permit most of the time, but on that day, they are in a great deal of pain. Please, take my spot; I will walk with the kids a bit further.

What about women with high-risk pregnancies? That’s valid. But as it is right now, there is no guarantee those spots won’t be filled by other parents, so if parking close is a necessity, women with high risk pregnancies are entitled to handicapped permits, and they should absolutely use them.

“But,” the haters say, “they are for parents. It says so right on the sign.” One mom even tapped the sign with her finger when an elderly couple got out of the car (because screw basic decency.) I’m not denying it says that. That is technically what those spots are for. I’m just saying they are courtesy spots, and while regular drivers give parents the courtesy of parking there, sometimes it’s nice to give the same courtesy to non-parents who need it more.

Also, many of the “Respect the sign!” people gleefully bragged about how they park in in the hybrid parking spots when the parent ones are full. Don’t point that out, though – they get mad.

I was also amazed by how talented some of these moms are. They can look at someone for five seconds and be able to tell not just if the person is pregnant or not, but their entire medical history. I’m not even sure why we have doctors when these women can diagnose people at a glance. They agree with me, some people might need it more, but that person was definitely an asshole in perfect health.

And sure, they probably were. I’m guessing a lot of assholes park in those spots because that’s what assholes do. I’m just saying that until my x-ray goggles come in, I’m unable to tell by looking at someone what they have going on in their lives right now, and I’m not willing to take the chance in chastising them.

Nasty notes and snide comments can ruin a person. Dramatic? No. You never know what someone is dealing with at any given moment, or how much that note will impact them. Imagine your worst day, then picture receiving that note. Is it worth it for the two-minute feeling of satisfaction you get?

“Why don’t we just get rid of the spots entirely then?” quipped one mom. She was being sarcastic (I was the enemy, remember) but I thought it was a good idea. As parents, we feel entitled to these spots, but we’re not. They haven’t been around that long, they were placed there as a convenience and a draw for the store. Many parents already often feel like the world should cater to them and their children. I’m not one of those parents.

I’d far rather see a blanket courtesy spot for people who especially need it that day. It’s already on the honour system, no one is going to arrest someone for using a parent spot, so the same would apply. It would be used mostly by people who needed it, and also some assholes. Great idea, irate Facebook mom, let’s get rid of the parent spots and do this instead!

So, Parking People, chill out. Save the rage for real problems. It’s just a parking spot.

RELATED: 6 BS Things You Should Never Say to a New Mom