That Time I Cried Over a Fried Chicken Sandwich

People will judge me for crying over something so trivial, but let me break it down for you. It was not JUST about the fried chicken sandwich. 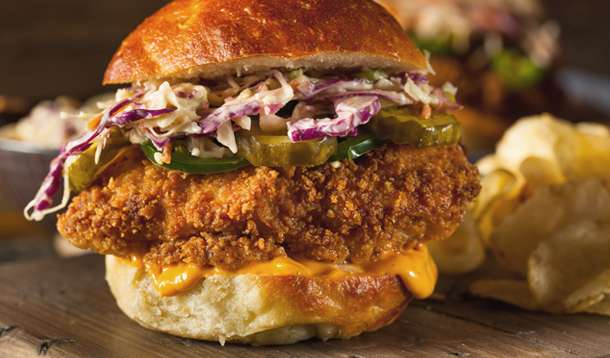 Something happened that left me crying for almost two hours.

What would that have been? Crying screaming baby? Sleep deprivation? Being peed, pooped and/or vomited on? The inability to shower whenever I wanted? Nope. None of these reasonable and understandable facets of motherhood.

Instead I was crying for two hours because of a fried chicken sandwich.

Let me go back and explain the entire situation.

It was a fairly mundane week. Kensi, my mom and I had fallen into a quasi routine during the week and so that particular day was no different. That early evening, my mom was making dinner, I was playing with K, and Dan was just coming home from work.

We all sat down for dinner chatting about the day, and I was monitoring the clock closely because Kensi always tries to sleep around dinner time, and I’m always trying to prevent her from snoozing because I want to put her down for 7 PM (don’t even get me started on this 7 PM bus that apparently all babies are supposed to be catching).

Anyways, the previous couple of days she had been graciously falling asleep at 7 PM and not waking up until hours later, so that night I asked Dan whether we should take advantage of this and jet out to Sherway Mall after we put her down so I could return a pacifier I had bought a few weeks earlier. I got it at the Well.ca store and it’s this ‘natural rubber’ pacifier that I wanted to try on her but unfortunately I’m not as sharp as I use to be and I didn’t realize I had purchased the wrong age category. The soother was for 0-3m and Kensi was just a week or two shy of turning 3 months, so it would have been useless for me to even open it up to try.

The mall was closing soon, so Dan asked me to figure out the closest entrance to park at so we could jet in and out of the store. Well what do you know but the entrance was RIGHT next to the newly opened restaurant Union Chicken.  If you haven’t been there yet you must – it’s SOOO good. Dan and I had gone a few weeks earlier, so being close to the restaurant again reminded me, DAMN I REALLY WANT TO HAVE THEIR FRIED CHICKEN SANDWICH.

ME: “Hey Dan, while I run into the mall to return the pacifier, can you run into Union Chicken and get me a fried chicken sandwich? PLEAAAASE.”

DAN: “I already am your best friend. And are you SURE you want a fried chicken sandwich because we literally JUST ATE DINNER!!”

We hopped back into the car and I couldn’t stop talking about how excited I was. I even thought about how I was going to eat the sandwich when I got home because I didn’t want my mom to be offended that I was essentially eating another meal right after eating the meal she made for us. I even debated secretly eating the sandwich in my closet so she wouldn’t be upset!

We got home and I thanked GOD my mom pretty much goes to bed soon after Kensi goes down, so we were all alone in the dining room and I’m excitedly ripping open the bag to get at the container that the fried chicken sandwich was in.

I opened up the container and I was stunned. OH NO THEY DIDNT. THEY GAVE ME THE WRONG ORDER. NOOOOOOOO.

Instead of a fried chicken sandwich, I was met with a heaping pile of wet, sopping pieces of chicken covered with gravy and peas. WHAT IS THIS MESS.

That’s when I was worried steam might blow out of my ears. How DARE they mess up my order!

That’s when Dan interjected, “Uh oh… I thought that was the fried chicken sandwich.”

ME: “HUH? What do you mean? You did this? You mean they didn’t give us the wrong order?”

DAN: “Ummm I ordered the Truck Stop Chicken Sandwich… because I thought it was fried.”

ME: “I’m sorry what? I don’t quite understand. You ordered THIS sandwich and not a FRIED CHICKEN SANDWICH?”

DAN: “I thought that sandwich WAS a fried chicken sandwich.”

I proceeded to then pull up the Union Chicken menu because I didn’t understand what was going on. I was honestly baffled. Was I not clear when I said “fried chicken sandwich”? Could I have somehow given confusing and unclear instructions?

Dan apologized profusely and said he just wasn’t thinking when he ordered and made an honest HUMAN MISTAKE (his words, “I’m HUMAN, I made a mistake!).

But his apologies fell on deaf’s ears because it didn’t stop the big fat tears falling uncontrollably down my face.

I know this sounds preposterous and many people will likely judge me for how insane I am for crying over something so trivial, but let me break it down for you. It’s not JUST about the fried chicken sandwich.

I cried because I’m home all day long with the baby and that fried chicken sandwich was the most excited that I had felt that day, and to not have it felt like a crushing blow to my soul. When you’re on mat leave, it can be very isolating – physically and emotionally, so when you have something that you get excited by (seemingly big or small) you get REALLY excited by it. And then when it gets taken away from you quickly and abruptly – you get REALLY devastated by it.

I cried because it felt like I was being as crystal clear as possible, but it seemed like nobody was listening to me.

The next day, EVERYONE devoured the fried chicken. And then I felt vindicated, I said “HA! See! People WANT fried chicken! And you tried to stop me!” I wish I had gotten MORE fried chicken because it didn’t seem like there was enough.

Ever since then, fried chicken has become a symbol for when Dan tries to be responsible and rational, usually talking me out of some irresponsible craving or zany idea that I have (like that time I wanted a horse lamp that cost $3k from ELTE but Dan rightfully said no way jose. I still wish we had gotten it because hello, it was on sale from $7k!). Most of the time Dan’s level headed, rational and logical mind is right – in fact I would openly admit that about 9/10 times he is right and I’m wrong.

But sometimes, very rarely but it does happen – I’M RIGHT. And I feel vindicated that my nutty idea or suggestion is valid. Sometimes it’s ok to throw caution to the wind and just indulge in your craving, no matter how irresponsible, gluttonous and indulgent it is. Because it feels good but mostly because it TASTES SO DAMN GOOD.

So yes, I was mostly crying uncontrollably in that moment because I was so disappointed at not getting something that I thought was already in my hands.

But I think some part of me was also crying because it felt like that zany, indulgent, gluttonous part of me that use to just do whatever she wanted without needing to think about someone else was being extinguished.

And that’s what I’ve come to realize is the challenge and dilemma of being a new mom for the first time. You have to balance being the person you use to be (selfish, indulgent, gluttonous, irresponsible, etc) with the new person you become, which is someone who is responsible for another human being 24/7.  This can be amazing and fulfilling in many ways because you’re essentially growing and shaping someone who can turn out to be super awesome and it’s all because of you. But it can also be exhausting, tiring, thankless and downright draining because it’s a LOT OF WORK, DUH!

By the next day – I apologized to Dan for being a maniac the night before and he of course apologized again for his genuine mistake that he made. He even offered to drive back that evening to Union Chicken to get me the sandwich.

But alas I said no – it’s too soon and still stings. In that moment, I didn’t feel like I could even look at a fried chicken sandwich the same way again without being reminded of the time I cried nonstop for 2 hours like a crazy person.

But ya know what? The universe wanted to nudge me along and tell me to GET OVER IT.  I swear to god when in doubt, ask the universe for answers and most of the time the universe will surely answer. I don’t think it’s any coincidence that THISarticle came out yesterday – Toronto Life publishes “The 15 best fried chicken sandwiches in Toronto right now.”

The universe wants me to get over it, stop crying, and realize that my new life is very different now but I can still enjoy the things that I use to enjoy, and I don’t have to lose everything about my old self and life in the process.

Oh yeah, the universe also is clearly trying to tell me to go GET A FRIED CHICKEN SANDWICH ALREADY.