Mermaid School Should Be on Every Grown Woman's Bucket List

I felt so feminine and free. It was lovely. 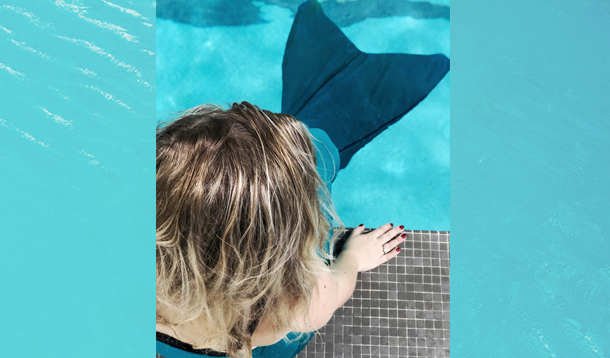 Ever since I was a little girl, I’ve had a thing for mermaids: I actually called my best friend to tell her when the mermaid emoji came out, I’ve got a mermaid tattoo just waiting to happen, and when my younger sister told me at age four - in earnest - that she wanted to be a mermaid when she grew up, I’ll admit - I was jealous that I hadn’t thought of that first.

When I found out that AquaMermaid had opened one of their five Canadian locations in Toronto, giving anyone aged 7 and up the opportunity to swim like a siren, I jumped - er, splashed - at the chance. I signed myself up for the hour-long class - which includes a brief swim test of one lap without drowning - some instructions for basic mermaid moves, and about 15 minutes for photography. Because, Instagram.

It was really low-key, there were three other people in my class. Our instructor was able to cater to each of our wants and intentions to do more or less during our time together.

What did I learn from mermaid school?

First, that swimming like a mermaid is really, really hard.

Losing the balanced motion of two legs kicking in water opposite your arms makes you realize just how much core strength is involved in living out your Daryl Hannah dreams. Because I was there to simply relish the delight of having a tail, I used a water noodle for added support; once I got that system locked down, I wasn’t concerned with “floundering” around and just had fun.

Second, the beauty of having your own turquoise tail will over shadow any vestige of body image issues you have.

I was so caught up in living this dream that I got myself into a high waisted bikini and loved the confidence of being free to embrace every beautiful curve that added to my mermaid mystique. I felt so feminine and free. It was lovely.

Third, there is pure joy found in doing something that you love.

I am a fan of anything that wakes up your inner child inside you and makes her happy; floating around in the pool, quietly singing Part of Your World to myself not only made me feel like an actual mermaid, but also made me feel like I was a kid again…and honouring that part of me that is still very much alive.

You can book a class for yourself or your kids, host a birthday party there, and this would be a pretty fun and atypical bachelorette or shower idea too. All you need is a bathing suit, towel, and sense of adventure, and you’re ready to go.