No one asks me if it's my first anymore. 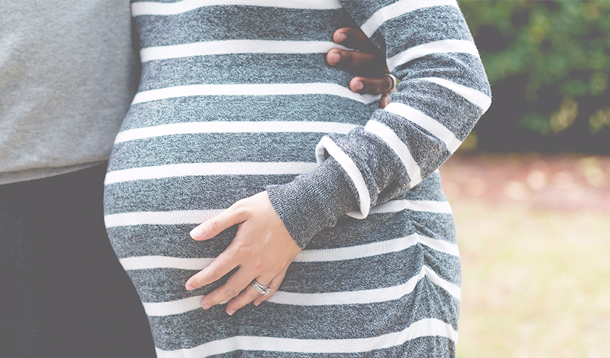 I was pregnant with my first 9 years ago, but I still remember it like it was yesterday. Once the elusive bump made its appearance, I meticulously dressed in cutesy maternity garb that I relished shopping for on weekends. I was as committed as ever to my exercise regime—healthy pregnancy, healthy birth, healthy baby and all that. I soldiered on through sickness and discomfort determined to work right up to my due date, convinced it was somehow my feminist duty to prove pregnancy wouldn’t hold me back from my former life.

Something else I vividly remember is the adoring looks from strangers, usually women older than I was, who at a restaurant or on the street corner would behold my bump, smile and ask the question, “Is this your first?” I would return the smile and answer tritely ‘Yes, three more months to go!” or some such nonsense.

At first, I never thought much about these exchanges, maybe even enjoyed the attention a little, but after the fifth or sixth time of being asked the same thing, it started to irk me a little. When someone asked, “Is this your first?” did they do so with a knowing look? Perhaps with a subtle air of superiority? Did they think they were somehow omniscient of my entire future based on my answering yes to that question? I couldn’t put my finger on it.

Fast forward five years, and I am pregnant with my third—same pregnancy clothes, not looking so cutesy three growing bellies later. I get my exercise, but it’s no longer power walks on my lunch break (lunch break? Ha. Do those two words even belong in the same sentence?). These days, I get my cardio from the never-ending daily marathon of household and child rearing tasks that now dominate my existence. My back, feet, and brain are so exhausted that most days I waddle about performing only the necessities before convincing a busy toddler to play “put mommy to bed” again. If I had a job, I know without a doubt, I would’ve thrown in the towel six months ago.

It is noteworthy to add that not a single person during this pregnancy asked me “Is this your first?” – not even once. Why would they? If the two children screaming in my grocery cart or the toddler melting down on the playground weren’t evidence enough, the bags under my eyes, the shabby state of my appearance, or the extra layers of softness around my middle would surely tell the story.

Last Tuesday, I was waiting in line at an inordinately long checkout when I saw her. She made small talk with my toddler who, in his crazy antics, managed to land himself rather ungracefully on her foot (she’s wearing heels, I note). She was gorgeous—glowing—hand in hand with a fresh-faced husband and a bump I would put at around 7 months. She greeted me politely with a nod and an easy smile, and the question was on the tip of tongue…

“When are you due?” I ask instead, and we make small talk until the line dwindles. She was attentive and sweet, and I was distracted but happy for the adult interaction. I wished her luck, and she went on her way.

In that moment, the other shoe dropped. I understood—the knowing looks, the air of omniscience, the question—is this your first? I pray I had the presence of mind not to gawk right then, but there’s nothing quite like it, you see, to come face-to-face with the ghost of your former self—the one you were before motherhood wreaked its complete, irrevocable transformation on your life. Of course, I was not omniscient of this woman’s entire future or personhood, but I couldn’t help but imagine with equal parts horror and wonder what the next few months of her life would be like would be like. I wouldn’t like to think of myself as superior, but I did see in that woman – and her beautiful bump and her young, unwearied face – a vision of my former version of myself. A vision that, happily and tragically, I will never be again.

A friend of mine once told me “You can have many children as you like, but you only become a mom once.”

How true. Of course, everyone’s experiences will be different, but I can say without a shadow of a doubt that the first few months of my firstborn’s life were the most challenging, painfully transformative, and wonderful of my entire life—the emphasis being on the first two of those descriptors.

Motherhood does come with its gifts. Aside from the love-filled wonders I couldn’t even begin to describe on this page, there’s the thicker skin, the feeling of purpose, and the small bits of wisdom you gain along the way.