This is My Midlife Crisis

Welcome to my Saturday night. 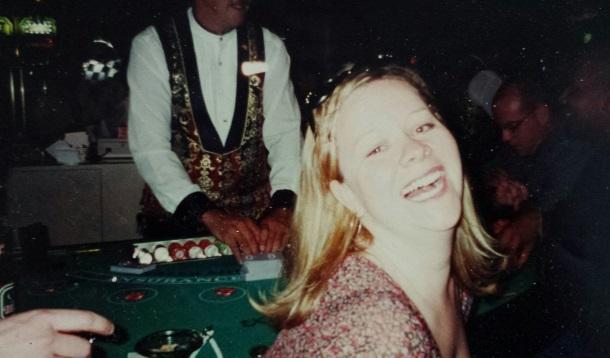 So, something happened last night. I had an “Aha! Moment.” I know this is an Oprah thing, but since I’ve never watched Oprah, I am just going to go ahead and assume she means that moment when you realize you’ve TURNED INTO A GIANT FUCKING LOSER.

I was just plating our dinner (How’s that for an obnoxious term?) when I took a bite of the salad I’d made (I make salad every night, EVERY NIGHT, so I am not sure why this is a big deal.) and called out to my husband “WOW, I really knocked dinner out of the ballpark tonight!”

He didn’t really hear me, because he was busy talking over me, telling me who he would pick as his dream cast for the “Ultimate Ghostbusters Reboot.”

I stood in the doorway, holding our plates with my award winning, grand slamming dinner on it, staring at him as he then went on to say “For the record, they DON’T NEED to do a reboot. BUT since they are I love that it’s women and love the women they’ve cast, but I’ve heard they are also doing a men’s one, which is SO STUPID and thank god they didn’t do the one they had talked about years ago with Chris Farley and Adam Sandler BUT IF they do end up doing another one, and I could cast it, it would be Will Farrell, that funny Asian guy who’s in EVERYTHING right now (Randall Park), Chris Pratt and Kevin Hart.” “Oooh. Great cast!” I say. “I’d hit all of that.” I also say, because I always like to keep it classy.

We sit down, I hand him 40 napkins and say “Okay. We can eat on the new couch but PLEASE be careful.” Then we watch Netflix. We don’t actually watch a full show or movie, we scroll for a half hour pointing out all the things we could watch, and WANT to watch, but not tonight, because I have super anxiety and can only handle comedies.

A bottle of wine and some chips follow, and then I force him to rub my bunion. Welcome to my Saturday night.

How did this happen??!!?? I used to be super fun and funny. I used to go out, and work nights and have crazy adventures and still manage to get up early and function. Now I can’t even handle staying up late. I complain about never getting invited to parties, but when I do, and the start time is after 9pm, I say “WHAAAAAAAAATTTT, WHO leaves the house after 8??” in a super high pitched voice, and usually don’t go. I went to my friend Laura’s house, and stayed until 2:30 AM, and am still trying to recover three weeks later. I have actually been bragging about walking home at that time, as all the bars poured out onto the streets, and that the Domino’s Pizza was still open. STILL OPEN! Who even knew that? People under 40, that’s who. People way cooler than me, that’s who. Everyone else. That’s who.

I talked to my girlfriend about this, and said MAYBE just maybe I am having a midlife crisis. “But I am TOO YOUNG!” I said. She said “No. I think that’s about right. If anything, you should have had it about 5 years ago. Let’s face it, with your health and bad luck do you REALLY think you are going to make it to 80?”

Rude, yes. But not wrong. I don’t want to come right out and say I think I have a shorter life expectancy rate than others, but hey, some days MY ENTIRE LEFT SIDE DOESN’T WORK.

So, is this the midlife crisis? Am I two weeks away from getting a mom haircut? Is this the moment when my brain shifts to a new, comfortable spot where it stops keeping track of any new technology or cool music? Will I start wearing boxy shorts, fanny packs and cross trainers when I travel? Will all my tee shirts be from Northern Reflections? Will I start wearing bedazzled clothing??

SO MANY WORRIESOME QUESTIONS.

My biggest worry is that I have been this boring and middle aged my entire life, but that I am only realizing it now, as age brings some sort of wisdom. (It must, right?)

This was totally not what I pictured doing with my life. Do you know how I spend my days? Writing up “Fun Family Recipes” for Mom blogs that I never actually make, and get paid in gift cards. (Right eye twitches as I die a little inside.)

I can tell you this. Starting NOW I am going to make some changes. (Totally a thing someone says who’s having a midlife crisis.)

I won’t be buying a sports car or going on a fancy trip. Did I mention so far I also sort of suck at being an adult? I think I must HATE money. I have to get rid of it the second I get any, so these two items are definitely off the table.

I won’t train and run in a marathon either. I may be having a midlife crisis, but I am still super lazy. I probably won’t lose the baby weight I’ve been carrying. I won’t sky dive, change careers, or get plastic surgery.

I’m not sure what I’ll do, but it will be something. Or worse, my biggest fear, I’ll do NOTHING. Just get older and MORE BORING. I am frowning as I say this. Which I shouldn’t do, because now I have lines on my mouth that resemble a ventriloquist dummy.

40 is NOT the new 30. Only old people say that. Old people with Howdy Doody mouths and accordion foreheads.

Something’s gotta give, and it can’t be my hip.

Tara is a mom of two boys ages 18 and 10, from Toronto, Ontario. With her baby days behind her, she is working her way towards being a Crazy Dog Lady. Tara loves long walks on the beach, naps and potato chips. She has also been known to just sit and stare for hours. Tara hates housework and never has any money. You can find her on Facebook, IG and Twitter as @junctionmess or on her blog, www.junctionmess.com.