Hello, Son. It's Me, YOUR Mother

I'm a feminist and you will be too 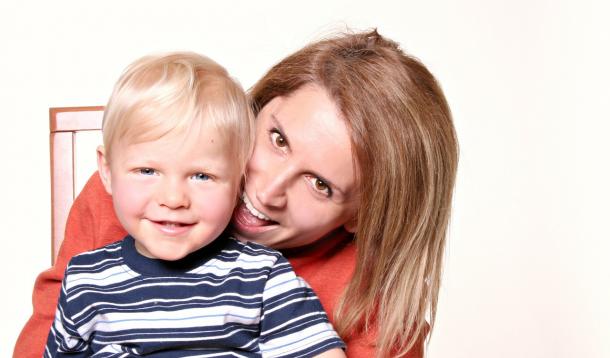 To My Darling Son,

I think you should know that I am a feminist. There, I wrote it. I've said it. I've even screamed it at various points in my life. But, what does it mean for you and for me? I'm NOT some man-hating, refusnik of shaving my legs or armpit hair, Birkenstock-wearing (actually, I love my Birks and wear them in the summer, but I love my Prada shoes, too), birthing my babies in the woods, crunchy gal. Those are great women too, simply because being a woman is wonderful. Women who are feminists come from all walks of life. I'm a happily married woman, working mother of two young babes, with two law degrees, who enjoys manicure-pedicures, reading, writing, shopping, travel, fine wine, art, theatre (wasn't Avenue Q the best?), air conditioning in the summer, and a great steak at Mastros, and believes that feminism is about equality for women in every walk of life, having the freedom to choose to do what we want, and having said freedom, equality, and rights protected by law.

In that vein, I would like you to know that I plan on raising you NOT to be a male sexist, chauvinist, or misogynist.

I fully intend to raise you to be a feminist, just like me, your father, your sister, your grandmother, your grandfather, and your aunt. If you respect me, you HAVE  to respect women.

You are the son of a strong woman who pursued her dreams. I encourage you to pursue this just as I have and continue to do.

My dear, sweet son, you are the brother of a strong girl who will one day be a strong woman, and you should fight for and protect her right to have the same opportunities you will have to achieve her goals.

You need to look beyond gender as a qualifier, and that every law abiding, honest, and respectful human being is deserving of the same prospects in life regardless of whether that person is male or female. Neither women nor men are playthings. When I had you, I wrote a satirical poem taking a jab at how men have mistreated women throughout history, which is something I never want you to do.

I'm not advocating against casual relationships. So long as both of the participants in the sexual equation are consenting adults, in it only to have fun, there is nothing wrong with that because both have equal power.

However, you will also know that women are to be valued equally as men, to treat them with reverence and love, while respecting and protecting their freedom, equality, and right to do everything and anything they want, just as a man would.

My dear boy, as you grow, you will encounter many men who desire to subjugate and keep women pinned under the heel of their shoe. Women like your mother, your sister, your grandmother, and any female friend you make. That's right, she who they seek to undermine, pay less for the same work performed by a man, objectify as a sexual entity who can cook, clean, and birth babies for, cheat on, demean with their words, discriminate against, and even in some horrific cases physically abuse, rape, and kill.

When you meet Mr. Misogynist, I hope that you will question him, asking him how is it that he feels entitled to believe that he is superior to a woman. My son, I will not mislead you. It's true that a man, or in the case of assisted reproductive technology—his sperm, comprises 50 percent of the genetic material used; however, the brunt of the work of creation and growth of a human being falls on its mama. For plus/minus 40 weeks, I housed you, shepherded you through the most fragile stages of evolution from zygote until you were ready to greet the world, yet once so many men grow up, they forget all about that, choosing to denigrate the gender without whom they wouldn't have the luxury of being born. By the grace of women, all men walk the Earth. I truly hope that you will never forget this. If you ever are in need of a reminder, please ask and I'll tell you all about what my pregnancy with you was really like.

I wish I could tell you that I have the answer as to why and how these men, your chromosomal peers, could adopt such Neanderthal-like thinking. Sadly, I don't.

If I was pressed to give you an answer, my personal belief is that the majority of Mr. Misogynists out there arrived at their ill-conceived mentality through a variety of influences, some of which may have included what they were taught by their parents. I would like to believe that no parent would ever want to teach their son to be sexist towards women.

To the Mr. Misogynists out there, I beg of you to ask, where did you go wrong in life? At what point in your lives did you stumble upon a fork in the road, taking the path poorly travelled, deciding to turn your back on your DNA? Was it in the boys' locker room after the big game, patting each other on the bum, congratulating each other for the touchdowns, goals, and home runs, leading you to believe that you're the stronger sex? Was it when a girl outperformed you in math, science, English, or history class, which invigorated your thinking that she had no right to be smarter than you? Was it when you burned your soufflé in home economics class, and a female classmate earned an A+ for hers, leading you to believe that a woman's place is in the kitchen? Or was it when you had a crush on the prom queen, but instead of accepting your offer to take her out to dinner, she turned you down?

You have a sister and I need you to know that neither gender is superior to the other. Boys and girls are able to outperform the other equally in every walk of life without penalty of being relegated by anyone to a predetermined role in society. No woman should be paid less for the same work performed by a man. No woman should be told she is of the weaker sex, and thus incapable of being considered for a job opportunity, equal rights, or the ability to do whatever it is she wants to do. No woman should be treated like a piece of meat ripe for the plucking by a man to fulfill his sexual desires. Darling boy, would you want someone to treat your mother like that? How about your sister or aunt? I hope your answer will be NO, so that when you see other men doing this, you'll be able to confront them, telling them that it is never okay for them to do that to someone else's mother, wife, sister, aunt, or daughter.

This Is What a Feminist Looks Like. Beard and All. Will you join the list of men who are taking a stand against gender inequality?