Ten Tips on What To Say To Families Who Have Adopted

Know someone who has adopted? 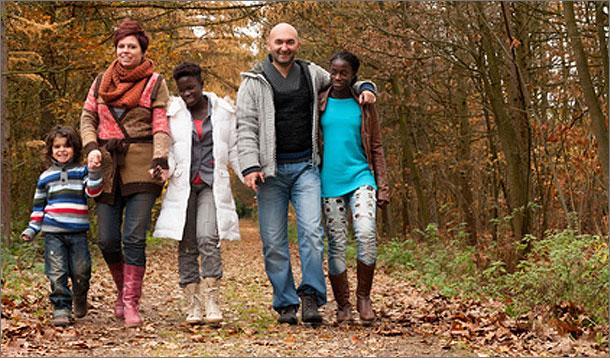 Have you ever met or do you already know a family that has a child that they adopted? Did you feel awkward, uncomfortable, or don’t know what to say or how to act, like the adoption is a giant pink elephant in the room? Don’t feel bad. Often people are nervous about the “right” things to say or do when they meet or even already know families that came together through adoption, especially adoptions of children from a different race.

There are so many blogs and articles telling folks what NOT to do in these circumstances, it's time to provide a few tips on what TO do so that people don’t have to feel they need to walk on eggshells around adoptive families. We’re not a minefield and are usually approachable about adoption, as long as certain considerations are respected.

Here is a list of things TO DO when you encounter a family with a child or children that were adopted, or you suspect were adopted:

1. DO refrain from any of the following questions, or questions similar to these:

3. DO ignore the fact that the child most likely does not look anything like his or her parent and feel free to discuss the weather, politics, religion or anything other than commenting on which of the parents you think the child looks like, especially if the child is of a different race or skin colour than the parents. If you must comment on the child’s looks, do tell them they are gorgeous, handsome, cute, adorable—you get the picture. DO also add in your comments that the child looks/sounds/seems very bright or very kind or something that also acknowledges more than just their looks, so that they don’t feel like their looks are all they have to offer (this can actually apply to ALL kids, not just ones who were adopted!).

4. DO refer to the child having “been adopted” or “was adopted” as a past-tense verb, not a pronoun or adjective. Say “Little Suzy WAS adopted” not “Little Suzy IS adopted” because adoption is not a medical condition, and even if it were, people with medical conditions such as diabetes, autism and epilepsy are far more than just diabetics, autistics and epileptics. Adoption is a process that families go through to become families, it is not a description of who or what a family or a child or adult who was adopted is.

5. DO use your own imagination about why the child’s birth parent(s) made an adoption plan and leave that question unasked. That’s private information and often not even known. Even if it is known, sometimes there are painful details as part of that story, and while it should not be treated as a shameful secret, it is a private part of an adoptee’s history. DO simply make the assumption that in some way or another, life with the family who adopted them was intended to be in the best interest of the child who was adopted. That’s really all that matters, isn’t it?

6. Do talk about how lucky our family is, not how lucky the child we adopted is. Unless you have some definition of luck that we’ve never heard of, it is not lucky to be separated from your birth parents at any point in your life, or to endure waiting in an orphanage environment, foster home (or worse) for some unknown strangers to come take you away from the only environment you know and sometimes speak to you in a language you don’t understand, nor is it “lucky” to often endure abuse, neglect, malnourishment or dehydration prior to adoption. Our family is beyond lucky to be blessed with the amazing child that adoption brought to us, not the other way around. While there may have been an element of wanting to help a child who needs a family in some people’s decision to adopt, we are not angels of charity – our primary reason for adopting was to add a child to our family, not to promote ourselves as do-gooders and our child as the “lucky” recipient.

7. DO empathize that the mother (and father!) may also be sensitive to the loss of fertility, pregnancy experience, birth experience or the loss of all kinds of “firsts” in the child’s life (first smile, first tooth, first steps, first words, etc) depending on the age that the child was adopted at. DO understand that any kinds of comments about how the adoptive family had their child “the easy way” is an insult and demonstrates ignorance on your part regarding the financial, emotional and sometimes even physical efforts required in an adoption process.

8. DO keep your comments about pregnancies that happen immediately after adoption to yourself. Adoption is not a fertility treatment, and if we do actually conceive, what we “will do” is welcome that child into our family exactly the same way we welcomed the child that we adopted. A bio child is not the ultimate prize over a child through adoption and asking such questions in front of our child who was adopted only serves to make them feel that they were the Plan B consolation prize.

9. DO be prepared to accept gentle education from some adoptive families. Our family is one of many that tries to not take offense to unintentional violations of the above tips, but we do also feel it is our obligation to our daughter and other children of adoption that we politely correct someone if they have said or done something that could possibly hurt or disrespect our child and her family, both adoptive and birth.

10. DO feel free to open up a respectful conversation about adoption, using the above guidelines. They are not meant as intimidation factors. We are not ashamed or embarrassed of our adoption, and most families enjoy talking about most aspects of their adoption journey, although some families do opt to keep certain details private. So do also be prepared to hear “I’m sorry, that’s something we keep private” as a response and respect that. A great opening line, if you are genuinely interested in adoption, is “I’ve always been curious about adoption and how it works. Would you mind if I ask some questions?” If you have a smile on your face and friendly curiosity in your heart (not nosiness in your eyes and mind) than there are few families that won’t share their beautiful, fantastic stories of how their incredible family came together.

On New Year's eve 2006, I married the man of my dreams. Well, ok – the second man of my dreams after the first dream ended in divorce. Seems the 1st and 2nd men of my dreams both have the same first name, but that has benefits sometimes.... With my man came his awesome mini-me son who lives with us 50% of the time so I got a 2-for-1 deal.  I always wanted children (that called me "mommy"), so after we married, we marched off to the fertility specialist. Scads of money and tears later, no baby appeared, so we began a new journey to adopt internationally.  Our brilliant daughter has been a part of our family since 2009 and is the joy of my life. Being a mom through adoption is hard. Being a stepmom is hard.  Being a transracial mom is hard. Being a mom of ANY kind is hard, as well as the most rewarding experience you could ever have. Come read all about my momiverse in my crazy, busy, fruity, sweet and spicy blog at: http://mypapayajambalaya.wordpress.com/