Tooth Fairy Tidbits: Everything You Need To Know About The Tooth Fairy

There's a whole market dedicated to this rite of passage 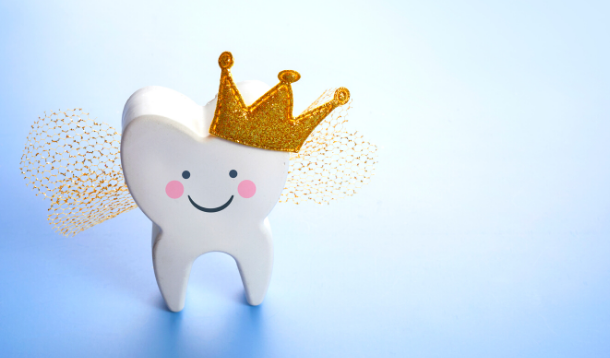 My son lost one of his bottom two incisors first.  It was loose for a solid three weeks before he plucked it from its snug little socket. Moments later he realized that the neighboring incisor was also loose.  He lost his second baby tooth the very next day. This flurry of dental activity prompted me to brush up on my Tooth Fairy knowledge — I would gather fun facts I could share.  And then I ate my son’s tooth.

What can I say? I was distracted.  I’m a parent. I set the tooth down on a counter and started busying myself with things in the kitchen. But it was the chocolate chips that did me in. I was compulsively popping chocolate chips into my mouth while obsessing about concerns unrelated to me.  Christmas had just passed, so I didn’t second guess the small bit of candy cane detritus on the counter. Instead, an ingenious thought hijacked my brain — peppermint chocolate. I popped the little bit of leftover candy cane into my mouth and chomped down.

The alarming crunch, as if I’d just chomped a pebble, propelled me to the kitchen sink immediately where I spit out shattered bits of my son’s second baby tooth. I wiped my mouth and dutifully made my way up the stairs towards my son’s bedroom to place some glittery bills near his sleeping head.

My first lesson in all of this bears no repeating. Don't eat your child's tooth and if you do, I’d simply caution against swallowing.

Did you know that you can actually preserve baby teeth for later use of stem cells?  Not, like, stomach acid, but cryogenic storage at a tooth bank.  There are costs associated, but the stem cells can be used should your child ever need them.

When my 6-year-old lost his first tooth, I discovered a whole market dedicated to this rite of passage.  His lost tooth gave way to hours lost browsing tooth fairy-related web results.  Gone are the days when one simply sticks a tooth under their pillow in hopes of getting a quarter.  There are flattened fairy coins, fairy dust, wands, glittered envelopes, tooth pillows, and more.

Today’s parents are anything but unified when it comes to rewards. Initially, I was frustrated to learn that some kids get the big bucks in place of lost teeth.  Why do some parents set the bar so high? How am I supposed to explain the inconsistency to my kids?  Then it occurred to me that none of us have actual money in our possession.  If you are anything like me, despite the temptation to create a Venmo account in my son’s name, a lost tooth means a last-minute trip to the ATM at midnight and last I checked, ATMs aren’t ejecting quarters.

Congruent Tooth Fairy facts are as hard to come by as a quick quarter.  When my son lost his tooth, both he and my daughter had questions. Naturally, I took to Google, but the answers were all over the board.  For example, some think the fairy grinds collected teeth to be used as fairy dust. Others believe the teeth are used as building materials in some fairy village. Not only are they inconsistent, these theories are anything but magical in my mind.

Cultural practices related to lost baby teeth vary, too.  In some places, kids bury their lost teeth.  Some countries rely on mouse or a moose to take care of lost teeth. Then there is the kids' book, The Tooth Fairy meets El Raton Perez, which introduces the rat that many Spanish-speaking countries use in place of a tooth fairy.

As a matter of fact, there are several great reads on the topic. The Night Before The Tooth Fairy, How to Catch the Tooth Fairy, and the Tooth Fairy Wars are just a few.  Better yet, if this whole Tooth Fairy phenomenon is gnawing a hole in your wallet, most of these books can be found at your local library.  As a reward for our second lost tooth (the one I ate), our Tooth Fairy left a note promising the arrival of an easy reader, Tooth Fairies Night.

My kids are 6 and 4, so I’ve got a few more years to perfect my adaptation to this role.  While I do, I’ll continue to enjoy the fun and magic that ensues.  At some point I might consider cryogenically preserving my kids’ teeth; their wisdom teeth, perhaps. For the time being, however, I should probably focus on preserving my own chompers. My dentist would probably frown upon my munching another tooth.

Robin lives in Denver, Colorado with her husband and two kids — age 4 and 6.  An anxious people-pleaser, Robin’s go-to coping mechanisms are sarcasm, sleep, and sugar. Robin enjoys writing when her creative juices haven’t been sucked dry by the aforementioned family members.  Her personal blog is Not Actually Sweet. Her work has also been featured in The Mighty & Mile High Mamas.