Should We Praise Kids Even If They Aren't Good? 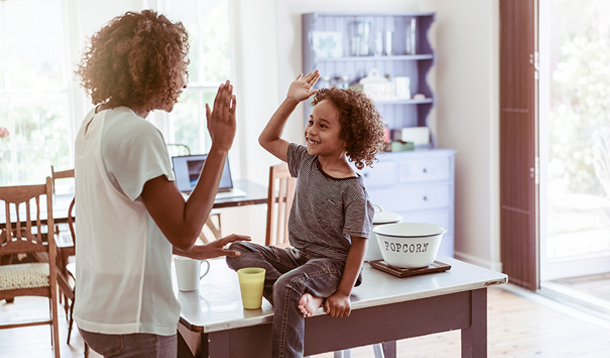 As we heard my name called from the podium, my mom and I shared a look across the crowded middle-school auditorium. I’d won an art award – and it was hilarious. I accepted the award, graciously, and then when the ceremony was finished, my mom and I had a good laugh. We both knew I had won that art award because most of my class acted up during art, and I behaved.

This was a, “Thanks for not being a little shit” award, not a reflection of my artistic ability. How did I know that? Easy. I had none. I knew it, my mom knew it, I’m positive my art teacher knew it, yet here I was, art student of the year.

The irony of my literal inability to draw a stick man was that my mom was a middle-school art teacher. My sister had inherited her artistic talent, but I most certainly had not. A few years later, I would go on to draw a mermaid for a five-year-old whose mother would compliment her on her great work. I was, and still am, convincing as a kindergartner when it comes to artistic prowess.

My mom never had me under the illusion I was an artist. Does that mean she ridiculed my work, or discouraged me? Of course not. She offered me the same art activities she did my talented sister, and encouraged my efforts. When my sister’s portrait turned out like Mona Lisa and mine resembled Joe Piscopo, she recognized that my innate talent, or lack thereof, was less important to the exercise than my enjoyment of it and the benefits of learning how to learn.

It seems counter-intuitive, but blindly praising our kids can actually hurt their self-esteem in the long-run.

I had a conversation recently with a psychologist friend who reiterated that constantly labeling our kids as amazing, even when they aren’t, creates more dissonance when they inevitably do fail. If they think they are awesome at something, full stop, and then they are met with even a brief indication they aren’t, that can cause them doubt the label and themselves.

Teaching them to value putting in the work is much healthier. Teaching them that failure is part of the process, and praising them for their hard work more than empty compliments on their finished products gives them usable, applicable tools.

So don’t lie to them about their talent. But how do you find the right balance between “everything you do is awesome,” and “dude, that painting straight sucks?” I don’t have the one right answer, but, in our house, it comes down to being both positive and realistic.

My son is a fantastic guitar player. He has a natural talent for it. His passion, however, is comic-drawing, in which he is far less innately skilled, but far more intrinsically motivated. Which do I encourage? The thing at which he has the potential to become truly amazing, or the thing that he loves doing? The answer is actually pretty simple – I encourage whichever one is in his hands. I don’t tell him he is the best artist I’ve ever seen, because he isn’t. I do tell him I like his comics, because I do. I praise the work he puts into them.

We even designed “merch” with his drawings on clothing for him to wear.

I don’t tell him he will for sure be a famous artist one day, I don’t know that, but I certainly encourage his efforts to. My friend David is a professional animator who has worked on big films like Moana and Zootopia. To say he is a talented artist is an understatement – but he cannot stand when people tell him they wish they had his talent. Why? Because it negates the intense amount of work and practice and effort it took him to reach the level of skill he is at. He frequently says that talent is great, but anyone can learn to draw if they put in the work.

So while I refuse to give my son delusions that he is an incredible artist now, who am I to say that if he keeps doing what he is doing he won’t one day achieve that goal?

So praise your kids, absolutely. Praise their hard work, their dedication, their determination, and yes even their talent. But let them fail. Help them acknowledge that not everything they do is great and that’s okay.

Encourage them to try new things until they find what sticks, and allow them to let go of what doesn’t. Maybe they won’t end up winning a wholly undeserved award - but they might just have a great sense of who they are, and love that person, faults included.