When Bullying Comes by Way of Exclusion 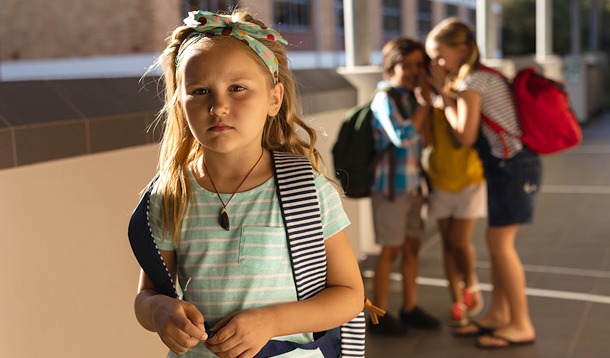 “Operation Heather X.” That’s what it was called. It was nearly thirty years ago when my friends devised a plan, complete with code name, to exclude me from the group, but I still remember it clearly. I was new to the school, my friends were not. We were in the gifted program, so the same kids were typically in class together for years at a time – but I was new. I was a threat.

My transgression had been making friends with Christy, who was formerly best friends with Leslie, and Leslie was not okay with that. It seemed the only thing to be done was to stage a coup. Word spread through the seven girls in our grade 4/5 split that, as of a certain time on a certain date, everyone was to stop talking to me, and to run away if I came near. Of course, I didn’t get this memo, and was thoroughly confused until I figured out what was going on – at which point my confusion turned to devastation.

We got over it. It was done by the end of the day, and everyone involved felt terrible. Leslie, Christy, and I remain friends thirty years later, and Leslie spent every party we attended through high school apologizing for having been a jerk to me for that day, when we were ten.

I’d like to say it was the only time something like this had happened to me – it was certainly the most organized one – but the truth is that bullying by exclusion was a regular part of my childhood. Two of the friends in our group of three would decide that day they were best friends and I wasn’t welcome. A group of peers would make a point of announcing there was no room for me to play the game, followed immediately by letting another child join.

I could fill this page with examples, but it all boiled down to instances where kids weren’t necessarily overtly teasing me,  they just made me feel like shit by letting me know I was not good enough to join them. It hurt. A lot. Probably more than mean words.

And now it’s happening to my son. My eleven-year-old has been coming home in tears because kids in his class have refused to allow him to play as part of the group, pointedly, often encouraging others to dismiss him, too. At one point, his best friend joined the offending group to avoid suffering the same fate as my son. It seems that exclusion remains a popular and insidious form of bullying.

Unlike when it was happening to me, I can see it for what it is, now that it is happening to my child. I have the benefit of years, experience, and objectivity to see that it isn’t about the bullied child at all. It’s about the bullies. I don’t use the term bully lightly – being mean is not always bullying – but this repeated exclusion absolutely fits the bill, and as with most cases of bullying, it says more about them than my child.

Further gentle probing revealed this to be true. Previous to his own victimization, these kids had gone after other kids, and my son had both refused to join them and stood up for the victims. He had told these bullies off for their cruel actions, rechanneling the aggression onto himself. Indeed, the day before his best friend had switched sides, he had been attacked. His abandonment of my son had been as I suspected – an act of self-preservation.

I told my son that if he joined this group, and started picking on someone else, his own bullying would stop, because it was never about him. I asked him if he was willing to do that. To my great relief, but not surprise, he said no. He refused to save himself if it meant inflicting harm on someone else. I told him that means he has integrity – something bullies can’t stand, but people of quality value.

When they are all grown up, the bullies will look back and regret their actions, but he will remain proud of his.

This is a point of pride for a mother, but of little comfort to a child in the throes of rejection. Then he did something that did surprise me. He took his best friend aside, and called him on his crap. He told him it wasn’t cool that he had thrown him under the bus, and that his friend would need to decide whether he wanted to be friends with the bullies or with him, because he would not stand for being treated that way by a friend.

And his friend surprised me too. He apologized. He put his money where his mouth was, and he left that exclusionary group in favour of friendship with my son. In doing so, he placed himself back into the target, and they are both still on the receiving end of the ire. But his act, and the consequences that followed, proved to both of them that this bullying has nothing to do with who they are. When this friend joined in the cruelty, he stopped receiving it. When he refused, he was bullied again. It was always about going after those with integrity.

Not everyone joined Operation Heather X. When I stood crying by the wall, a boy from our class named Ian approached me, in tears himself over the pain being caused to me. He yelled at the offenders. Screamed. It caught me off-guard, because I had always seen Ian as quiet and meek – he was neither when it counted. There was one girl in our group of seven who simply refused to take part. She hugged me, and told the others this was not right and she would have no part of it. Amanda was not popular. This could have been her chance to join the in-crowd, but instead, she chose to do the right thing.

I forgave my friends for what they did that day. My son has forgiven his friend for joining the bullies. But the lesson taught to me by Ian and Amanda remains with me to this day. I never was, and never became, close friends with them, but I respected them then and I respect them still.

The solution for bullying by exclusion is not to force everyone to play together. It’s to teach our children to value integrity over popularity and loyalty to what is right, instead of fear of being targeted. We need more Ians and Amandas. We need more kids like mine.