Please Keep Telling My Ginger Girl That You Love Her Hair 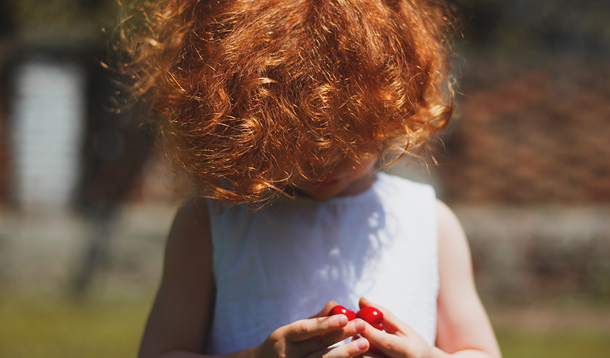 “Your daughter has the most stunning hair!” a random stranger says to me, while I’m shopping with my 2-year-old at Walmart. I smile at the woman, while placing apples in a bag, and ruffle Eloise’s hair in response.

“Thank you, we think so too,” I reply, and continue shopping.

This is not an unusual encounter for us. Ever since Eloise was born with bright red hair, we’ve been stopped by random strangers who comment on how beautiful her hair is. Friends and family often ask, “Where does her hair even come from?”

As our third and last little girl, we were surprised too when our youngest daughter was born with a head full of red hair. The hue is beautiful, a mix between copper and auburn, and we were delighted to have a sweet red-haired little girl. My husband and I both have light brown hair, and our first two daughters are blonde. It was unexpected, but welcomed surprise, and we had no idea how many people would end up commenting on her hair.

As soon as we started taking Eloise out in public the comments started. At first, I almost wanted to be offended. I’m not about constantly commenting on people’s appearances, and I didn’t want my daughter to feel defined by her hair. But I also think that there’s a positive side to this story. Her red hair is a gift worth celebrating, and I think it’s okay for others to notice and celebrate it, too.

Like many, I grew up with the typical stereotypes and mythology surrounding red hair. My brothers are both red-headed, as are some of my husband’s extended family members. I remember hearing my brothers talk about their hair like it was a burden. Kids at school would be teased for being “gingers” or “carrots,” and it was certainly not something I envied.

A popular story that my mom often told me was about the moment she thought I had red hair, just like my brothers. After I was born, my dad said to my mom, “I think she’s a redhead too!”

My mom said her heart dropped, she didn’t think it was even possible, no one on her side of the family had red hair. In the end, my hair was so dark it was nearly black, and the red had been a bit of blood, but that story always remained with me.

Now that I have my very own daughter who happens to have red hair, I want to change the narrative. I don’t want red hair to be a burden, and I don’t want it to be something that defines her. But when people stop as at the grocery store, or the park, and comment on her beautiful hair, I smile and accept it. Because I know with each kind and generous comment, my daughter is soaking up a new story. Red is beautiful, or as the popular children’s book says, Red is Best.

There’s another reason why I think it’s so special that my sweet little girl has red hair, and it’s not one I share often with strangers, or even friends. When my two oldest daughters were three and one, I received a phone call that would change my life. My oldest brother, my sweet redheaded brother, had died of a sudden heart attack. My brother, Jason, would never get to meet his youngest niece.

When Eloise was born with red hair, I said a silent thank you to Jason. When I see her hair, I see him. Death separates my sweet daughter from ever meeting her uncle, but their shared hair colour allows them to have a special and unique bond, and for that I am forever grateful.

Every time someone comments on my daughter’s beautiful hair I’m reminded of the gift of her hair. I hope that the kind comments will undo any unkind comments she might hear as she grows older, and I hope she’s always be confident in the beautiful hue of her hair.