Study: There Are Real Benefits to Being an Only Child

Creativity may be sparked by being an "only." 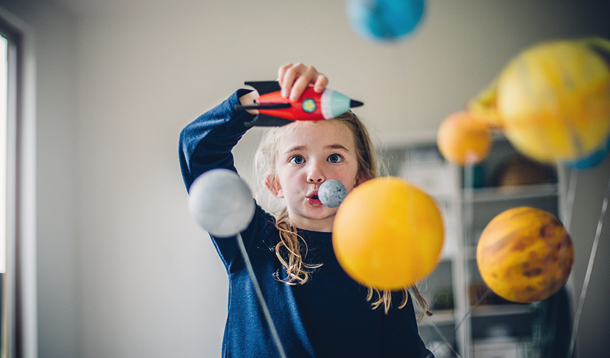 When I was four-years-old, I would return from a long day at daycare and greet my collection of dolls warmly. I’d settle each doll in their proper place on my couch, admiring their neat and orderly row, and enjoy an evening of reading stories to my doll friends, while serving them tea and dessert.

My mom reminisces about this scene often, and how she enjoyed hearing my little voice as I shared about my day with my 'friends.' My mom was a single mother, and I imagine those evenings were exhausting for her, as she quietly prepared dinner, listening to her only child playing peacefully in the next room.

My mother never remarried, and I never had the opportunity to nurture a real live baby brother or sister. Instead, I continued to nurture my dolls, developed my love for reading, and began telling big and creative stories. From a young age I was a dreamer, rarely interested in practical and fact-focused disciplines. I felt deeply, and I explored my feelings, my emotions, and my visions about life and my imagined future - often.

Being an only-child and a 90s latch-key kid meant that I had a lot of time for daydreaming and solitude. I became independent before I reached double digits, but I never lost my childhood wonder or creativity. I spent my childhood and adolescence creating secret worlds that only I knew about, often influenced by the piles of books that I read. My secret stories that often lived inside of me were private, a piece of myself that I didn’t share with anyone.  At fourteen, I would have been embarrassed if anyone knew who deeply I lived in my mind, but those stories fed my soul and my desire for storytelling into adulthood.

It wasn’t until I was a wife and a mother that I began to explore my childhood and its impact on my identity today. After years of therapy, and with many more years to come, I have come to a startling conclusion about my childhood. Being raised as a fairly isolated, only-child has led me to be the creative person that I am today, and in a lot of ways, my years of nurturing my creative spirit as a child as led me into an adulthood full of wonder.

At times in my life I have resented my only-child childhood. As a society, we tend to feel sorry for only -children. We think that their lot is less, and they will be impacted socially and emotionally without a sibling to bond with. I lapped up that perception, believing that my childhood was inferior because I didn’t have a playmate, someone to grow up with, and share my secrets with.

Once I began to refocus my energy and thoughts on all of the creative moments I experienced as a child, I began to shift my perception. Where would I have been without my imaginary worlds? My years of creative play are what fed my soul, and they have contributed to the person I am today.

After doing some research, I discovered that I’m not the only one who enjoyed more creativity thanks to being an only-child. Science tells us that there are many only-children benefiting from their lot in life. According to a 2017 study conducted by Chinese professor Jiang Qiu and a team of researchers, only-children’s brains are different than children who grow up with siblings.

Neuroscience shows significant differences in the brain scans of only-children, particularly related to flexibility, imagination, and planning. Additionally, only-children may be less agreeable, which impacts emotional regulation and social skills. I can definitely confirm all of these findings in my own life.

I’ve spent years resenting my childhood, eager to start my own family overflowing with children. In truth, I did end up having a brood of three lively and loud kids. But now when I reflect on my childhood, I don’t see a lonely little girl who lived in a dream world. I see a young girl who thrived when she was dreaming, whose mind was shaped by her imagination and years of invention and storytelling.

I see a little girl, lining up her dolls in a neat row, believing in her heart that they were really there to listen intently to her day. And I see a tired but happy mother, quietly listening from the kitchen, proud of her little girl.