Let the Kids Have Their Sleepover Fun

Wasn't this some of the best fun we had as kids? 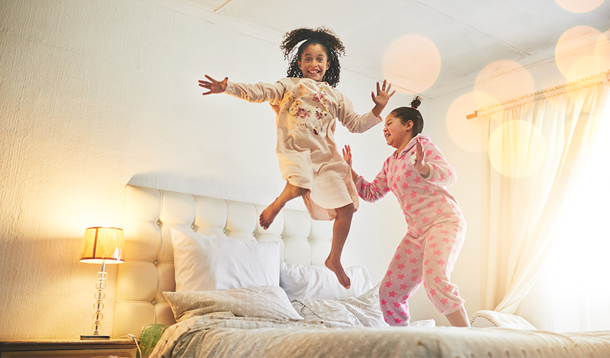 My daughter had five sleepovers this summer. She’s nine-and-a-half. One of the friends she had sleepovers with is my best friend’s daughter. The other is a close friend of hers from dance. We don’t know her parents as well but I know them enough to feel comfortable. They felt the same about us when their daughter slept at our place.

These days, it seems like we’re in the minority. I was pretty shocked to see how many moms in my local moms group said they would never allow their children to sleep over at a friend’s house.

Some of my fondest childhood memories are of sleepovers. That’s when my girlfriends and I would stay up until way past our bedtime, gossiping about classmates and talking about boys we had crushes on. We’d play silly games and eat junk food and watch movies and wake up the next morning closer friends than we were the night before.

I’m not surprised that, in the days of helicopter parenting, where CAS is called if eight-year-olds are alone at the playground enjoying the slides, that parents are more discerning about sleepovers. But to outlaw them entirely?

I get it, the world is filled with terrible people. Little kids get assaulted everyday by adults whom they trust. Having kids stay in other people’s houses is, to many parents, an invitation for their children to be sexually assaulted by a dad or a brother an uncle.

If you’re a sleep-stickler like I am, sleepovers pose a particular nightmare because they will sleep like crap. They will. They will stay up until the wee hours talking and they’ll be basket cases the next day.

There are plenty of reasons to put the kibosh on sleepovers.

But I encourage them. I had a blast listening to my daughter having whispered giggle conversations with her best friend at 1030 at night – hours past their bedtime. It’s a rite of passage. I remember doing that with my close friends at her age. I remember lying on the insanely uncomfortable bedroom floor in a sleeping bag and not caring because I didn’t want to sleep anyway. I just wanted to talk to my friend.

I loved living vicariously though my daughter and knowing she was having an experience with her best friend that she’ll remember when she’s my age.

Concern over over-indulgence and under-rest is fair and it’s inevitable. They will eat like shit and they will sleep like shit.

But, at least in this house, those concerns don’t, in our minds, override the benefits of enjoying one of the more fun parts of childhood, like having the opportunity to spend hours at night enjoying the company of a close friend and waking up with them the next day and getting to have more fun hanging out together.

I will never drop my child off to sleepover at a house where I don’t know the parents. But, if she’s invited to a friend’s house, I’ll go out of my way to meet and get to the know the parents first, so that I can make the call as to whether or not she can sleep there. It will never be a blanket ‘no.’ Because, at the end of the day, sleepovers are one of the things from my childhood that I remember most fondly. I’m glad my parents allowed me the opportunity to have them.