When is it okay to say it's okay to stop? 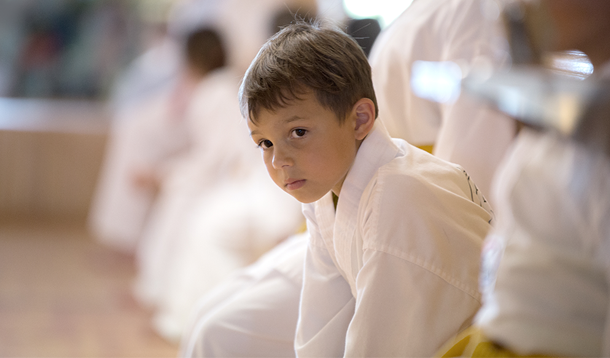 She was so insanely excited that first day. She put on her wee little ballet shoes and her cute little leotard and was giddy like I’ve never seen her before. When it came time for the class to start, she refused to go in. She cried and cried and cried. The amazing teachers tried to convince her to give the class a chance and she eventually went into the room and sat in the corner, watching, silently crying, for the entire half hour.

It was gut wrenching.

Rinse repeat the following week and the week after that. At one point she joined the warm up for about 45 seconds. Then she got nervous and went back to her corner.

Her dad and I started to talk about just cutting our losses and withdrawing her. We were so torn. We knew she wanted to do it. We knew her fears and her shyness was what was holding her back. So, with the blessing of her teachers, we kept her in.

At the six-week mark, she tried the warm up. Two weeks later she was participating fully. Her dad (who NEVER cries) and I watched her recital through tears – as this super shy kid who we almost withdrew, got up on stage in front of 500 people and danced her cute little heart out. Seven years later, she is still dancing and loving every second of it.

I guess that’s why, when she came to us the other week, now nine-and-a-half, and told us she wanted to quit Taekwondo, we had a big talk about why. If it’s because she found it too challenging, we’d want her to persevere. The benefits of martial arts, ESPECIALLY for girls, are so incredibly great. “I’m just over it,” she told us.

We picked taekwondo for her three years ago. We did it for a number of reasons, but the greatest benefit we saw was in her self confidence. In our dream world, she becomes a black belt and kicks the ass of anyone who dares to hurt her.

But she’s over it, and that’s fair. At nine-and-a-half, she’s really old enough to make that call for herself, and as her parents, we will support it in spite of the fact that we’d prefer for her to continue. Yes, it will save us money to withdraw her, and the two nights a week of training was a lot in conjunction with dance and swimming. It was worth it to us. It’s not to her, and it’s her time and her energy that is being spent. So, no more taekwondo.

As our kids grow and change, it’s weird, as a parent, to step back from the vehicle we were so happy to drive and let our kids take the wheel to go in the direction that they’d prefer.

I’m glad that, seven years ago, we insisted she not let her fear get in the way of doing something we knew she loved. And now, seven years later, we as parents are confident that if it’s not something she loves, it’s okay to walk away. It’s not quitting. It’s moving on, as kids do, as they discover their true passions. It was harder on us to let go of what we wanted than it was to allow her to feel empowered to make this decision for herself.

We can help, we can guide, we can provide opportunities to explore talents and interests. At the end of the day though, letting them let go of our dream is really the first step in us realizing that we’ve given them map, but it’s really up to them to decide where they want to go.