To All the Moms of Nine Year-Old Daughters, Myself Included: I Am Not Ready

Can we freeze time? 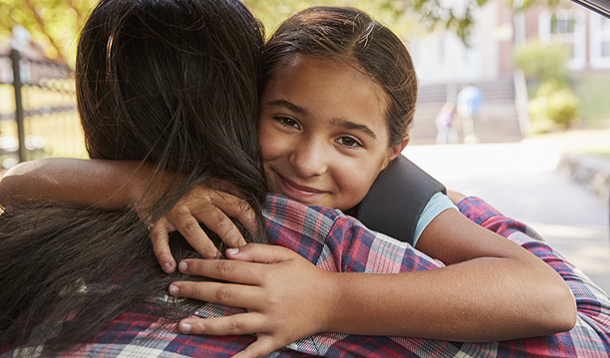 The reality is, she’ll roll her eyes and ignore me. She wants freedom. She wants independence. She wants to hit puberty like my seven-year-old son wants all of the Pokemon cards – now!

I find myself holding back and answering her questions as they arise and giving her a heads up about some changes she will start to notice in her body. I am very open with her about those things. But, at the same time, I want to warn her about things beyond physical changes that she’ll have to deal with and she makes her way into her teen years.

I want to tell her that teenagers can be real assholes. That they will pick apart the body she has, no matter its size. They will call her names and they will make her feel like shit.

Teenage fights are the fucking worst. You get into it with your best friend and you’re shunned by the friends who take the other person's side. That’s how girls fight. They fight mean. They fight with words. They tear you down when you at your most vulnerable. Not that it doesn't happen now. It does. But there aren't cell phones and social media involved yet. She 'aint seen nothing yet, and I know it.

I want to tell her she’ll have to stick up for herself far more than is fair. That being little is a license for forgiveness (she’s just a kid) but that expectations are higher when you’re older and that sometimes they’re fair, but often, they’re not.

I want to tell her she’s going to get pressured into doing things she doesn’t want to do and that I will have her back every time she is honest with me when she falters. She will test her own boundaries of morality as she grows and figures out who she is, and there is one hell of a learning curve to get there.

I want to tell her all of these things. But right now, I will tell her nothing of it. I reinforce good choices and discuss poor ones. I do what I can to instill confidence and pride in her. But I am loving her still living in a fluffy world where average nine-year-old crap is mostly manageable – when just listening to me is enough to soothe a hurt.

I won’t always be that person for her. At some point, she will turn to her friends before she turns to me, and I will no longer the one who will soothe her hurt. I am building her up to choose friends who will help guide her in similar ways to how I would, if I had the chance.

Maybe the talk I need to have is with myself. Maybe the bubble I’m enjoying my daughter living in is more my bubble than hers. We have crap we need to deal with but I know nine-year-old crap has got nothing on what I’ll deal with when I’m dealing with teenagers. So I’m enjoying the calm before the storm – for her and for me.

I’m not ready for either of us to face the teen years. She’s in a race to grow up. I’m in a race against time.

So, daughter, as you approach a period of time you can’t wait to reach, hear this: Nine is pretty awesome. There will be plenty to enjoy as you grow and spread your wings. But enjoy this lull, when you’re still a kid. Being a kid is pretty cool. There’s plenty of time to be big. Enjoy being small, while you still are, just a little while longer.