Taming the Beast: When Anxiety Attacks Hit in Childhood

His declaration that he was dying threw me into a panic. 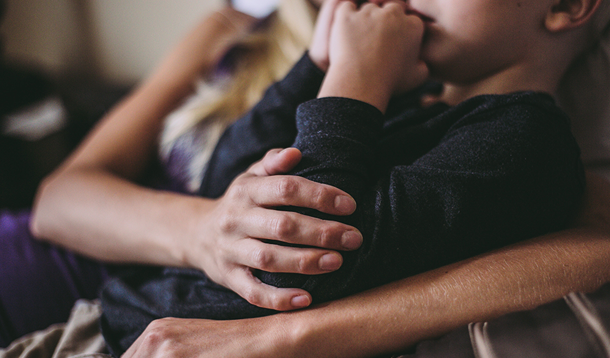 The panicked pleas from my five-year-old jarred me to my core. He screamed the words through tears, desperately seeking help.

I tried to assess what was wrong. He said he couldn’t breathe, but he seemed to be taking in air. He wasn’t having a heart attack. I didn’t even know he knew the word. His declaration that he was dying threw me into a panic. I knew it wasn’t true, but it was unbearable to hear him say it.

Finally it dawned on me – he was having an anxiety attack. I’m no stranger to these attacks myself, and certainly not to anxiety in general, but I never expected to see it in my kindergartner.

I convinced him to hug me as I tried to slow his breathing. “In, out, in, out.” I repeated the same words my husband had chanted to calm me while I was in labour with my children. His breathing eventually started to match my rhythm and he began to return to himself.

It had been scary – for both of us – but it was over. I looked back on the weeks before for clues. There was one night he had awoken screaming for help. We had assumed he’d had a nightmare, or had woken up and been scared of the dark; but now I wondered if that had been his first anxiety attack.

Tantrums are a common occurrence for this kid. There was no such thing as terrible twos for him, he’s always been, well - terrible. Since he was an infant, intense crying has been his go-to for any infraction, no matter how minor.

Even at five, he loses it on the regular. I’ve become astute at ascertaining whether he is having a true tantrum, for which he is reprimanded or ignored, or if he has reached the point that he is beyond it and needs help to reign himself in. Hugs and talking generally work, and whether a true tantrum or an emotional overload, once calm, we talk about whatever had set him off and how he could have handled it instead.

But this was different. My suspicions of an anxiety attack were confirmed a few weeks later. It started out typically – I told him to get dressed for bed, he fooled around instead, I got annoyed, he got annoyed, I yelled, he sailed into a tantrum. He continued his tantrum through getting ready for bed and even once under the covers. I refused to budge.

Then it changed. I recognized the familiar transition from tantrum to emotional meltdown and offered him a hug and help to calm down. Atypically, the hug didn’t work to calm him, and I felt his breathing quicken. It was starting again. Soon, he was begging through gasps, “Help me! I can’t breathe! Help me!” He could barely speak, his breathing was so fast, and all thoughts of a tantrum dissipated. I didn’t care about getting him into bed, I was no longer angry with him – I was desperate to help my child.

“In, out” didn’t work. Well-meaning reassurance that he was having an anxiety attack made things worse. He focused on the word “attack,” and attacks were very serious. I tried to explain to him that anxiety attacks weren’t like the attacks he was imagining; they were scary but not dangerous, like watching a scary movie. I noted that if these were going to become a regular part of our lives, we would need a new, less-threatening name for them.

I continued to hug him, and give out a long, repeated “Oooooookaaaaaaaay…” I rocked him. I resorted to what had helped when he was a colicky baby, and I shushed him, right in his ear. Eventually, he calmed enough to ask for a nose wipe. I seized the opportunity to make a joke, which was either going to help or start him up again. It’s always a crap shoot whether he will laugh or be offended, thinking I am not taking him seriously.

This time he laughed. He laughed so hard that I laughed too, and we sat there laughing hard, belly laughs for at least a minute. We both sighed with relief. The attack was over, but we still sat there, embraced. Anxiety attacks are different than tantrums; you can’t just bounce back after it’s done.

When he finally drifted off, I stayed sitting beside his bed for a while, watching my sweet boy. No child deserves to feel the torture of anxiety, not even ones who frequently give their mothers a hard time. The guilt of having passed my own anxiety down to him weighed on me. I had hoped to spare my children from this affliction, but genetics had proved too strong.

I worry what this will mean for him as he grows older, and his triggers become bigger than going to bed before he is ready. I know he has a long road ahead of him. I know this, because I am many miles ahead of him on the same road. I can only hope that my familiarity with it will help me guide him through it. Maybe it will be easier for him having us navigate it together.

We have appointments booked with professionals to get him the help he needs. I know we can’t do this alone. In the meantime, we will work on strategies to manage his anxiety, before and during attacks.

What I’ve learned from all this, and what I hope I can impart to other parents, is that you need to know your child. It’s about understanding that sometimes a tantrum is more than a tantrum, and acknowledging the difference. It is okay to help them regain composure without giving in. If they reach that threshold, help them calm down, then deal with the problem. This doesn’t reinforce the tantrum, or give in to their demands. It shows them that you are there for them when they need you, even when you’re angry. We can all use some reassurance when we’re upset.

This is not the legacy I hoped to pass down to my son. I’d rather he have gotten my ability to sew, or even my sarcastic wit, but this is what he’s stuck with. All we can do is be there for him and continuously assure him he is going to be okay.