I Had to Decide to End the "Magic" for my Son

The older he gets, the more important it is for us to be able to trust one another and to be open with each other. 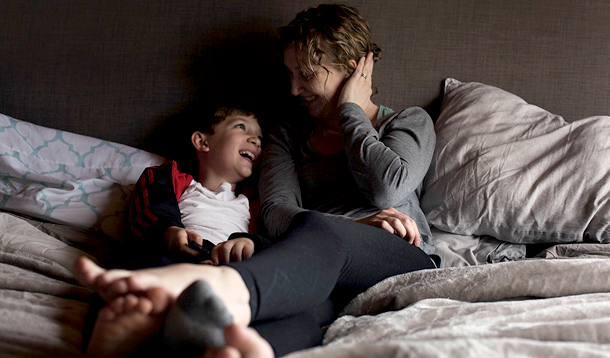 Our Elf on the Shelf has a full-time gig. He used to go back and forth to the North Pole, but one Christmas about three years ago, he came and never went home. I tell you this to let you in on how hardcore we are about holiday magic.

We do it all. Santa, Elf, Easter Bunny, Tooth Fairy, all of it. My son and the Elf became best buddies and pen pals. They even have a notebook dedicated to their correspondence. He’s missing his hat and is filthy from being handled so often (we are rule-breakers) but he is well-loved.

And that’s why making the decision to burst this magical bubble for our son was so hard to make.

He’s 10, and we knew if he wasn’t suspicious yet, he would be soon. The original plan was to wait until he came and asked us, and then we would answer him honestly; but he hasn’t asked. The older he gets, the more important it is for us to be able to trust one another and to be open with each other. We were worried that now that he is older, if we waited for him to ask, he would wonder what else we were keeping from him and doubt our honesty.

I know there are parents out there who tell the truth about Santa and the rest right from the beginning to avoid a similar pitfall. I’m emphatically not one of them. I do not believe that doing holiday magic with kids is that same as flat out lying to them about other things. But I can see how in the mind of a 10-year-old, finding out your parents have lied about all this and admitting it only when you catch them in the lie, it might cause some trust issues.

So, we decided to tell him. I sat him down on our bed, I told him I had something important to tell him, and that I was telling him because I thought he was old enough and mature enough to handle it. And then I just came right out with it. None of them are real.

He was quiet for a moment, and then some tears fell. I assured him it is the only thing we have or would lie to him about, and that I was telling him the truth so that he could trust me on that. I explained that we had let him believe they were real because it’s a magical part of childhood and that we knew he would cherish the memories long after he knew the truth. Once he had taken some time to process what he had just learned, I asked him if he thought we had made the right decision, and he told us we had, and that even though he was sad now, he was glad we had let him believe.

I admit I was relieved to hear this. I worried he would be resentful and angry, and I told him it was okay if he was mad at me; but he handled it with a quiet grace and maturity. He handled it far better than I had when I learned the news at his age.

I told him the story of my own holiday awakening. I wrote a scathing letter to my mother, making sure to emphasize that it was her and not the Tooth Fairy with whom I had been pen pals, like my son was with his Elf. I tore a strip off her, demanded my teeth back, and essentially told her to go fuck herself. It’s a source of great amusement to both of us now (we still have the letter!) but at the time, I was devastated.

My son had no such reaction. He laughed at the absurdity of my story.  It didn’t take him long to let it all sink in and regain his composure, looking just a little older than he had moments before. That’s when I let him in on the big secret: First, you believe the magic. Then, you are the magic.

He has a five-year-old brother.  And now, he gets to help be Santa, and the Tooth Fairy, and the Easter Bunny for the next five years, until it’s time to let his brother in on the secret too. This excited him greatly. (And he learned very quickly the following week, when he helped hide Easter eggs, that there are some perks to this. The Easter Bunny gets to eat the extra chocolate.)

One of the first things he did with his new power was head into the room where his brother was sleeping, get his brother’s Elf correspondence notebook, and write him a letter on behalf of his Elf.

We discussed the importance of never ruining the magic for someone else. His brother still believes and so do many other kids, and it isn’t up to him to take that away. He has stayed true to his word as his brother and classmates discuss the holiday guardians. “Look, the bunny hid eggs in here!” he says to his brother, flashing me a sly wink. He enjoys being in on it.

I’m awed by his response to all of it. Make no mistake, finding out these characters are not real is a loss for children, and there is grieving. I expected anger and backlash, and I would have understood if he had lashed out. But he didn’t. He let himself feel the loss, he took his time processing his new view of the world, he asked some questions like would I still hide his eggs and buy him presents from Santa (of course! Money for loose teeth too.) And then he simply accepted it and moved into his role of being the magic.

He was ready. We were ready. Time to make some different, but just as wonderful, memories.

RELATED: Is The Big Santa Con Hurting Our Kids?