some competition and rivalry is totally normal.... up to an incredibly-hazy-and-impossibly-unclear point 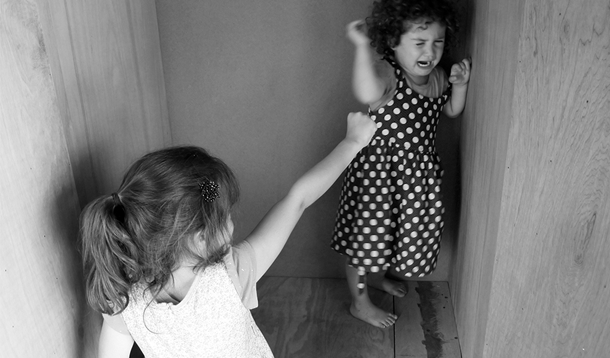 I don't really get most of the National and International "Days" out there. I do, however, get National Siblings Day, because about 80% of North Americans have at least one sibling.

When you think back on growing up with your sibling(s), you probably remember lots of laughing, secret languages and games, pranking your parents together, sitting in punishment together. And you probably remember some stellar fights - some shallow and stupid, others deeper and more meaningful. I remember one I had with my brother over the remote control for the TV (what else?). He'd stolen it, I yanked the cable out from behind the TV. He picked up a nearby mug and bounced it off my head, I whipped him back with the suddenly-handy cable I'd misappropriated.

We all fight with our siblings growing up, and some competition and rivalry is totally normal.... up to an incredibly-hazy-and-impossibly-unclear point. So how and when does normal, healthy sibling rivalry cross over to something much more sinister?

Siblings (and the relationships we have with them) play a major role in shaping our personality development. In fact, recent research in attachment and bonding shows that our siblings play as important a role as our parents. Studies also show that a full 50% of children report having been bullied by a sibling. This is higher than the incidence of both marital abuse and even parent-child abuse. It may - or may not - surprise you to know that sibling bullying is the most prevalent form of family violence. What exactly is bullying? Is it fighting over the remote control? Is it calling your sister a poo-poo face? Is it shoving your brother at the dinner table?

The definition of bullying is victimizing someone through severe and repeated negative actions, with the deliberate intention to hurt or cause harm. Negative actions can be physical or emotional. They can involve beating/shoving/punching - even viciously tickling - your sibling, calling them nasty names, spreading rumors about them, and turning other children against them. The key things are that the actions cause the victim pain and are repetitive.

As good teachers, we take a hard stance on bullying in school. As good parents, we spend oodles of energy trying to establish healthy sibling interactions. But the reality is, too many parents - along with educators and healthcare providers - are dismissive of sibling aggression, calling it "kids just being kids." So how are sibling bullies made?

There are some personality characteristics more inherent people who bully others period, such as high Neuroticism/Psychoticism combined with low Agreeableness and Conscientiousness. But there are certain family dynamics that make it far more likely that one child bullies another child in the home. Some of the most compelling ones include parental neglect, parental favoritism, ineffective parental conflict resolution, obscure/confusing/inappropriate family boundaries, marital conflict, marital abuse, parent-child abuse, and lack of emotional/mental fitness in caregivers. Over-promoting friendliness between siblings (i.e. "You have to be nice to each other all the time, and be the best of friends") and lumping them together too often (i.e. "You kids this" and "you kids that") also increase the chances of sibling bullying, because they interfere with the natural process of de-identifying oneself from ones sibling/s, in order to establish a separate and unique identify - a crucial factor in healthy personal development.

Sadly, the downsides in adulthood of being bullied by a sibling are very real. Depending on the severity and length of the bullying, they range from mild depression/anxiety to substance abuse and even full on post-traumatic stress disorder. In some cases, the ability to form trusting and lasting relationships with others as an adult is never developed. Case in point, an overwhelming number severe sibling bullying victims never marry, according to research.

As a therapist, I have seen dozens of adult clients who have painfully described heartbreaking childhoods that involved being bullied a sibling. They are often hesitant to recognize it as such, for the very same reason parents, teachers, and clinicians often do not - it's written off as "typical and normal."

If you have a loving and healthy relationship with a sibling, take this day to consider you (and your sibling) lucky, for there's something truly remarkable about someone who has known you for basically your entire life. If you don't have a great relationship with your siblings, don't sweat it. There's no prerequisite that you be uber-close with them - you are what you are.

And if you experience sibling bullying, or think you may have, take heart. You are not crazy, and you are certainly not alone. Set limits for yourself and make sure you live your life within them. Sometimes, this means severing ties with a sibling who is simply too difficult to have in your life. If that's what you need to do, know that it's ok. Blood is not always thicker than water.