Upstairs Time - The Best Idea Ever

I wish we did it earlier. 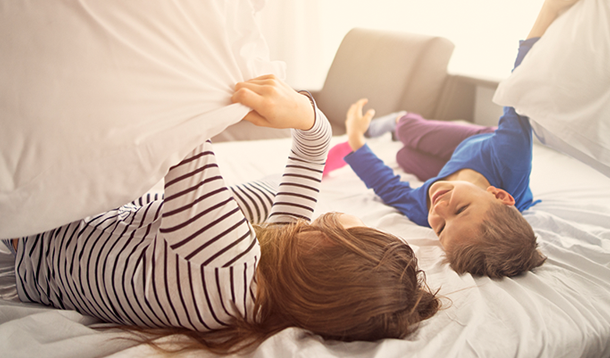 My husband and I love and value our prime time, not because we like to watch our shows (though, we do) but because that is our opportunity to connect as a couple, talk about our days and have child-free time before bed. When we decided to move our children’s bedtime a bit later, we also decided to try something new.

That’s when we decided to implement “Upstairs Time,” or, what I commonly refer to as “The best idea ever!”

Every night, a half hour before bed, upstairs go my six and nine-year-old. They can do whatever they want, but it can’t include screens. They can read. They can play together, we don’t care. But it can’t involve us.

We implemented upstairs time almost a year ago, it’s had implications we didn’t intend and it made us wish we did it earlier. The kids have been forced to play together! Neither child is much of a loner and they’d rather play together than alone most of the time.

Don’t get me wrong, they’re siblings, so they fight at least once during that half hour. Sometimes the half hour ends early because of some ridiculous fight (you know the kind. Nine-year-old finds random stick from old game. Six-year-old says useless random stick is his. Nine-year-old says it’s hers. Trigger, all hell breaking loose), but most nights it’s an opportunity for them to actually play with the toys that litter their floors; a chance to use their imaginations and make up games; an opportunity for them to find common ground as siblings to play and enjoy each other’s company.

Upstairs time is more than just screen-free time and give-mom-and-dad-a-break time. It’s turned out to be sibling time and imagination time. I know we should limit screen time more than we do, in general. I know that, given the opportunity, children can find ways to entertain themselves. But I, like many many other families I know, enjoy vegging on the couch, snuggling with my kids watching TV. Life is busy and hectic and exhausting and sometimes (most times!) it’s just easier to take the work out of relaxing from the day.

It turns out though, that upstairs time has turned into a gift we’ve given to our children and to ourselves. Our parents didn’t entertain us when we were kids. We would spend hours in our room making up games and building things and playing with and, yes, fighting with our siblings. It may only be a half hour, but for the last few minutes of our family’s day, our children go upstairs and either play together or read under their loft beds. What they’re not doing, however, is having a screen, or relaying on my exhausted husband and I, to entertain them. And that is a gift to us all.

RELATED: 10 Easy and Calm Activities to Adopt Into Family Rituals and Rhythm