I've Missed My Calling as a Referee

How did we get to the place where I sort of understand why the characters in The Parent Trap each took a kid and raised them on different continents? 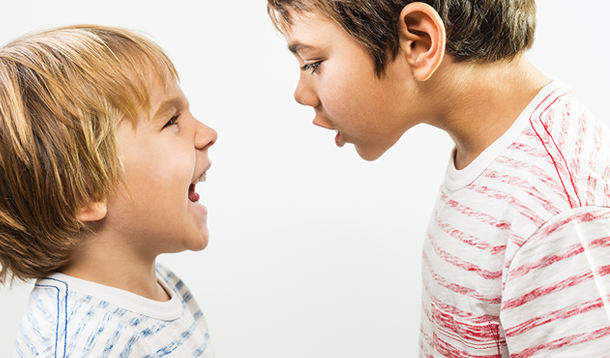 I missed my professional calling. It seems that my particular skill set is best suited for refereeing, because that is what I do All. The. Damn. Time.

There is just under a five year age gap between my kids, and it is nice. Don’t especially feel like making breakfast? The 10-year-old has the five-year-old covered. Two kids in diapers? Not me! Oldest one in school when the second one is born, check. I planned this well.

And at the beginning, I was so smug. My oldest son had no jealousy of the new baby at all. There was none of the acting out I saw so much of as a preschool teacher. He didn’t mind the loss of attention, despite having had us to himself for five years. He was okay with the crying, and content to amuse himself while we tended to the baby’s needs. He begged to hold the newborn while I ate my lunch, I mean, come on, this was some kind of sibling Utopia.

This lasted for two full years. I looked at other parents who were constantly dealing with rivalry with quiet pity, and a slight, “Sucks to be you, my kids get along great.”

So how did we get here? How did we get to the place where I sort of understand why the characters in The Parent Trap each took a kid and raised them on different continents?

I no longer set an alarm clock, there’s no need. The fighting will wake me long before my alarm would. Screaming Kindergartner should be a preloaded ring tone on all phones, no one sleeps through that.

What could they possibly be fighting about at dawn? Well, the most popular reason is the belief the other is trying to see them naked. In the year since they started sharing a room, neither of them has figured out how easy it is to grab their clothes and change in the bathroom without a daily reminder. Also, neither of you has any interest in seeing each other’s business. No one does. This screaming is unnecessary.

The arguing continues throughout the day. Someone takes a toy, someone threw something and it hit the other, something got drawn on somehow. A name was called, a possession was broken, something was had first. I don’t really pay attention to the specifics at this point. It’s never about the specifics anyway. It is a play for dominance between two boys who are five years apart and cannot possibly compete on a level playing field. I did not plan this well.

The tantrums while playing together are second only to the ones thrown when they are forced to separate. It amazes me how someone can be so upset about being asked to move away from the person they had five minutes earlier screamed they hated for throwing a toy at their head. They can’t play together, but they can’t bear to play apart.

But I suppose there is a reason for that. They love each other enough to fight. I know that’s a paradox, and also inappropriate. I condemn the fighting, and in no way shape or form will I allow them to think it is okay to hurt anyone, even the ones you love. Fighting is not an acceptable way to show you love someone. But at this age, it makes sense.

They are trying to work out how to resolve conflicts and express big emotions, like anger and frustration, they have with other people. They fight so passionately and freely because they feel safe with each other. They know they can scream at each other and remain loved by the other when the emotions pass. They have no such security with friends or classmates.

And the vulnerable emotions they share with each other are not always volatile.  Last week my five-year-old refused to wear a shirt that said “World’s Best Brother” because the best brother in the world was his.

Yesterday, when I called them for dinner, they appeared downstairs in full ninja gear. They had been meditating. Something had happened to make my younger son angry and upset, and my older son had shown him how to calm his anger through meditation.

There are love notes between them, another vulnerability they would be unlikely to express so freely with classmates. There is mentoring and encouragement. There is celebration for the other’s accomplishments. The love and admiration are there.

So instead of looking at the fighting as a hopeless sign of animosity, meant to make me prematurely grey, I’ve started seeing it as two kids who feel comfortable enough with each other to share their raw feelings, and who are trying to navigate conflict management.

The fighting part is wrong. We’re working on better ways to express those big emotions and resolve issues. But I’m looking for the love too.