The move has been brought on by consumer feedback. 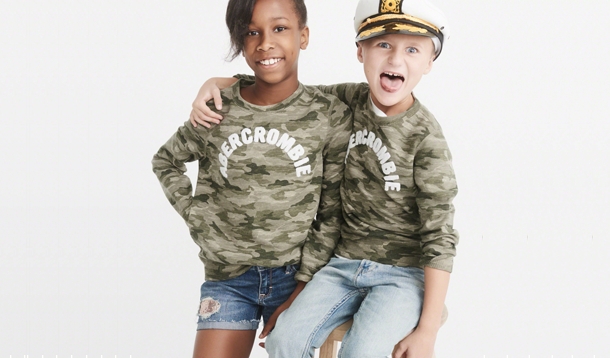 Choosing to be on the right side of history, Abercrombie Kids has released a line of gender neutral clothing. “Finally!” shouts many of us parents who have been fighting for this for years.

The move, apparently brought on by consumer feedback, is a step forward in eliminating the subtle gender-conformity messages children begin receiving at birth. Before they even know they exist as an entity apart from their mothers, children are bombarded with clues as to what they should wear and how they should act based on what is between their legs.

It’s silly when it comes down to it, most of us would agree, but it’s so subtle we don’t even realize we are doing it. As part of a documentary for the BBC, volunteers played with babies “Oliver” and “Sophie” while being offered a variety of toys to play with. Interestingly, the volunteers tended to give baby Sophie toys typically associated with girls, and Oliver ones that were typical for boys. One volunteer actually switched the robot toy in Sophie’s hand for a more “girly” toy.

But “Sophie” was a baby boy named Edward. And “Oliver” was a little girl named Marnie. They had been dressed in clothing aimed at the opposite genders. The volunteers were by and large shocked that they had stereotyped the children. Many considered themselves to be very pro-gender-neutral stance, but had subconsciously treated the children differently anyway.

The same documentary explored a classroom that had taken a gender-neutral approach to teaching, including gender neutral clothing, toys, washrooms, and ensuring all the students are approached the same regardless of gender. The results after just six weeks were amazing. The girls gained self-confidence, while the boys exhibited more caring behaviour and expression of emotions. Undesirable behaviour decreased by 57 per cent.

The messages seem so subtle they couldn’t possibly have such an impact, but they do. They add up. “Boy toys” tend to encourage participation in STEM activities and careers, where women are underrepresented, while it’s less common to see men in caregiving roles such as early childhood education and nursing.

But clothing shouldn’t matter, should it? It does. When I tried to find a shirt aimed at boys with a strong female character or message on it, I failed. Female characters are even removed from group shots on many boys clothing, with The Avengers and Paw Patrol being two of the biggest offenders.

The messages put on girls clothing frequently sends a different message than that of the ones for boys. When my five-year-old was a baby, I was shocked to spot two onesies at Target with such polarizing messages. The boys’ onesie said, “Future Man of Steel.” The girls one said, “I only date superheroes.”

In fact, it can be difficult to find girls clothing without a message or cutesy design on it at all. My sister lamented recently that it had been nearly impossible for her find a plain shirt for her daughter.

The argument that there is nothing to stop boys from wearing clothes from across the aisle and vice versa is valid. I have certainly dressed my sons in clothing from the girls’ section. My niece rocks her big brother’s hand-me-downs. My kids, and many others, have always been encouraged to choose the clothes they like from anywhere in the store.

But the label matters. They are still aware that they are choosing clothes from the “wrong” section, and that is another subtle form of pigeon holing. In that vein, Abercombie’s elimination of labels is revolutionary. Categorizing by style and size rather than gender takes away the message to kids about what they “should” choose, even if they can choose anything.

What’s more, the gender-neutral line isn’t a wall of grey, beige, and yellow. It includes clothes that are pink, and camo, and clothing that could easily be labelled as boys or girls clothing, but isn’t. Instead, it is specifically labelled gender neutral and modeled by both boys and girls, and that sends a different subtle but powerful message.

Hopefully other clothing companies will follow suit and eliminate the gender categories. Teaching our kids that it’s okay to wear boy clothes if they are a girl and vice versa is a great start to changing our thinking, and we have made a lot of progress in this area. Now it’s time to teach them that there’s no such thing as boys or girls clothing, and put our money where our mouth is.

RELATED: Pick One of These Gender Neutral Baby Names and You'll Be All Set