Your Kid Doesn't Need to Be Good at Everything

When we focus on the grade instead of the outcome, we're making it all about us. 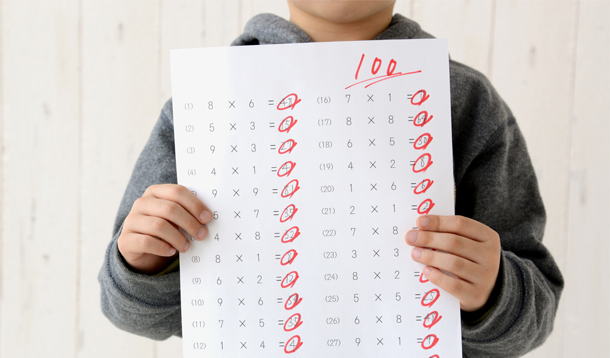 Read a novel and summarize it? I’m your gal. Make up a bedtime story on the spot? I’ve got your back. Edit an article? Boo-yah!

Words are my friends and crossword puzzles my nerdy pastime. But math? That sh*t makes me break out in hives.

I’ve always had a hate-on for math. From an early age my brain could never comprehend what it needed to comprehend no matter how many hours I studied. I love the freedom and flow writing gives me. Math is all about rules. Geometry gives me nightmares.

My younger son is the same with French. No matter how hard he tries, he just doesn’t get it, nor does he like it.

He doesn’t need to be génial* at French. After his last report card with a less than stellar French mark, I gave him the ‘bear with it’ talk which consisted of me telling him he needs to suck it up, hand in his best work for the next two years, and then he never has to speak French again.

This doesn’t mean he can slack off; he still has put in the effort, but at the end of the day, it’s totally cool he’s not ever going to speak French.

Our kids don’t have to be great at everything.

It’s something I’ve seen over the years at both school and in extra-curricular activities. Somehow our society has become obsessed with having our kids be the best at everything. It’s not good enough to just play house league soccer or hockey once or twice a week. Kids are now specializing in sports at a young age with extra practices, individual coaching, expensive equipment, and summer camps.

And getting a B or a C in school? What the actual f*ck, Bobby.

When I was in elementary school I brought home a report card with a C+ in Math and an A+ in English.

What do you think happened? My parents wanted me to bring up my math mark. I didn’t need to work on my English because I was already excelling in that subject.

For the longest time this was my inclination with my children as well. Bring up all the marks. A’s across the board. Or at the very least, a B+.

Because, if I’m being totally honest here, seeing all A’s on a report card made me feel good as a parent. It somehow validated that I was doing a good job. Basically, it was all about me.

But I’ve realized it’s not the grade on a report card, or winning first place in a race or tournament that matters. It’s the hard work and effort they put in to get to get there.

The bare balls truth is we all have weaknesses. Mine include math, parallel parking, public speaking, returning Tupperware to my friends (seriously, if you forget to take it with you, it’s now mine forever) and wrapping presents. It’s unrealistic to expect anyone, let alone a child, to be good at everything they do. Our strengths and weaknesses make us unique.

Instead of giving the squint eye to that C in math, why not look at your child and say, “Wow, he really has a capacity for Art and English so let’s cultivate that talent.”

Put our focus on the effort and not the outcome.

*Yes, I totally had to google how to say great in French.

RELATED: Yes, I Pay My Kids For Good Grades