Our Kids Shouldn't Be Sitting in Class 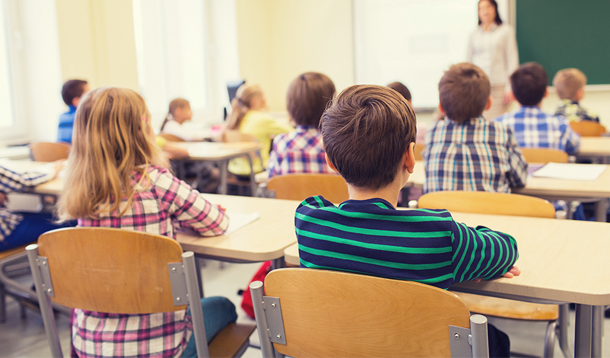 How many hours do you sit a day?

When I had an office job, the answer was, on average, about 8 to 11 hours. I’d sit at my desk to work, I’d sit at the table for lunch, I’d sit during conference calls, I’d sit in my van while I ran errands, and then in the evening, I would sit to watch television or read.

Getting in 10,000 steps a day was difficult. I was a prisoner to my chair.

Eventually I switched my office chair for an exercise ball, which helped in many ways. The back pain I used to experience went away, and I slouched less. During conference calls, I would bounce. This once ended disastrously (with the other call participants asking if I needed help), but other than that, it was good.

What’s even scarier is that our kids are a part of this problem now as well. They sit in school all day, gym classes are getting shorter, then they come home and play video games, watch YouTube, Snapchat with their friends, or just hang out. For the most part, these activities are done sitting down.

They are growing up in a sedentary world, and it’s not only affecting their health but also their attention spans.

In 2014, a school in California agreed to replace regular desks with standing desks for one fourth grade classroom. What the teachers and parents found was that the kids were more focused and overall academic performance improved.

A principal in Auckland got rid of recess rules and allowed the kids to participate in any kind of active play they wanted, including climbing trees, riding skateboards, and playing with wood, tires, and an old fire hose (yes, you read that right). At the end of the year, there was a reduction in bullying and an increase in concentration levels.

None of that surprises me, because I’ve seen first hand what happens when a teacher takes the initiative to keep her kids active in class. Two years ago, my younger son’s teacher replaced all the chairs in the class with exercise balls. She used her own money and spent what I can only imagine was a very long time blowing them all up.

When my son told me on the first day, I was secretly ECSTATIC but also curious. Would the kids take advantage and start bouncing around the classroom?

The answer is no. It took about two weeks for the kids to settle in and then it was business as usual.

When I asked my son about his experience with the balls, this is what he had to say: “I felt like it took a lot of stress off everyone. It made it easier to focus on work and not get distracted. You could just bounce when something was stressing you out. If I was having a problem on a test, bouncing would help me think of the answer. “

This is especially true for boys. Years ago I read a book called “The Minds of Boys: Saving Our Sons From Falling Behind in School and in Life” by Michael Gurian and Kathy Stevens.

It opened my eyes to how boys learn differently than girls. It should come as no surprise to multi-tasking moms that girls are better at switching from one subject to another, while boys are typically better at working on one topic to completion.

But what really stuck with me was how boys will learn and listen better if they can move around and fidget while it’s taking place.

If you let your son sit on the floor and play with Legos while you read to him, he’s more likely to retain the information than if you sat on the couch with him and read.

In a perfect world our kids would get more recess and gym time to coincide with their learning throughout the day, but as academic competition becomes more demanding, I have a feeling those times will be getting shorter, not longer.

For the record, I don’t agree with this at all. We need to focus on raising well-rounded kids, not simply on grades and standardized testing. While it’s up to us to ensure our kids are active at home, we should all be trying to get our schools on board with things like standing desks and exercise balls.

Every little bit helps. Because sitting still isn’t only killing us, it’s killing our kids as well.

RELATED: Daily Exercise is Essential for Happiness and Balance