When I had my first child, a daughter, I was hell-bent on making her a feminist too. 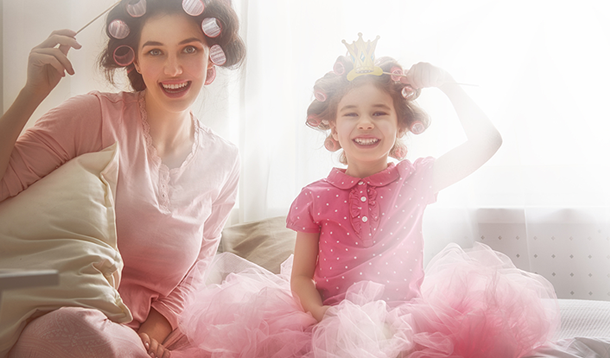 I was all sick and snotty, tucked under my duvet, when I started reading a post about Halloween costumes and gender. It was funny and thought provoking. It also sealed the deal: I will be a sexy Sponge Bob this year... if not Patrick.

What I loved about the post is the permission it gave me to stop beating myself up over pink and Barbie time, while still calling myself a feminist. I have struggled with this issue for years.

A long time ago (before children), I was trained to be a counselor for women, learning the ways of patriarchy and misogyny. I loved every minute of being surrounded by feminists, and I wanted to be one.

I was a young twenty something who was going to make big changes. And I did, in myself mostly. My girly-girl was silenced because I wanted to fit in. I felt like I had to be a certain way to be good enough.

I don’t blame the women I was with. They were strong-minded and happy to own their opinion. My problem was I had no idea how to do that. There was no balance, and I didn’t know you could be your own version of a feminist.

When I got engaged, one of my mentors seemed disappointed. Her face said it all. I had let the team down. I had surrendered to oppression and was going to the dark side (or maybe she had been married before). Hard to say, but there would be a struggle with my wants and the desire to be the best feminist I thought I had to be.

When I had my first child, a daughter, I was hell-bent on making her a feminist too. She wouldn’t see pink, because I wouldn’t accept it as a gift. People knew not to bother. She was not going to be playing with Barbie, pretend vacuums, or fake make-up.

I was projecting, big time.

And then it happened. My Bob the Builder-loving, two-year-old went to her first girly party. She came home with a grab bag vomiting sparkles, fairies, and oppression. This one party fueled her fierce desire to dress and play like a pink, glitter-bug prancing girlie girl.

I was horrified. I worked too hard for this. I grabbed the train set, pin striped overalls and my moustache. She took banned glitter glue from a purse she hid under her bed and smacked a tiara on my head.

I had to let go a little. She could dress up like a princess, but she would be referred to as” Queen,” for that’s who reigns. Nice try. She was strong-willed and buttering Granny up for Barbies and Disney Princess swag a week into her transition from my ideal to her self.

I am so happy she refused to back down. She found ways around my agenda and let her desire shine. This allowed me to bring back my inner girly girl who had been snuffed out.

We wore pink, and lots of glitter. We were so happy playing dress up and Barbies. I still do. She, however, at nine has started wearing blue, purple, and black. Cause they are just colours to her. Her Halloween costume this year is Hermione from Harry Potter because she wants to cast spells.

I’m not sure if she let go of pink because it was a phase done or if she simply saw the rest of the rainbow as hers to explore. Either way, my inner Cinderella thanks her for the rescue.

Previously published at Detached From Logic.

RELATED: The Stylish Clothing Store That Will Empower Your Tweens

Besides being a funny, talented, beautiful, award winning (pending) blogger, Angila is seriously for real a Freelance Writer. You can see her grown up, mature, not funny but fabulous side here at angilapeters.com.