“THESE ARE GREATEST SCHOOL PHOTOS, EVER!” 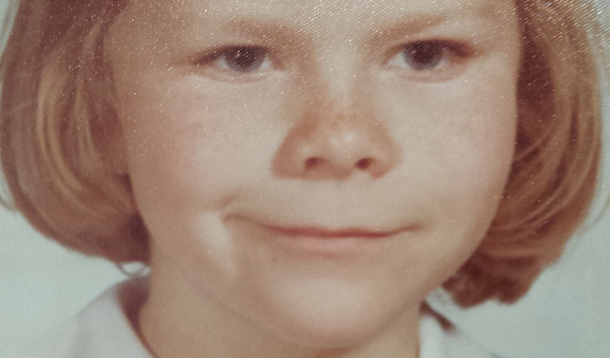 have never been a fan of school photos. As a child of the 70’s, in the days before digital (Yes, I’m THAT old!) we had ONE chance to get that photo right, but I NEVER did. I would worry I’d blink, so I would try to keep my eyes wide open, making my photo look crazy. I also tend to have a lopsided smile. 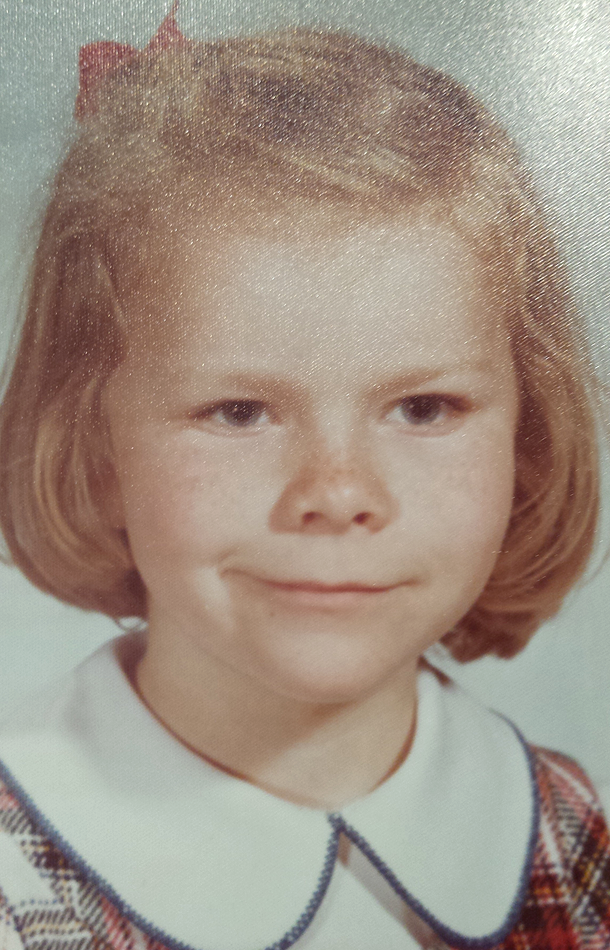 See? Side smile. Can you say "retake"?

Flash forward to now and I STILL HATE SCHOOL PHOTOS. First of all, it costs a fortune for some garbage phoney pictures of my kids. Second, this is the digital age, take 40 photos, and let us pick a good one. Not just two where my kid’s forced smile looks like he stepped in dog poop. (You know, the cringe-face smile!)

Well, last year picture day rolled around, as it always does. My younger son announced he was going to wear his suit and a tie. He also announced that no matter what the photographer tried, he would not smile or laugh, because they always make him feel uncomfortable. I told him I was fine with whatever he wanted to do. He seemed pretty pleased with the challenge he had put out there for himself, and headed off to school.

A few weeks later the proofs arrived. At pick up time, most kids were running out to show their parents their photos. My son emerged, looking down at his proofs, and slowly walked over to me, with a very serious look on his face. One of the school moms nudged me and said “Uh oh, what’s going on there?” As he got closer, he looked up, and his face turned into a bright smile.

“THESE ARE GREATEST SCHOOL PHOTOS, EVER!”

I took the proofs and checked them out. They were FANTASTIC. The first pose, my son is staring straight ahead, with a gaze that can only be called “Blue Steel.” The second, a maniacal grin that he felt made him look like an “Evil Genius.” I proudly showed all the parents the proofs, because, clearly, I had the world’s greatest son, and he had taken the world’s greatest photos. After much laughing, I promised that yes, this time we would order the deluxe package and share this magic with everyone.

Another few weeks pass and I realize the due date for ordering the photos had come and gone. RATS. Now I was going to have to pay a penalty on top of the already overpriced packages, but a promise is a promise. The two of us sat down at the computer, and headed to the photo company’s website. I had never done online ordering before for school photos, but when I did I was BEYOND delighted to find they didn’t have the standard five backgrounds to choose from, but over one hundred! I couldn’t believe my eyes!! We could take my son’s photo, and add whatever we wanted. We tried 90’s era prisms, seasonal backgrounds, flowers, dots, EVERYTHING. Suddenly my son grabbed my hand on the mouse, and yelled “STOP!!!” He’d found the background he wanted. The greatest finisher to the greatest school photo. 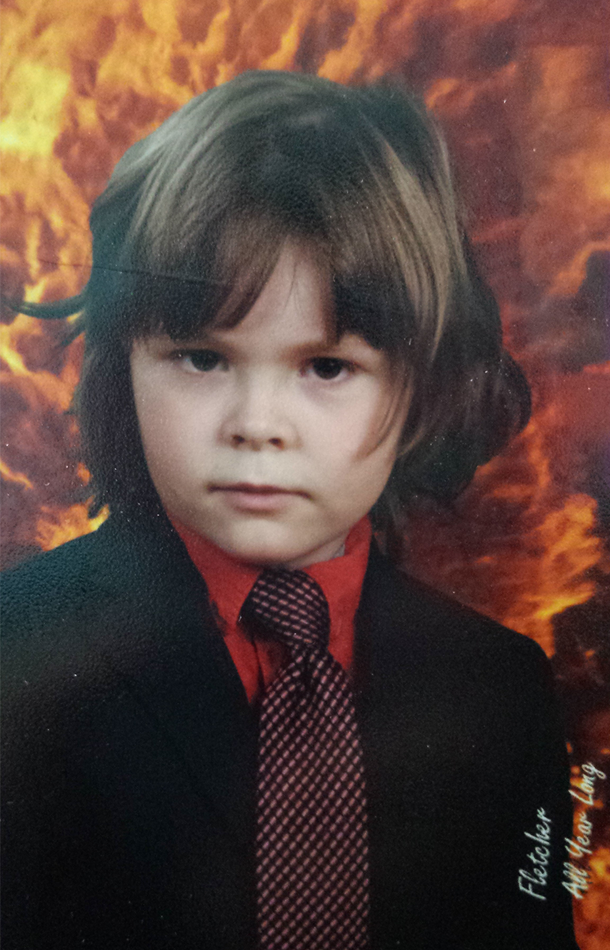 That’s right. He’s bursting out of flames. Why is this even an option? Who knows. Who CARES. I do know that an 8 X 10 hangs in my dining room, for us to enjoy every day. We ordered everything. Fridge magnets, calendars, placemats, mugs! The company even threw in this bonus collage: 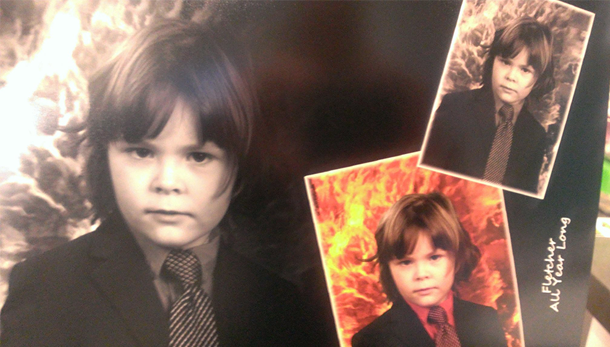 All Awesome. All. The. Time.

So thanks to my laziness as a parent, we discovered that school photos can in fact be fantastic. I used to roll my eyes when I’d bump into parents and they whip out their wallets to show off their kids, but now I am one of them!

“Oh, yes, you’re right. Little Suzy does look adorable in her school uniform! President of the Chess Club you say? Amazing. Well, let me show you Fletcher. HE CONTOLS THE WEATHER.” (mic drop and walk away) 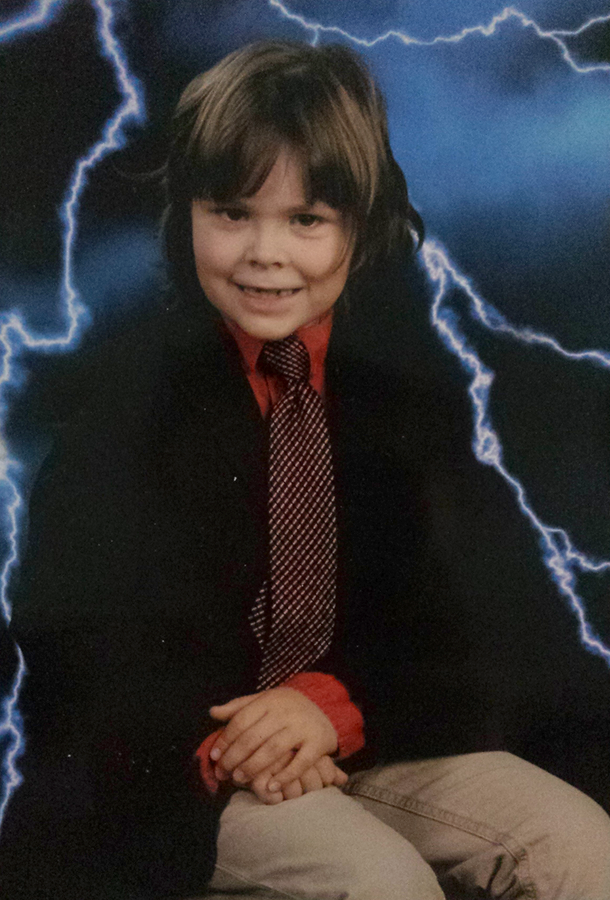 RELATED: Create an Easy Back to School Capsule Wardrobe Your Kids Will Love

Tara is a mom of two boys ages 18 and 10, from Toronto, Ontario. With her baby days behind her, she is working her way towards being a Crazy Dog Lady. Tara loves long walks on the beach, naps and potato chips. She has also been known to just sit and stare for hours. Tara hates housework and never has any money. You can find her on Facebook, IG and Twitter as @junctionmess or on her blog, www.junctionmess.com.