Research Says Sibling Rivalry is Good for Them

(But it's still going to make you bonkers.) 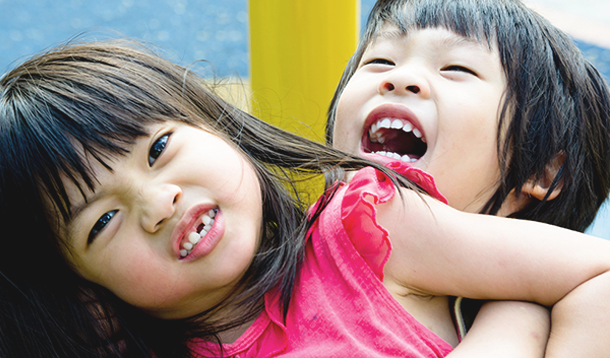 I'm a sibling-relations expert. I don’t hold a master’s degree psychology or anything. No. I came by this title a little less traditionally--through years of analysis, scrupulous study and first-hand experience in a household FULL of siblings--sixteen to be exact.

Growing up, our household was lively one--never short on activity, love, noise or heated sibling rivalry! Not a day passed that my siblings and I didn’t fight about something or other. With so many bodies in the mix, those sibling spars took on many forms—gangs that battled over tree fort territory, wedgie-wars, fart-tag, wrestling matches over the last piece of a 1000-piece puzzle, and a never-ending game of ‘last hit.’ One thing we seemingly all agreed upon was that, no matter what events transpired in the process, the person who struck the other person last won the fight (not unlike tag, I suppose). More than once, visitors to our house for Sunday lunch left thinking we were somehow hard up for a food, a faulty conclusion they reached after witnessing the ‘chicken face-off’ as we called it, in which Mom placed a sizable plate of chicken in the centre of the table which we savagely attacked with forks in a competition to get the breast meat.

My family laughs about these things now, giving pause to the patience exercised by our dear old deceased mother who bore the brunt of our antics. She rarely intervened—it was the 80’s after all—sparing her efforts for times when someone threatened to actually hurt someone. Being the youngest of the brood, I was a tattle-tale and many times felt spurned by injustice when she declined to step in on my behalf. Turns out she may have been on to something…

A study out of the University of Cambridge, known as Toddlers Up, makes the assertion that relations between siblings can actually have a beneficial impact on a child’s well-being. Dr. Claire Hughes from the University’s Centre for Family Research who authored a book on the study’s findings says, “The traditional view is that having a brother or sister leads to a lot of competition for parents’ attention and love. In fact, the balance of our evidence suggests that children’s social understanding may be accelerated by their interaction with siblings...” Sibling rivalry, according to Toddlers Up, was no exception. Younger siblings who engaged in disagreements and were on the receiving end of teasing from an older sibling showed an elevated social understanding over time.

Good news for me, I guess, but as I weather the sibling storms of my own wily children who now are getting bored and a little scrappy after a long summer lacking the structure that school offers, it doesn’t feel like good news.

It turns out being a sibling relations expert has done little to prepare me for my newly-acquired role as full-time referee in my own household. In fact, if someone had hired me to do this, I’m sure I would have been sacked months ago. To give you an example, this morning, on the five-minute commute back from the park, if you can believe it, all three of my kids nearly died of thirst in the car. After a morning of fun in the sun, the only water bottle with any liquid left in it was mine. Noticing this as we were packing up the vehicle, my youngest declared she was thirsty, so I passed her my bottle and started driving. Bad idea. At that point, my oldest began sputtering and coughing, ‘Aaaccck, my throat is SO DRY! (cough, cough) I need some WATER! PASS ME THE WATER!’ And my middle daughter chimed in, ‘It’s my turn. Pass me the water. I’m thirsty. MOM!!! I’M THIRSTY. Pass ME the water. MOOOMMMM!!! Ava won’t pass me the water!! AVAAA!!’

My coaching on this matter—‘Okay. Let’s take turns. Ava can you give Oliver the water now? Just pass it to him gently without spilling. You only need a sip. We’re almost home and then you can all have a big glass of water.’—did nothing to thwart the escalating cacophony in the back of the car. Miraculously, all three of my children were delivered from their imminent demise simply by arriving at home, where I frantically poured three nice, cold glasses of water, none of which were touched until several hours later.

Now, the experienced little sister deep down inside of me knows that the sibling feud that transpired in my car that day was never really about thirst anyway, and the rational adult in me who reads studies from Cambridge University can acknowledge that perhaps my children were all learning some valuable lifelong lesson in those five minutes but the underappreciated and stressed-out Mom in me just wanted to scream in that moment, “ARE YOU KIDDING ME?!”

It’s no joke that nothing prepares you for the challenges of parenting. It turns out all the sibling experience in the world and a bank of my own research on the topic don’t do me many favours when it comes to navigating the real-time conflicts of my own children. All I can do, all any of us can do, is to weather the sibling-sparring season of our parenting journey as best we can with the hope that there is learning and love to be found there as much as anywhere else.

RELATED: My Toddler's Got Game