I had plenty of opportunities to screw up. Which I did. 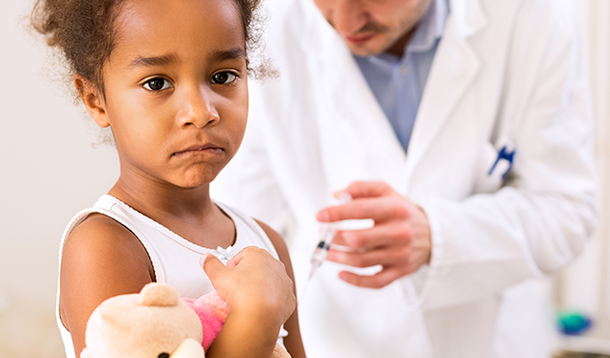 Before I write about the fear of needles, there are two things I need you to know: The first is that the needle stories I’m about to tell you were not my finest moments in parenting. In fact, they would likely be in a top 10 list of my absolute worst “mom moments.” I’ve beaten myself up quite a bit for them but I’m choosing to share so other parents can avoid the mistakes I made.

The second is that my son was not permanently scarred by my idiocy, making me grateful for small miracles.

While I’ve never enjoyed getting needles (who does?) I’ve never really been afraid of them, either. But from a young age my son has been fearful and this isn’t surprising since in one study over 90% of toddlers and 45% of 4-6 year old children experienced serious to severe distress during vaccinations. Add on a diagnosis of severe allergies at 15-months-old and having to get skin prick tests every few years, on top of regular immunizations… well, let’s just say I had plenty of opportunities to screw up. Which I did.

That brings me to my first don’t.

The first time he went for skin prick tests, we didn’t tell him what was going to happen except to say they were doing a few tests to see what he was allergic to. You can imagine how well this scenario played out when he discovered what the tests entailed while we were in the allergist’s office at the hospital.

If you pictured screaming and nurses holding him down, you would be right.

Instead, prepare your child using age-appropriate language and use techniques like this to distract him when he is getting the needle (or in this case, the allergy tests).

Don’t Tell Them to Suck it Up

Yes; I said this in a moment of frustration and yes, I do beat myself up for it. Trust me, there’s nothing you could say to me that I haven’t already said to myself 10 times over.

Instead, listen to your child’s fears and let them know you understand what they are feeling, and that you will do everything you can to reduce their pain and/or anxiety.

Also, let the nurse/doctor know that your child has a fear of needles. There are things they can do to minimize the pain. The nurse at our doctor’s office is spectacular at using distraction while giving a needle, including wearing a rooster hat.

At one memorable doctor’s visit, I had taken both my sons for immunizations at the same time. My older son went first with no problems at all. Once he was done, my younger son sat on my lap so he could get his shot.

That’s when I looked over at my older son, only to see his face had gone quite pale and he looked like he was on the verge of passing out.

The stress from the anticipation of the needle had made him feel faint. The actual name for it is vasovagal syncope and it’s caused by a sudden drop in heartrate and blood pressure because your body overreacts to getting a needle. While fainting itself isn’t harmful, it can lead to injuries from falling and/or an increased fear of the needles.

The nurse and I got him into a chair immediately, she gave him a cookie, and he was completely fine shortly thereafter.

Even after the needle is over, always keep a close eye on your child.

If you have a child who is afraid of needles, getting a vaccination in school in front of their friends can be their worst nightmare.

To avoid this, I instead made an appointment with our Public Health Department (See? I learned from my mistakes,) and had it done in an office setting with no schoolmates around. Check to see if this is an option in your area.

Last but not least, read these #ItDoesntHaveToHurt articles which provide useful tips to help parents minimize their child’s pain when getting needles.

Learn from my ginormous (but preventable) mistakes, because when it comes to getting needles, it really doesn’t have to hurt.

Oh, and let me add: You’ll be happy to know amount the of distress and pain reported during needle procedures tends to decrease as individuals get older. Earlier in the year my son had to get stitches and a tetanus shot. I told him what was happening every step of the way, making sure the doctors and nurses knew he wasn’t keen on needles, and distracted him throughout and it was a success. Seems that even this old dog can learn new tricks.

Category:
Kids
Tags:
needles
vaccinations
pain
fear
hate
injections
what do I do when
child
toddler
it doesn't have to hurt