it happens. No biggie. 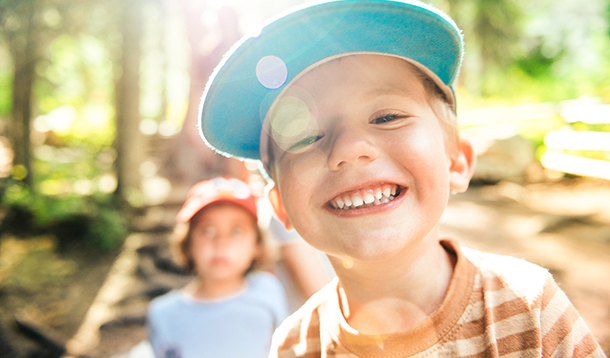 My son could be in the Guinness Book of World Records for making urine. He can do it in his sleep… quite literally.

At five-years-old, it’s not uncommon for him to wake up with a wet bed and pajamas, and that’s with a pull-up. So, when he headed off to his very first overnight beaver camp, we were a little concerned about peer pressure.

I don’t care if my son pees his pants. I might be frustrated. But it happens. No biggie. I sometimes hear from parents about how embarrassed they are on behalf of their kids and I try my best (occasionally successfully) to avoid that. But I also understand how peer pressure works. I went to school. Hell, I’ve still got friends that can peer pressure me into things and I’m (technically) a grown man. So, my concern was of the “what if the kids all make fun of him” nature.

My wife dropped my son off in the morning at camp and then returned home, planning to head back out at night to do the actual overnight camping with him. When she got home, I took my daughter to my mom’s house for an overnight and then returned home to a house that was empty except for my wife and I, which is something that never happens in our house.

And you know what that means?

We vacuumed the whole house and cleaned the garage. It was incredible. We still fantasize about it a little bit.

After some much-needed home maintenance, we decided to head out for a late lunch/ early supper at one of our favourite local restaurants. While there I kept my phone facing down so that our rare date out wasn’t interrupted by texts and tweets and fantasy football draft notifications. As we finished our incredible vegan charcuterie board (I know, I didn’t realize that was a thing either), I turned my phone over and saw that I’d received a phone call. A PHONE CALL. And a voicemail. If you’re unfamiliar with how phone calls and voicemails work, don’t worry. It’s like a text message where you talk.

The following is a transcript of that phone call.

“Hey Mike… It’s Ringtail (I love beaver nicknames). Ummm… no big deal… and… mostly my fault. But Jack had a little accident. We were on our way back from a hike and he told me that he needed to pee, and I said okay great, we’re almost back, and I didn’t realize that he basically meant that he was going to pee now and we needed to deal with that. Just wanted to keep you in the loop, so when your wife comes back, she could maybe bring an extra change of clothes.”

Now my wife had sent clothes, so it’s not like out son was running around naked covered in urine, but we decided that maybe bringing ANOTHER set of clothes wasn’t the end of the world. So, she did. And it was a good thing, because he peed twice more.

He was excited. He was out of his element. And so he peed himself. Several times. And you know what? No one cared.

No kids made fun of him (and plenty of them knew), and he didn’t flinch about it. Obviously, we talked about the importance of trying our best to avoid it, but that’s the extent of the conversation. I was proud of him. I’ve spent a great deal of my life being terrified of what people think of me. My son really doesn’t care. He likes (loves) people. He will regularly hold the hands of parents and other kids. He hugs. He kisses (sometimes we have to reign that one in). He’s well liked by his peers. But he just lives his life.

We’ve done our best to not make big deals out of things that are not big deals to him. This doesn’t mean excusing things that we know are important like personal hygiene and proper manners. But rather than we don’t impose our limitations and fears on him.

I can’t imagine what I would do if I peed my pants. My kid? He made a bunch of friends.

RELATED: Every New Mom Needs To Read This: Pee First