I Survived Raising a Power Puker

Here's how you mitigate. 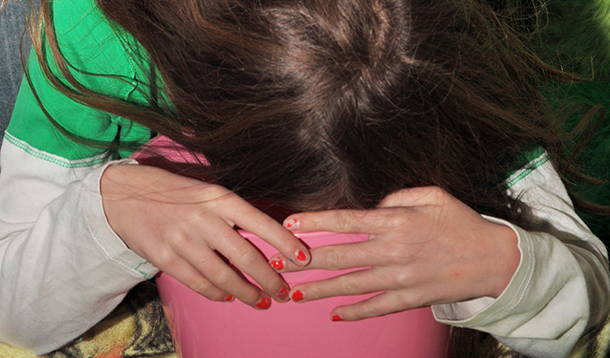 A few weeks ago, we headed off to a remote cottage, about 5 hours from home, to spend time with some family. We arrived a couple of hours past the kids’ bedtime because we had used the trip to visit some friends from out of town. And when we arrived, we discovered that several members of the family were sick with the flu.

As you can imagine, I was not excited.

Given that we would be spending the next few days in close proximity with the family it was pretty obvious that we weren’t going to escape unscathed. And in the end, we didn’t. My son became ill (luckily for a very short period of time) and power-puked upon our return home. But this is not our first puke rodeo, so we were ready.

My son developed something as a toddler called abdominal migraines. Basically, it means you puke a lot. Once a month, for almost a year, my son would wake up shortly after going to bed and throw up all night long. There would be no other symptoms. He’d be fine the day before, fine the next day (except a little tired from being up all night throwing up) and so it wasn’t the flu, it was JUST vomiting.

Sufficed to say, we have some experience dealing with puke.

The first thing we learned was to layer. When you’re going to get up several times through the night to deal with a bed full of throw-up, you start to think about ways to mitigate. So, when we knew it was going to happen (like our return from Camp Puke) or when it had already happened once in a night, we’d prepare his bed. We’d start by making his bed as usual. Then, we’d put a towel down that covered the areas that were mostly likely to be “hit.” This would often mean that instead of changing an entire bed, we’d simply have to remove the towel and change whatever top blanket got hit. This allows both you and your child to get back to sleep quicker.

The last time around, we put an entire layer of bedding on top of the existing bedding… and our son carefully threw up in the bucket we put beside his bed. Because once you’ve prepared for something effectively, where’s the fun in destroying it?

But that brings us to our second point: the bucket.

Kids are actually pretty good with things like this, and we found that after a few times, our son was able to understand that he was going to be sick and throw up in the bucket instead of his bed.

One of the things that has really changed the way we deal with the flu or similar illness is the way we look at eating. Our children are VERY good eaters. They eat foods that shock a lot of people. One of their favorite snacks are mushrooms and they don’t like candy. It’s kind of awesome. But sometimes they don’t feel like eating and like most parents, we used to really force the issue.

“You have to eat all your supper or…”

But we’ve come to look at food from a daily or weekly basis. Sometimes they want a big breakfast, sometimes they don’t. Sometimes they eat several bowls of pasta for supper and sometimes they just pick. We tend to push that every meal must be eaten in its entirety, but now we look at food from a daily basis. If the kids ate a HUGE breakfast and lunch, maybe they’re not going to be so hungry for supper. And vice versa. And when we don’t force kids to eat when they’re not hungry, we’re also not forcing them to eat when they’re sick, and it makes a huge difference.

Now one thing that we DO force when the kids are sick is water intake. Dehydration is terrible for anyone, but especially for kids. Even if our kids don’t want water, we push it heavily during sick times. Among other positives, water acts as a lubricant, so that even when they don’t have much in their stomach, throwing up doesn’t feel as bad as it could.

My biggest piece of advice is to be aware of how your kids are acting and feeling. We’re sensitive to changes in our children’s behavior and temperament and can usually see an illness coming on just based on how they’re acting.

Kids will often give you a lot of lead time to prepare or a bout of something. So, as the boy scout’s motto says: be prepared.

RELATED: It's My Party and I'll Barf if I Want To