Raising Girls One Christmas Tree at a Time

Where There is Ruin, There is a Hope for Treasure. 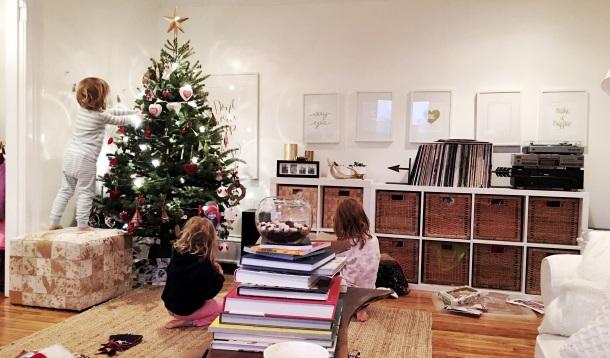 A couple weeks ago, I was driving my girls home from school when my four year old daughter piped up from the back seat that she was “so excited to go and get our Christmas tree.” Her twin sister echoed the sentiment by suggesting we go “back to the tree farm” that we visit each year. My six year old daughter chimed in with an sympathetic “ohhhhh. But that means we’ll need a man; because to cut down our tree we need a saw, and saws are just for mans.”

At first I nearly choked with laughter, just before the stark reality of what that meant, and the inherent need to course correct that thinking kicked in. You see, my marriage ended about a year ago, and the time following has been a year of firsts, including a steep learning curve of “things I didn’t know how to do, that I didn’t know how to do.”  Things like checking my oil, filling my washer fluid, paying my bills, dealing with late night plumbing emergencies, and other such responsibilities that, for the last several years of my life, were conveniently filed under “divide and conquer / not my job.”  Without even realizing it, for the bulk of adulthood, I had happily delegated a whole whack of basic life skills that I was either too afraid of, or too disinterested in, to someone else. A truth that carries some residual threads of shame for me, but a truth I own nonetheless. Although seemingly very simple tasks, when we are fearful of anything, and don’t confront it, the fear and the challenge of that confrontation grows stronger.

Suddenly, hearing how my (lack of) actions had been perceived and interpreted by my daughters - the future women of the world - reared its unbalanced and impractical head in the backseat of my station wagon. Right there and then, halfway between school and home, the importance and the gravity of raising little women became crystal clear to me. Divorce is a trip. It’s really big deal - to say the least - rife with loss, grief, change, and strife. It’s like being trapped inside a snow globe that somebody keeps shaking up, and every time you land, and just start to get settled, adjust your bearings, and figure out where you are, someone picks it up and shakes the hell out of you all over again.

However. With every new challenge we encounter in this life, comes the opportunity to persevere, adapt, garner confidence and momentum, and grow in previously unimagined ways. Although divorce can be seen as the end of what you knew, and the beginning of what you know, as with anything, you can let that experience define, or redefine you. You can choose to see yourself as victim that divorce “happened to,” stay in the past, and be resentful of that experience in perpetuity; or you can process that loss - which is no easy feat - of love, of family, and of friends in a way that shapes you, creates you, and transforms you into a truer and more authentic version of yourself.

Rumi said “where there is ruin, there is a hope for treasure,” and from the ashes of the life I had, I am living the life I have now. A life that includes saying yes, looking fear in the eye, resisting the urge to puke my guts out in doing so, and pushing through to the other side. The treasure for me has been gaining clarity on who I really am, what I really want out of this life, and beautifully, a stronger and deepened bond between my children and I. Every time I embark on a task that is new and a little scary, I make sure to do it with, or in front of my girlies, so that they can start to learn all of the basics from light car repair to cooking to rolling our eyes at a pot light that just won’t go in, or a toilet that just won’t stop running.  In learning how to raise three little girls in a more holistic way, I’ve learned how to raise four women: strong, grounded, capable,  independent, and adventurous women who love themselves and who love each other, fiercely…and even know how to use a saw.

I am proud - and frankly a little giddy - to say that this past weekend we met with a few close friends at the tree farm, and, borrowing a saw from one of my best girlfriends, sawed that tree like a mother. A perfect and pretty little tree around which we will gather, get cozy, laugh, play, and ultimately create new and different memories for years to come.

RELATED: On the Idea of Raising Our Girls with "Ladylike" Behaviour