YMC Members Share Tips To Help You With Bedwetting 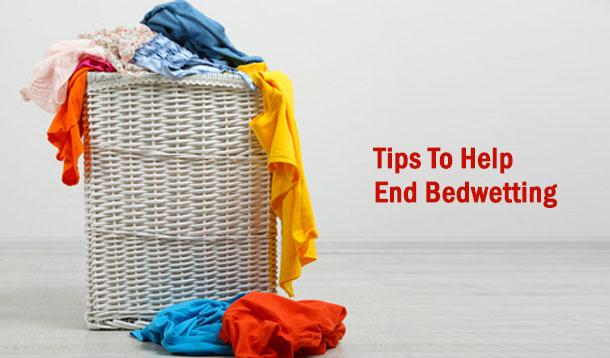 It’s a lonely job changing wet sheets in the middle of the night.

While bedwetting is common, it is also very emotional and can make both parents and kids feel sad, embarrassed, and frustrated. But here’s the good news...going through this phase and having these feelings is totally normal and you’re not alone! We know because when we asked YMC Members across Canada to share their personal stories about bedwetting and how they dealt with it, our email filled up with moms willing to share.

We hope their helpful tips and tricks help you to create a strategy of your own to help your little guys and gals stay dry through the night.

My five-year-old son Max recently stopped wetting the bed at night. It took a while for him, but it was not a stressful time because we never put a lot of pressure on him, and it worked. While my mother-in-law told us to wake him at night to go pee before we went to bed ourselves. That never made sense to me so I decided to stick with my own instincts and we use lots and lots of nighttime underwear.

TIPS: We bought a small Star Wars calendar for him and every morning he'd draw a face in that day's square — a happy face for a dry morning, a sad face for a wet one. When he got 10 happy faces in a row, he'd get a small reward. Then we'd make the goal more ambitious — 25 smiles in a row, for another small reward. He was proud and excited with every happy face. But when he had to draw a sad face, we shrugged it off and started over, no biggie. Eventually, we got all happy faces—on the calendar and on all of our faces.
Vicki M., Torbay, N.l.

My oldest daughter who is now ten stopped wetting the bed a year ago but has had a few accidents in the last couple months.  My son who is seven is still currently in nighttime underwear and every morning when he wakes up it’s full. Unfortunately, I believe that bed wetting is also something that can be inherited and their father’s side of the family has a history of it.

TIPS: I cut down on their drinking and limit them to no full glasses of anything after dinner. They can have a sip of water before bed but that's it.  Most importantly, I never make them feel like wetting the bed is their fault either because it's not.
Jessica T., Mississauga, ON

“When you give me a diaper, I don’t pee. I don’t know why.” This is my 7-year-old daughter’s story and she’s sticking to it. The present-day “diaper” she’s referring to is GoodNites disposable underwear.

What’s most challenging for my daughter is the fact that her younger sibling doesn’t have this problem. She is embarrassed by the habit but she doesn’t feel while it’s happening and can’t control it. She has even asked me to get her out of sleepovers.

TIPS: I increased the number of times I woke up at night to take her to the bathroom. Strategy paired with trial and error landed us on two specific times that worked beautifully. Eventually I grew exhausted by this option so we then relied on GoodNites disposable nighttime underwear. My mom still keeps new packages in her home so she’s prepared when the grandkids sleep over.
Sasha-Ann S., Markham, ON

My daughter is a former bedwetter and went through stages. Between the ages of five and six it was almost nightly, then as she grew a bit older it was less frequent but almost more frustrating. Every time we thought we were past the issue it would happen again.

TIPS: When she was younger we thought it was just one of those things that everyone experienced, but as she got older we began to pay closer attention to what was happening in her life on the nights where there was bedwetting. We tried limiting liquids before bed, would wake her up at 10pm to pee, and then finally discovered that bed wetting for her occurred when she was overtired.  A consistent bedtime (plus the reduced liquids before bed) seems to have been the magic trick for us.
Heather G., St. Albert, AB

At just over two and a half, my third child is dry all day every day yet keeps wetting the bed. She’s young enough that most people wouldn't even describe her nighttime underwear crutch as bedwetting. Instead, they'd just say she isn't night-trained yet.

TIPS: Limiting fluids at bedtime is the number one thing for us all, right? Next, with my other kids, ditching the diapers and letting them wet the bed for a couple nights in a row was all it took. Finally, making a run to the toilet first thing in the morning is crucial. I'm convinced most of the accidents happen just before waking up.
Rebecca K., Toronto, ON

It took a lot longer than usual to teach our son to use the potty and to date, at age five, he still has trouble getting through the night and remaining dry. It is a struggle for William because he wants to be a "big boy" and be dry at night, but is such a heavy sleeper he just does not wake up to use the bathroom. I truly believe the stress of thinking about it each night causes him anxiety during the day.  It has caused tension between my husband and me as we both have different opinions on how to treat bedwetting.

TIPS: Using a sleep pant or nighttime underwear is part of our nighttime routine for now. We have tried limiting the intake of liquids in the evening hours and while that was fairly easy to implement, it still did not result in a dry bed. When we wake up William in the middle of the night this usually means a dry morning, however it also means an extremely grumpy and sleepy child the next day. We have recently resorted to using a monitor that sets off a bell when the monitor gets wet. I am happy to report it at least wakes me up.
Suzanne R., Brampton, ON

My nine-year-old son Jack has never been able to stay consistently dry for the night and waking up dry is a very rare occurrence in our house. I believe he is just a really sound sleeper. He plays hard all day long and as a result he sleeps hard all night. Recently he’s faced the challenge of sleepovers so we’ve come up with strategies that will let him participate and still keep his bedwetting a secret from his friends.

TIPS: Jack has a goal of three dry nights After which he's allowed to go to bed without nighttime underwear on. We've tried limiting drinks after a certain hour and waking him before I go to bed but he’s a zombie and zombies don’t pee well at night.
Christine J., London, ON

My son is four years old, and doesn't stay dry through the night. He's like a pee ninja — able to leak through almost anything, and in the strangest of places. He's managed to pee on comforters and duvets, on pillows and even on his poor sister's head. Honestly, it's like his superpower to pee great volumes during the night, despite him having no drinks within an hour of going to sleep.

TIPS: We've resorted to lining the mattress with garbage bags, layering him up, and even set an alarm labeled "Squizzle Patrol" to remind us to take him to the bathroom around 11pm every night. I'm excited to say that for the first time ever, this week he has started waking to go to the bathroom himself. Could this be the end of wet beds? I sure hope so!
Alexandria D., Toronto, Ontario

Since my son and I co-sleep, bed-wetting is a whole other bucket of fish for us. Do you know what sucks? Washing your queen-sized duvet in the bathtub because your kid wet YOUR bed. But it gets better! You're covered in his urine too. *Sigh* He's crying because he's tired and doesn't understand why he needs to be stripped down and bathed at 4 am.

TIPS: We’ve started taking preventative measures: no drinks or snacks in the hour before bed, and the last thing we do is use the potty. When nighttime accidents *do* happen, I try to gently explain to my son that it's not a big deal (even when I'm tired and frustrated), because he doesn't need to feel shame on top of everything else. He wore nighttime underwear during potty training so now that he’s graduated into big boy underwear there’s a level of pride associated with that. He will wear nighttime underwear if it looks like underwear. If he isn't wearing nighttime underwear he makes sure he doesn't need to pee before he climbs under the sheets. And Mommy has invested in a great, waterproof mattress protector. And a second duvet, just in case.
Ashley M., Halifax, NS 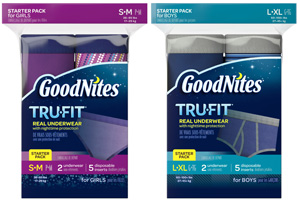 One in six children between the ages of 4-12 suffer from enuresis, also known as bedwetting.

Need more tips to help you cope with your child's bedwetting?

Dr. Kim Foster shares tips on how to get through your child's bedwetting phase

YMC Blogger, Kat Inokai shares her personal experience with her daughter's bedwetting and how they are winning the bedwetting war together.

GoodNites* TRU-FIT* can help you and your child get through bedwetting.
GoodNites* TRU-FIT* are washable, cotton-blend real underwear that are durable and reusable for outstanding nighttime protection. They are accompanied by a disposable, absorbent insert designed to protect sheets and PJs all night.

This is proudly sponsored by our friends at GoodNites*.
www.tru-fit.ca