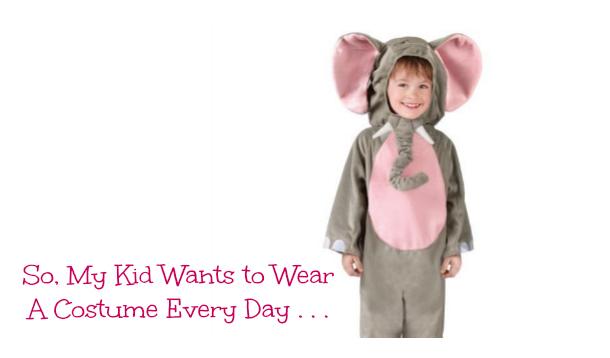 A few weeks ago, I was standing in line at the grocery store, juggling a basket full of food and sundries, and keeping an eye on my 4-year-old daughter, who happened to be dressed in a cowgirl costume—complete with red boots and matching hat. A woman standing in front of me turned around and, without really even addressing me or my daughter directly, snidely remarked, “Halloween was over two months ago.”

She was right. It was not Halloween, nor were we headed to a costume event of any kind. My daughter loves playing dress-up. Her choices run the imagination gamut from superheroes and princesses to basically any animal. I encourage creative play and, occasionally, I find reasonably priced accessories to add to the “costume trunk.” What can I say, I dressed up as a pioneer, nurse, or “movie star”—feather boa, jauntily tilted hat, gaudy jewelry and elbow-length gloves—pretty consistently when I was five or six. Heck, I still love costumes!

I’ve learned I’m far from alone in having a kid who wants to play dress-up every day. Conversely, some of my friends have had issues with wanting their toddler to don a fuzzy duck costume they bought for Halloween, only to have the child refuse. Kids have preferences. It’s our job to keep them within reason. With that in mind, here are a few tips I’ve picked up for dealing with a young lady (or young man!) who only wants to wear costumes:

Listen to them. Ask why they prefer the costume to “real clothes” and give them the respect of actually listening to their answer. Someday your child will grow out of their “dress-up” phase, leaving you with great memories of your little cutie in a tiger costume. And possibly a surly teenager who denies they were ever into Blues Clues. Just another phase, folks!

Need more tips on overcoming those difficult parenting challenges? Check out "5 Ways To Get Through Tough Parenting Moments" and "The F-ing Fours."

Lydia Mondy is a part-time blogger and a full-time nerd.