I Want My Kids to Be Weird

Because Those That Matter Don't Mind 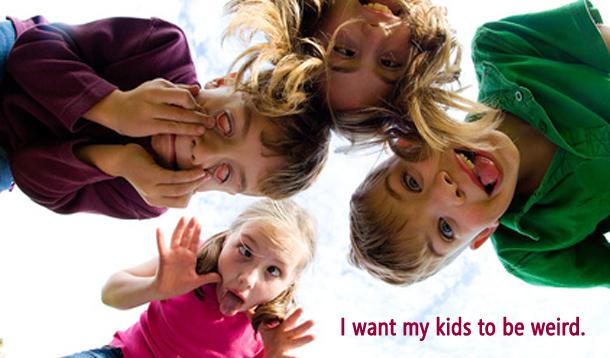 A few months ago, I posted a photo of my son playing with a cheap dollar-store style doll; let’s call her “Shmarbie.”

"Shmarbie" and my son in the photo seemed to get some reactions out of people.

“You shouldn’t let him play with girl toys, it confuses him.”
“First it’s 'shmarbies' and then it's dresses and nail polish.”
“He’s going to grow up to be weird!”

The only response I could think of was, “…And your point is?”

You see, I WANT my kids to grow up to be weird. I’m not pushing them to be weird; they are who they are. But if they’re odd or different, I’m okay with that.

I was weird. I was as weird as they get. Okay, maybe not AS weird as they get—there was a kid in my class who ate the hamster poop and nobody even dared him to!  But, growing up I was definitely weird.

At the time, I entertained the idea of being popular for a few minutes, but watching the TV shows and seeing the kids in my school who fell into that “popular” category, it didn’t really seem that ideal to me for very long.

You see, unlike me and my “weird” friends, those kids had pressure. They had to fit in. They had to have the best, most expensive clothes and gadgets. They had to be rude and hurtful to kids like me, because if they weren’t, they weren’t cool. People judged them because they were jealous of them, and other people hated them for no reason at all. Of course, I wanted those things, but I knew that those things didn’t make me who I was. I understood that as an eight-year-old, yet somehow as grown adults, people are still trying to convince themselves that if their kids don’t fit in that they’ve somehow let them down as parents.

“If I don’t buy this game for my son, all of the other kids in his class will have it and he won’t, and he’ll be left out!”
“My daughter has to have an <insert fad here> birthday party, or the other kids won’t come.”

My awkward pre-pubescent years—and the bullying that came along with them—are what helped me become a better, more accepting person. Because I was picked on, I was able to see that the kids doing the picking, the ones who were supposed to be the happy, fulfilled popular kids, were missing something vital: a conscience, an inner monologue, and a vision of their future. They were so immersed in their lives, they couldn’t see the forest for the trees.

Bullying has been around as long as kids have been around; kids are only as disrespectful as we allow them to be. The difference is that now they have more channels to do it on. As parents, the onus is on us to teach our children how to respect themselves enough to respect others, and to know that when they are being disrespected, it speaks volumes about the person who is treating them poorly than it does about who they are as individuals.

I want to raise my kids to be strong enough—fulfilled enough—to recognize that the lashing out, the cliques, and the garbage that comes with being a kid and a teen is just temporary. That if anything, it’ll help shape them as individuals. I want them to know that people who are so short-sighted that they place material objects, looks, and status above personality, kindness, and maturity, should have no bearing on their self-worth. I want them to value being individuals. I want them to do what will make themselves happy instead of what they think will make people like them, and to take pride in who they are, and most importantly, who they will become. I want them to know that, “Those that mind don’t matter, and those that matter don’t mind!”

I blog at Crawl The Line... my kids are Cash & Carter. (Can you figure out the connection?)

If you're looking for delicious recipes and pin-worthy decor, keep looking because this is not your mother's blog! I'm a self-depricating, humour-filled mom-blogger slash social-media-specialist who is a little bit country and a little bit rockn'roll.

I used to tour with bands as a merchandising sales consultant (yep, that's a real job) and then well... when life gives you embryos.... you, you know.. get a job where you don't live on a tour bus. So, I made some babies and got a job as a digital marketing specialist.