A Safety Precaution Or Helicopter Parenting? 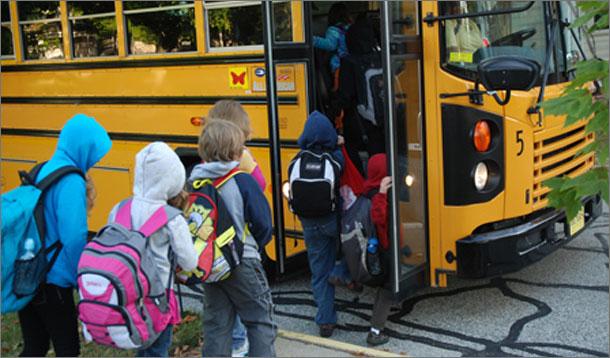 My daughter started grade one at a new school this year. That means there are a few changes around here. And by “a few,” I mean pretty much everything we were used to has changed.

She left behind the school she attended for both junior and senior kindergarten (along with the vast majority of her friends and the staff we’d grown to love). She’s starting French Immersion. (Her French consists of mumbling a line she heard in Barbie and the Three Musketeers.) Her old school was a two-minute walk from our front door, required no street-crossing, and everyone knew us on that short trip. Now she takes a bus with a bunch of kids she doesn’t know, most of whom are much older than she is. She used to come home to have lunch every school day—now she has to stay at school. She’s in school full-time as opposed to the old all-day, every-other-day routine.

And perhaps the biggest adjustment of all: she has to be on that big old bus a full hour before she used to even wake up. I have to tell you, that part completely stinks. On her second day, she grumped to her Daddy, “I never get to sleep in!”

Oh kid, you have no idea.

The picture I’m trying to paint here is one of tremendous upheaval. All this thrown onto a kid who has yet to turn six and is adverse to change. So I get what it’s like to have a kid go through all this momentous change, I really do. Is this a good time to also tell you that I dislike change? That I’m ridiculously nervous about how my little girl will ﬁt into her new class? Or that I fear the adjustment to the new language? Or that I have irrational visions of bus accidents or bullying or a million other things?

But here’s the thing: I figure that it does me no good to project my fears onto my daughter, so when she confidently gets on that school bus, I smile and wave and rah-rah-rah her independence, then shufﬂe home and cry a few tears on my own. I don’t hop in the car and follow her to school, hide behind bushes, or question the abilities of the driver and staff who are meant to get her where she’s supposed to be, safely.

Another parent at my daughter’s bus stop waved her child onto the bus, then hopped in her car and followed them to the school. I asked her why, and she said something along the lines of just “wanting to make sure everything is okay.”

Now, parents have been asked not to do this (by the administration) because it clogs up the traffic around the small residential neighbourhood the school is in. The parents can’t actually drive up anywhere near the school unless they’re dropping a child off; they have to park a few streets away and walk to the school. So after being told all this, it never crossed my mind that following the bus was A THING. I’m supposed to follow the bus? To ensure it arrives? Or watch my daughter get off the bus and be immediately ushered to the back play yard by a teacher? Why? What information am I supposed to garner here?

I asked on Twitter whether I was “supposed” to follow the bus, and the answers were on polar ends of the spectrum. I heard the parents saying that yes, they follow the bus to school. “To watch [my] kid get off the bus” or “My child is nervous, this is a big change! Of course I follow the bus!” and I heard the others say, “Whup, whup, whup! Hear that? It’s the sound of a helicopter parent descending. Yikes.” (@MissJoyFG) Many expressed concern over parents following the bus, indicating that it could affect the child’s confidence or independence. Others felt it was just the way things should be done.

I was left somewhere in the middle, wondering if I was being irresponsible by not following along to “make sure” that bus driver knows what he’s doing. On the other hand, I was feeling pretty proud about not hovering over my daughter.

So tell me, is following your child’s bus to school a smart safety move, or is it helicopter parenting at its ﬁnest?

Alex is the voice behind IDontBlog and former YMC Allergy writer. She’s an entrepreneur and an outspoken online presence.