It's a jungle out there, folks. 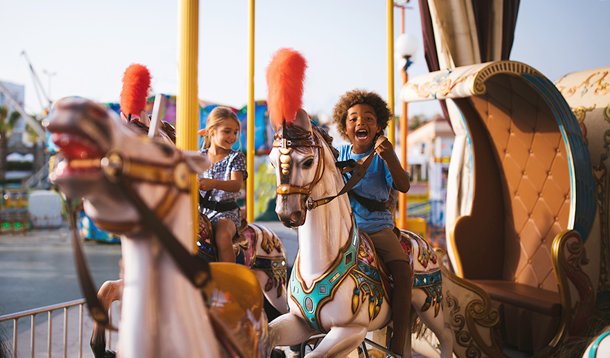 It’s been a rough summer. My children began the summer by declaring war on each other. Every day (outside of camps) was marked with INTENSE fighting and arguing and at the end of each day I just collapsed with exhaustion and, if I’m being honest, a little bit of sadness.

And then came amusement parks.

I’ve been terrified of taking my children to amusement parks. And when I say terrified, what I REALLY mean is…terrified.

My wife and I worked very hard to make this a good experience for everyone and here’s how:

In the words of Bobby Boucher, “that’s some high quality H2O.”

And on a day where your kids are running around at top speed, sweating like it’s a statistics exam in the hot, hot sun (amusement parks SOMEHOW have the climate of the centre of the earth) they’re going to need water. Don’t rely on buying water. First, it’s incredibly expensive and second, it means more time spent in line with angry children and less time spent on rides. Kids will drink water BUT if you make water an obstacle to the roller coaster, they will straight up fight you.

Garbage In, Garbage Out

Our kids eat a little differently than most. GENERALLY this means no refined sugar potato, soy or dairy. These are two of the four food groups you can find in an amusement park. Now potato, soy and dairy are based on intolerances…but sugar…that’s a whole other story.

Amusement parks days are LONG days. In many cases, it’s long walks between rides and long waits in line. And if you’re kid is having a sugar crash while you’re trying to drag them between The Defenstrator and The Wing Dinger, you’re in for a treat.

If you’re going to have some treats at the park try making it a treat for the end. Have them crash in the car on the way home. Now obviously you don’t want to amp them up for bedtime, but this helps avoid those mid-park freakouts.

That being said, people need food to survive. Bring some. If the park is small you can pop out to the car at one point for a snack or lunch but if it’s larger, bring a cooler bag in a comfortable backpack. Feed them good food and (generally) good behavior comes out the other end.

I would not have made it without my wife. This year my son was large enough to go on almost every ride solo and my daughter was too small to go on a lot of rides even with an adult. If I had done this solo, it would have sucked.

But it’s more than just being lucky enough to have two of us there. We also made the conscious decision to divide and conquer. We set times and places for regrouping and went our separate ways whenever we needed to. While we were there, I saw a lot of small kids wistfully watching their bigger siblings having fun and just as many bigs looking bored outside the teacups.

Patience is cool. But if you spent eight-hundred-dollars and swore a blood oath for a day at the park, you might as well enjoy it to the fullest.

My son is not very independent. However, this year he was extremely excited to experience some of these things on his own. So, within reason and as long as safety was considered, we let him do his own thing. When we arrived at Magic Mountain he strapped on a lifejacket and climbed the stairs to the third scariest water slide at the park.

And we let him.

He was a little concerned about all of the places that water went inside his body (Demetri Martin recently described water slides as the intersection point in a venn diagram of vacations and enemas) but he got off the slide and was super excited.

More underwater (with a lifejacket).

And two days later he walked into the ocean and just “decided” that he could swim.

Giving him that little bit of independence at the park let to him taking more, appropriate risks.

Amusement parks were the highlight of our summer this year. They were the one day that our kids didn’t fight (much), didn’t (always) complain, and had a wonderful time. This wouldn’t have been possible if I didn’t have a wife that was great at planning food and drinks and a strategy for being in a busy place full of things I’m terrified of.