A Leprechaun Trap is the Latest Abombination in Special Occasion Inflation 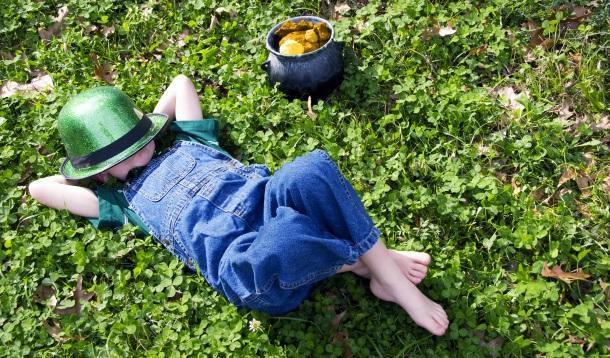 Seriously, in a historical context, did the Irish bait candy-bearing leprechauns into a trap with plastic golden coins which they could then magically escape leaving behind only the candy and a dainty set of muddy tracks across the kitchen floor? Because that's what my kids would have me believe, and these are the events that they are fully expecting to transpire this March 17th.

You know what? Don't even tell me the answer, because even if it is yes, these events will most definitely NOT be transpiring in our household. And, you know why? Well, despite one half-assed attempt to impress a guy by drinking Guinness when I was 22, I am not Irish. Two, damned if I am going to actively create mess on the floor for my kids' entertainment. Three, I don't have any f*&king plastic coins, and four, most poignantly, most emphatically, most fist-pounding definitively, I am done with the whole over the top culture of special occasion inflation.

It all started with a potty party. In my infinite new parent wisdom, I deemed it wise to make my son’s inaugural poo-meets-bowl moment a BIG event involving balloons, a grand opening of a big-boy pair of undies, and chocolate (eww). This was the first in a long line of fabricated and exaggerated ‘special occasions’ at our house designed to nurture what I now see as a robust sense of mediocrity in our children. For this one, I blame Sally McSmarmy who posted Instagram pictures of her daughter’s potty party, complete with topographic shots (I shit you not, pun intended). After she boasted about her success, I gave it an old college try, an effort which was met with little success and followed by more subsequent potty parties than I care to admit.

Aside from these and the likes of the two years of generous applause and special treats I employed to make cleaning up some kind of lifetime achievement, it has also become clear that since my childhood, run-of-the-mill special occasions have undergone something of a makeover. It’s bye-bye to the notion of no decorations before December 21 and hello to Christmas-palooza-jingle-bang-Vegas-style EXPLOSION starting, at last count, October 15th. A meal with family, some “Fa-la-la-la-las,” and an exchange of gifts is no longer enough unless it is preceded by four weeks of chaos, three meet-and-greets with Santa, two work parties, and a partridge in a pear tree.

Yes, evidence of special occasion inflation is everywhere! For one, there’s a few new characters on the scene like Eddie the Elf, the real LIVE princesses who seem to grace every second birthday party we attend, and the Switch-Witch, who I can personally thank for an annual November weight gain of 5 lbs.

Then there’s the addition of completely ambiguous special occasions like the Hundredth Day of School, which by my calculation is only the 58th, but nonetheless involves me counting out 100 cheerios at the riveting pace of my five-year-old and sending them to school in a small baggie. And finally, there’s the piece de resistance, the essential centrepiece of any party set to impress/one-up your social media crowd, the quintessential abomination at the very heart of creating lasting festive memories for your child… PLASTIC. And lots of it. Plastic banners, themed plastic cups, plastic plates, loot bag items, garland, plastic witches, elves, hearts, beads and eggs, centrepieces, balloons, ornaments, confetti, even plastic versions of things formerly found in nature like leaves, pumpkins, wreaths, and pine cones. Yip, it’s not a special occasion unless you’ve spent at least 40 bucks at Party City, decked out your house in gaudy paraphernalia, and sent your guests home with some heartfelt memento that won’t decompose for millennia to come.

Of course, it is entirely my choice whether we choose to partake in these shenanigans, but let me tell you, taking a stand is tricky business. Case in point, three years running I have managed to quash Christmas spirit on the unholy day of December 1st when I tell my kids that, unlike Suzie and Sammy and Billy and Holly and Maya and Frieda and Mohammed, they will NOT be having their own personal whimsical elf gallivanting around the house. And when they ask why, I have the choice of telling them that a) they are already on the naughty list, or b) outing all the other well-meaning parents out there while showing myself to be too lazy for such thoughtful and jolly exploits.

Lose-lose, but I digress. For whatever reason, this St. Patrick’s Day is the shamrock that broke the camel’s back. There will be no candy, no pots of gold, no rainbows, and certainly no blimmin leprechaun trap. Perhaps, this special occasion will be memorable for another reason. It will be the St. Patrick’s Day that this mom finally said enough.