What My Own Father Taught Me About Being a Good Dad 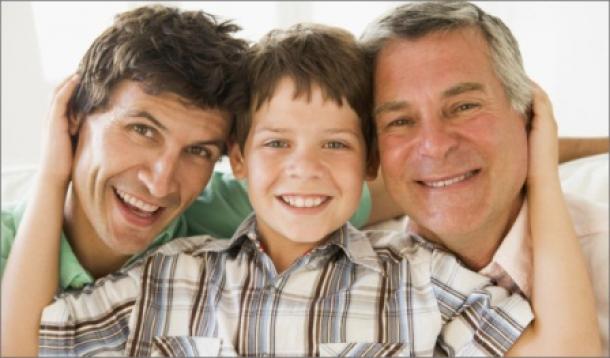 BECOMING a father isn’t much more difficult than buying a few rounds of Margaritas on ladies night, and proclaiming how important family is to you. However, BEING a father requires either a commitment, a desperate need for a place to live, or a woman with good tracking skills. Being a GOOD father is another matter, entirely.

I’d like to think I’m a good dad, and if you were to ask either of my kids (most of the time), I think they’d agree. I’m fair, I’m fun, and I do my best to take care of them. For me personally, I don’t have to look much further than my own Dad, my Big Poppa, to find the elements that make a good, no, make that exceptional father.

When I was just a little Biggie, and long before I was a Daddy, my father (through his example) showed me the way to be a good father. I don’t think it was an intentional lesson, but more of a fortunate set of circumstances for me; When he was a child, my dad was subject to some pretty strict discipline, and ridiculous punishments. My grandfather seemingly thought that a whack across the skull of a child, with the bone handle of a carving knife, was an appropriate correction of a misbehaving child at the dinner table. The lesson my Dad took from this sort of “discipline”, was that he’d never treat his kids the same way. That was a fortunate decision for me (and my brother), as we’d likely have had permanent dents in our heads, if subjected to the same standards. At the same time, please don’t think that my upbringing was without its share of FAIR discipline. There were a number of occasions that apparently required an element of corporal punishment. I can’t say that I’d ever argue the point as to whether I deserved a spanking, because my Pop always made sure to explain to me what I’d done wrong, prior to ever smacking my butt.

If legend has it correctly, there was a day where I actually asked if he couldn’t “just get it over with and spank me”. By the time I was 15 years old (and for the next decade, or so), I figured I knew it all, and had done it all. Today, I shake my head at that punk kid (me), and recognize that I often took the hard way, as opposed to listening to a man that had lived it once (or twice?) and lived to tell the tale.

It took a while, but over time, I learned a LOT from my Dad; Most of it still remains with me today. He has a knack of telling you what’s on his mind, and in a way that’s memorable. He’s told me many things that have shaped my life; Here, I’ll share just a few:

1.) “If it has tits or tires, it’s gonna be trouble.” - Before you get your fine mail order panties in a bunch, just think about the simple brilliance of this statement… Essentially, women and cars will cause problems for men. Do not argue this point, the more you protest, the deeper the truth. Over the last 10+ years he’s added the phrase “or a computer” to this little gem. Again, don’t argue. Ssshhhh!!!

2.) “There’s a difference between scratching your ass, and tearing it all to pieces.” – I’ve always thought this to be a more colourful version of “everything in moderation”. Simply put, more is not always better. I don’t think we need to argue this point either.

3.) When I call my Dad on the phone, as I often do, and ask him how he’s doing, his reply is usually “As good as it gets anymore”, or maybe “as fine as frog’s hair”, which suggests to me - about as fine as can be; He’s always been a man that can focus on the good things (which, over the years, has been of significant value to me and my bro). As he’s aged, and faced arthritis and some significant heart problems, he’s always kept it all in perspective.

4.) “You gotta know when to hold ‘em, know when to fold ‘em” – OK, truthfully, Kenny Rogers is the guy that explicitly said these words, but it’s not a lesson that’s lost on my Pop, nor on me. He says, in reference to my Mom (whom I also love dearly), that (paraphrasing) “sometimes you just gotta hush, and let her say her piece & after a while, things’ll be OK”. Translation: Not every little thing is worth having a big battle over. Thanks Dad; thanks, Kenny.

There are many more lessons to be learned, but I won’t overload you with a lifetime’s worth of knowledge, crammed into a few short moments. My message is simple; I have a great deal of respect, love, and admiration for my Dad; Having taught me that through love, patience, and understanding, a man can have a hugely positive impact on the life of a child. Today, my two little demons / darlings benefit from this insight.

So, maybe instead of buying your Dad an ugly tie for Father’s Day, just let him know that you were listening, as he shared a life full of experience and lessons learned with you.

Big Daddy is the villain of MOM Magazine and has been antagonizing readers since 2007. In real life, Big Daddy is the doting dad to Oscar and Lauryn, and the devoted hubby to Tamara, founder/ publisher of MOM Magazine (Yes, he sleeps with the publisher which is how he got the gig.) When he's not drinking beer and/or playing with the kids, he nags Tamara about her spending habits and potential drinking problem (she likes the vino a LOT). She just laughs and asks him when he is going to do some laundry, and that she'll quit drinking when he goes for his prostate exam.