How My Husband Rocked The Stay-At-Home Dad Title

My kids have a major dad 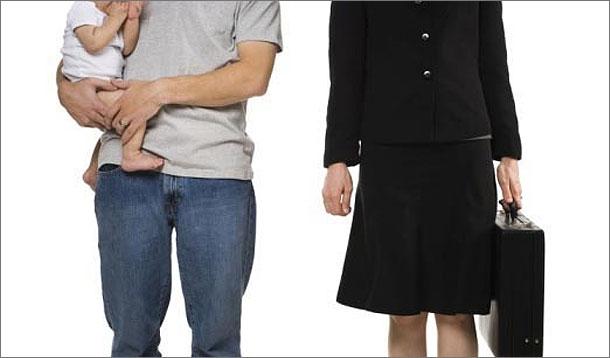 At first glance, my husband Chris is not the type of fellow you would think of as being a stay-at-home dad. He is a six foot, two hundred pound, Canadian Forces member who spends a good part of his time in the gym. He is, what you would call, a guy’s guy. When we found out in the summer of 2010 that I was expecting our first child, first we cheered, then we panicked, and then we crunched some numbers. We realized that the best plan for us was to have Chris take paternity leave, while I continued to work. As a self-employed person, it was more complicated for me to access parental benefits than it was for Chris. Through his position in the armed forces, he was allowed to take nine months to stay at home with our baby. So, when Sophie was born, the following winter we put Operation Poopy Diaper into effect.

For the first eight weeks of Sophie’s life, both Chris and I were looking after her full time. Through the haze of sleep-deprivation and fluctuating hormones, we tried to establish feeding and sleeping routines, and did our best not to turn on each other when things did not go according to plan. Very quickly, those eight weeks passed and I had to start working again. I think we were both a bit nervous about the transition. It turns out, the worry was for nothing. Chris kicked a** at full-time parenting. Sure, some of the housework was pushed to the sidelines (97.5% of it) and some of his outfit choices for the baby were questionable (seriously, you put her in that?), but all-in-all, he really hit his daddy stride.

Part of the time I worked from home, so I was able to observe the way Chris related to our daughter. It was pretty cute to hear him serenading her with Metallica on his guitar as she bounced in her jolly jumper, or to see this big macho dude making up silly dances to calm her when she was fussy. He dutifully took her on daily hour-long walks, to give me much needed quiet. It wasn’t all smooth sailing, of course. No matter how nurturing the fathers are, babies still scream for their mothers. Chris admitted to frustration and isolation at times and to feeling like he was stuck in “baby jail.” Despite the stress, I noticed that he bought lottery tickets more frequently, as the deadline to go back to work drew nearer. Could it be that he longed to be a permanent stay-at-home dad?

Chris has been back at work for over six months now and Sophie is in daycare part time. There was a part of him that was glad to go back to work, but I think he does miss spending as much time with our daughter as he used to. I know that the time they had together definitely cemented the bond between them. It was absolutely the right decision for us. We don’t know yet if we will have a second child, but if we do, we’ll probably have the same arrangement. The only question is, can he handle two of them?

Shelly Findlay is a mother of one young child but feels as though she has more. She is an actor and a fitness/dance instructor. She loves to run (not only after her toddler) and read. Lately, she finds that she hardly ever leaves the house in a shirt that is 100% clean.