There's a Lesson in the Way Toddlers Deal With Boundaries

For many kids, boundaries are a personal challenge. Some of us don’t grow out of that. And that's not a bad thing. 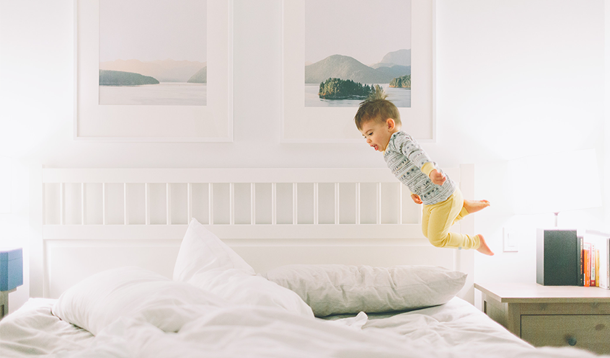 I feel fundamentally dumbfounded at the way children, especially toddlers, deal with boundaries. When I think of boundaries, I think of police tape. But apparently when my kids think about boundaries they imagine an endless gray divide, miles and miles of free ranging, negotiable space between what should be and what should not.

Give a toddler a rope and they “wanna be a cowboy.”

My kids love to jump. They love it. My son has been in gymnastics for 48 of the 68 months he’s been alive and my daughter started when she was two. They love it. It’s helped them develop a sense of physical confidence to go along with incredible strength and flexibility. It’s also driving me crazy.

Just now I had to take a break from writing this very post to go in and discuss with my children than jumping from one low bed to a higher bed two feet away and doing a forward roll at the same time may not be their best choice. But the interesting part comes after I’ve told them that they can’t do something. If I tell my kids that the can’t stand up and jump off the arm of the couch, they will absolutely jump off the arm of the couch… from their knees. My son will do a backflip on the couch because I told him that a forward roll is not allowed.

Whenever I tell my kids that they can’t do something, they figure out what that means that they CAN do. My son has kicked someone before when they were bothering someone because I had told him not to punch them. Because kicking is not the same as punching and TECHNICALLY I didn’t tell them not to kick anyone.

For many kids, boundaries are a personal challenge. Some of us don’t grow out of that. Once day we were skating on the Rideau Canal and my wife said that she didn’t think that I could push the kids and her in a sleigh the entire distance that we needed to travel. So of course, I just about killed myself pushing my entire family much farther than I should have.

Pushing boundaries is not a toddler thing. It’s a human thing. Tax lawyers pride themselves on their ability to bend the rules governing personal and corporate taxation. Athletes like hockey player Sean Avery use bizarre competitive tactics because no one has officially said that they can’t. They changed the actual rules so that Wilt Chamberlain wouldn’t dominate the game of basketball.

Not only is it not a toddler thing, it’s not a bad thing.

The world has been shaped for the better by the people who were willing to push boundaries. As my children push and push and push, I’ve begun to take pleasure in the creative ways that they test the limits of possibilities.

Now this doesn’t mean that I let my kids get away with things. Testing the boundaries does not mean breaking them. It’s still my responsibility to keep them safe, but safe doesn’t mean locked in a tower for all eternity. Often it means watching your children do something that they might get hurt doing…and cheering them on through it. And picking them up after.

Boundaries are complicated. But it took people pushing them, sometimes past the breaking point, to have the world we have.

RELATED: 5 Ways To Get Through Tough Parenting Moments