I Cry. Are You Going to Tell Me to Man Up? 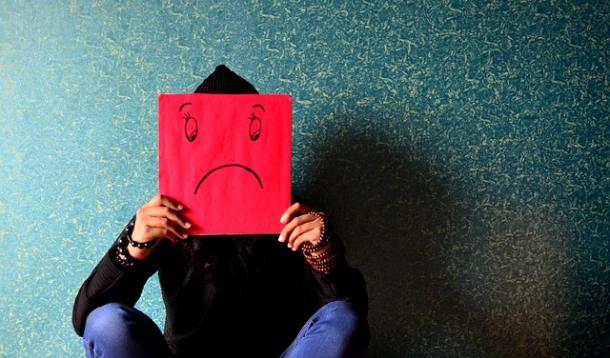 Every night my wife and I watch TV “together.” “Together” is a loose term because most nights one or both of us are working while we’re “watching.” “Watching” is a very loose term because half of the time we’re actually watching our phones or our laptops or whatever. I’m sure life is pretty similar in your house. In any case, we’re currently watching How I Met Your Mother on our third run through and almost every episode, at the 15-19 minute mark, I say the same thing; “this show is stupid.” I say this because the show makes me cry. And I’m a dude, so crying is not on the table.

There’s no crying in baseball. Or football. Or school. Or work. That’s what we’re all told, right? The truth is I’ve been a crier since I was a kid. I’d watch a TV show or a movie or even read a book and the tears would start. Even my rough and tumble lesbian step-mom would tell me that I needed to toughen up. My dad, had he been around, would have done the same. My extended family are rough-around-the-edges physical laborers. They build cars and fix toilets and lay carpet and they sure as hell don’t cry. So what’s my problem?

When I became a dad, especially of a boy, I thought seriously about how I would handle crying. Would I tell him to toughen up? No. Not a chance. It’s not tough to bury your emotions. It doesn’t make you strong. It doesn’t make you weak either. What you do with you emotions doesn’t make you a man or a woman. It makes you…you. I’m me because I can’t listen to the soundtrack to Great Expectations (the terrible Ethan Hawke film version) without crying, and I can’t listen to Hide and Seek without thinking of when Trey got shot on The OC...and crying. That doesn’t make me tough, or weak. It makes me a human who is emotionally connected to music, television and film. Don’t even get me started on the Fresh Prince episode with Will’s dad.

What happens when we bury these emotions? It’s simple. Have you ever tried to hold something in that doesn’t want to be held in? The result is an explosion. When we hold something in somewhere, it comes out somewhere else. When we hold in our emotions sot that we don’t cry or show weakness, our body and our mind figure out a new place to hold that energy. It’s a headache or a stomachache or digestion issues…or lashing out at people you love. There’s nothing “tough” about not crying. You’re not a “man” because you don’t find sad things sad and sad things happy. Maybe 100 years ago it might have made sense. Maybe. But 100 years ago you could hit your spouse and your kids and smoke in elevators.

I was the captain of my high school football team. My job was to hit people as hard as I could and hopefully make it so they didn’t want to play football for the rest of that day. But while I was hitting people as hard as I could, I was also reading and crying and watching and crying and listening and crying. Did I show all of my teammates that I cried? No. Of course not. While I’m not a fan of the word, they would have called me a “fag” and probably tried to kick my ass. You know, boys will be boys.

Except there’s nothing normal or okay with using a homophobic slur against boys because they show emotions. We brush it off. We treat it like it’s fine and thus grows another generation of boys who think boys that cry are “pussies” and they deserve a beat-down. So what’s the solution?

First, when your child is crying (especially your boy), don’t ask them to stop crying. Ask them why they’re crying. If it seems like a good reason, support them. If it doesn’t seem like a good reason, support them anyway. Just because you’re not emotional about something doesn’t meant that it’s irrational for someone else to be. A few nights ago my son cried and cried about the IDEA of growing pains. Do I think that’s stupid? YUP. Did I tell him he was stupid for crying about it? No.

If you think I’m being overly soft, I’m not. I think we need to stop giving out participation medals and making kids think that trying is just as good as succeeding. I think that there are winners and there are losers and that there’s nothing wrong with that. I think that it’s okay to cry when you’ve lost, especially when you’ve lost big, and I think it’s okay to be happy that you won. This doesn’t mean it’s okay to gloat or that a game of Candyland should end in tears, but rather that winning and losing are okay. And crying is okay. And most behaviors that don’t directly interfere with the happiness and well being of others are okay. You are okay.

Off to watch Gilmore Girls.

RELATED: Why Men Should Be More Cool With Crying