Dads: When it Comes to Not Judging Each Other, We Have Work to Do

I am not the babysitter 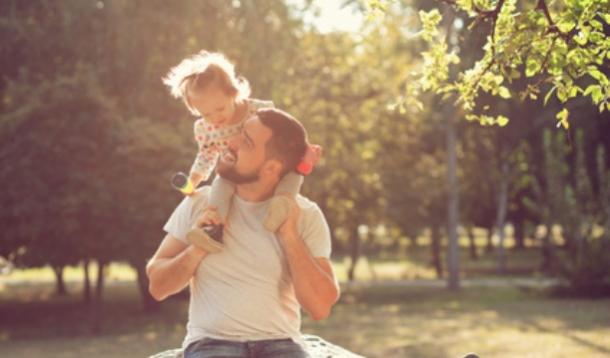 Today my wife was out meeting with a prospective client, so I was on solo parent duty. Normally I would hunker down and just stay inside counting the seconds until my wife returned to save me from the craziness that comes with having a 4 year-old and 3 month-old baby. Plus, I prefer staying home rather than interacting with the general public anyway.

But for some reason, I decided to have an outing with both kids in tow. Crazy; I know. So we headed to the bastion for weekend family outings when there's nowhere else to go - Target. I needed some new shirts for work, my 4 year-old needed to use up some energy, and my 3 month-old needed to nap, so what better place to leisurely cruise and accomplish all these things?

I see myself as a fairly progressive dude, but to me, being a hands-on dad is just the way it's "supposed to be," so caring for my kids is not something I see as abnormal, or in need of recognition or praise. Yes, from time to time I still get the occasional, "Oh, look who's babysitting while mom is gone," or some other minimizing comment. Sure, it eats at me as much now as it did when our son was born almost 5 years ago, but now I blow it off more easily, as they usually come from someone much older, and I'm certain they mean no harm by it. However; today while at Target I got a reminder that society still has a very long way to go.

While walking in the toy department of Target this morning, I held my son's hand as he dragged me from aisle to aisle trying to negotiate the purchase of a toy. I also wore my 3mo daughter on my chest in carrier. Sure, I could have left her in the car carrier and placed in a basket as we walked, but she sleeps better when carried...plus, I love wearing her, just like I loved wearing my son when he was a baby.

As we were looking at action figures, I was answering my son's question after question about different Marvel superheros, explaining to him who everyone was, all while rocking, swaying and patting my daughter to sleep. Another father (not much older than me) and his son, who looked to be about 7 or 8, passed by us. I noticed the young boy's inquisitive gaze at me wearing the baby carrier with a baby in it, and I smiled at him. As my son continued to ask endless questions I overheard the boy as his father, "Dad, why is that man wearing a baby on his chest?" I waited in anticipation to hear a fellow dad explain how men can wear babies too, but instead I heard, "Because men are becoming pussies these days. They'd rather act like women than be a man."

Needless to say, I was floored. I was in shock, not only because that's how a fellow father sees another dad caring for their child, but that that's the kind of example and lesson he would teach his child.

I could have easily said something to the the dad; putting him in his place in front of his son, but instead, I held my son's hand a little tighter and embraced the moment I was in with my children.

I am lucky to be part of a great community of parents since joining the online/blogging world. Both moms and dads who not only support parenthood as a whole, but are on the front lines of lifting up fathers. But, like so many other times when surrounded by positivity and others who think like you do, I became complacent, and maybe a little naive in thinking progress had taken us further.

Clearly, we have much work to do.

RELATED: Dads Get a Bad Rap and We're Partly to Blame

Mike Cruse is a married father of two crazy, funny, over-the-top, beautiful kids. Life-long story-teller with a love for writing. Creator and lead writer at PapaDoesPreach.com. Currently still stuck in a 9-5 job, but inching closer to his dream of being a writer when he grows up, one blog post at a time. Born and raised in San Diego, CA, but now resides in Alexeandria, VA. Connect with him on Facebook and on Twitter.