Cuddling Your Baby Changes Their DNA 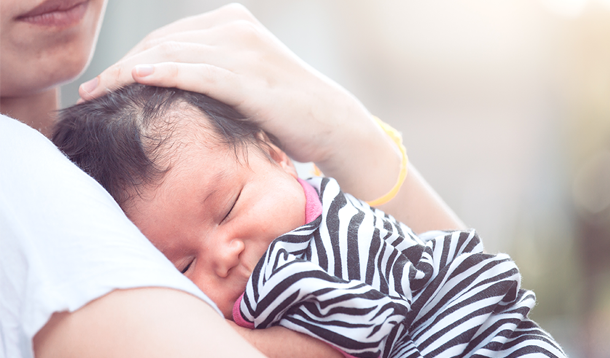 A scientific study has published a jaw-dropping report about the impact of physical touch on a child’s DNA. The study, which was published in the peer-reviewed medical journal Development and Psychopathology, found that physical touch in the post-natal period led to a measurable molecular-level change in the child.

Now that we’ve got science on our side, the next time someone tells us that we’re cuddling our babies too much, we can point them in the direction of the latest research conducted by our very own Canadian researchers, at the University of British Columbia and British Columbia’s Children’s Hospital. Not that you’ve ever needed permission to hold, comfort, and cuddle your infant, but science confirms that doing so is beneficial, right down to the shifting of their DNA.

There’s a reason why hospital birthing rooms have posters touting the benefits of skin-to-skin contact post-birth. We already have studies that confirm the benefits of post-natal skin-to-skin, both shortly after birth, and throughout the newborn stage. But now we have studies that confirm that children’s DNA is changed by more frequent and consistent cuddling during infancy, too.

Because these children are still relatively young, there’s more to be studied and researched in the years to come. The researchers plan to follow-up with the children and see whether there’s a prolonged impact, particularly on their psychological development.

Now that we have an excuse, we can keep on holding, snuggling, and savouring those sweet babies of ours. And, if you’re like me and you’re out of the baby stage, maybe this will be the push we need to step in and support parents who need someone to give them a hand. By offering to help them around the house, bringing a meal, or doing whatever it is they need so that they can get some extra rest and cuddle time with their newborn.

Reading this study has left me with one question though: what about the kids that didn’t get all those cuddles? And what if there’s a parent reading this, who for whatever reason, wasn’t able to cuddle their child? The postpartum period is stressful, the last thing we want to do is guilt parents for the past, and stress them out about something that they can’t change or do-over again.

I say, it’s never too late to offer cuddles to our kids, no matter what their age. Whether it’s laying with them as they fall asleep and gently rubbing their back, giving them a pedicure and foot rub when they’re stressed out about homework, or making a giant blanket fort in the living room and getting all snuggled up to watch a movie. Maybe there’s no science to back it up, but I think kids will always appreciate a hug, or comforting touch from their caregiver, and it’s never too late to start.