“The Beach is So Relaxing with Kids!” Said No Parent Ever

I love the beach, but it's easier with no littles in hand. 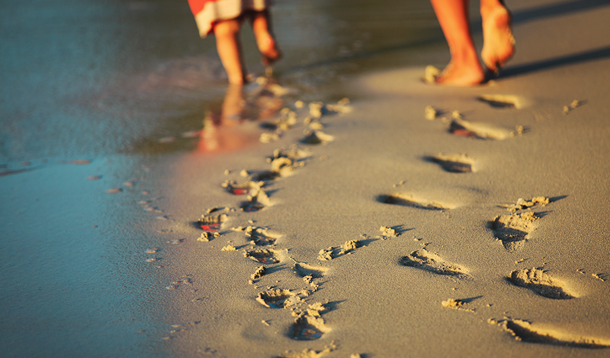 Someday the beach will be your happy place again.

Those early days as a first-time mom are ones no woman forgets. The lack of sleep, the never-ending monotony of caregiving tasks, and that overwhelming feeling of being completely responsible (and clueless) are tempered by first smiles, first words, and the out-of-this-world awe that one experiences looking at their very own piece of perfection. I remember those times being many things—glorious, trying, transformative and, as much as anything else, exhausting.

That’s why, back in 2010 when our first born was just 13 months old, my husband and I decided to book a much-needed family break to Cuba. We figured there’d be no place better to recharge than our happy place—the beach—and we couldn’t wait to dip our son’s gorgeous toes into the ocean for the first time. By and by, early in February, we packed our bags, said an excited sayonara to the bleakest days of Canadian winter, and hopped on a plane headed south.

In retrospect, perhaps the three hours of crying our son did on the plane ride was an omen, but we figured it would be long forgotten the second we settled for a relaxing time on our beach chairs and felt that white sand between our toes. We set out to do just those things immediately after breakfast the following day. The packing for this little excursion was considerable. We had our swim wear, his swim wear, a round of hats and sunglasses, our sunscreen, his sunscreen, our water bottle, his water bottle, a little cooler for his milk and snack, an $80 UV tent to protect his precious skin, some sand toys, a beach blanket and, optimistically, a blow-up dragon floaty that he would use to bob about in the waves.

To say our inaugural trip to the beach was an eye-opener is an understatement. Dipping his toes in the ocean was not quite the milestone we’d envisioned as our little cherub made a sneaky beeline for the shore immediately upon arrival and nearly drowned himself in the surprisingly powerful surf.

Not long after, we came to the realization that a sun tent only worked if the child was actually in it, which he was for approximately four seconds each of the eleven times I placed him there after rescuing him from various perils of the shoreline. The same sentiment applies to baby hats and sunglasses—they are only useful if the child in question actually agrees to wear them. The ultra-sensitive, PABA free SPF 4000 sunscreen that we applied to his skin worked well enough, I suppose, especially if you valued its adhesive properties to sand.

Our dream of sitting peacefully on our beach chairs evaporated as we realized that a one-year-old on a beach is a full-time job for two, and the notion of relishing the sand took on a whole new meaning as our son alternated between eating it and throwing it in the face of a six-month-old seated next to us. To our credit, we did snap an adorable selfie of the three of us in front of an impressive tropical background before he dumped the contents of his water bottle, used it to make a sand castle, and then declared he wanted wa-wa. Not easily discouraged, I chalked it up to beginner’s folly and regrouped over a dinner hour in which my son persisted in feeding me the remnants of his now soggy beach snack which I, ridiculously, thanked him for profusely.

Round two was not much better. We gave his dragon floaty a go which, though he found to be great fun, we found exhausting. Ultimately, we had to make the decision to pull the plug after deciding that co-piloting it against the strong surf was out of our comfort zone. This led to a melt-down of epic proportions which culminated in an ungracefully executed nap during which he refused to take off his wet swimming gear. My husband sent me to read a book by the pool to regroup, but my optimism was admittedly waning.

On day three, we noticed a pimply rash developing on our son’s torso and in a panic consulted the resort doctor who diagnosed it as a heat rash and assured us that we could return to the beach. I wish he hadn’t. As it turns out, the only thing that sand adheres to better than industrial-grade baby sunscreen is a swim diaper full of sh*t. There was nothing to do but pack up and head back to the hotel room where I painstakingly cleaned his bottom while he writhed and wailed. Later, after he fell into an exhausted stupor, my own tears started to flow.  “I just wanted a relaxing holiday in my happy place,” I moaned to my husband, “We may as well have stayed home.” We spent the remainder of the holiday by the pool.

Fast forward eight years. My family of five has set up shop for the day on the shores of a Saskatchewan beach (hey, it’s much cheaper than any all-inclusive). My kids are now nine, eight, and almost five. I am sunning myself, engrossed in my book, when I hear the adorable sound of baby laughter. I look up and smile at the scene. I see you, your back stooped over your nearly-walking toddler, smiling but weary as she pads her gorgeous pink legs across the sand. She squeals with delight, plops herself down, and discovers the delights of sand running between her fingers. Yo0u get right down next to her for a time, but this is the only time I will see you sit for the next hour. In a moment that is bittersweet, I realize that I have in fact reclaimed my happy place on the beach.

I see a UV sun tent set up along with your other things, and silently pray that she will have a nap for you in there this afternoon.

A mom who has been there