Reflux: The Hell on Earth Too Many Babies (and Parents) Know About 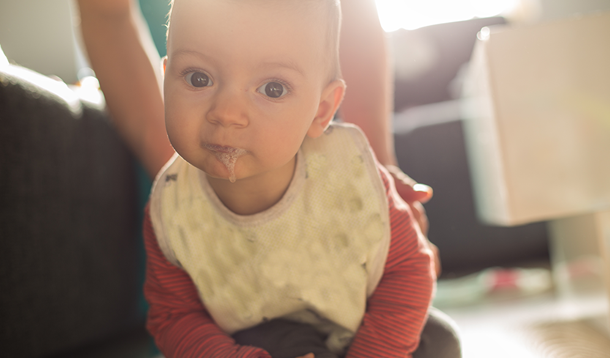 Isn’t gastric reflux so fun? Super fun! Your kid sucks a teeny bit of milk and then manages to upchuck three gallons of liquid. It’s really an amazing thing to witness.

Reflux isn’t funny. It’s not. The fact is, yes, reflux can be serious, but most of the time, it's fairly benign and just insanely annoying.

If we can’t look at the shit (or puke) we have to deal with on a day-to-day basis and at least try to find the humour of it, we might make ourselves crazier than we already feel. Being the parent to a child with gastric reflux is, after all, a special kind of bond.

So, today, let’s commiserate, shall we?

It’s not really funny, not being sure if your kid is keeping anything down. It takes a hell of a long time to realize that when they bring up what they just drank, it comes with a lot of stomach acid and saliva, so it looks like a million litres of liquid just came out of your ten pound baby. If most new moms are blown away by the amount of poop that can come out a little human, talk to any parent of a kid with reflux and get them started on bodily elimination.

Your couch will never be the same

That poor couch. You try to catch it, but though your efforts are valiant, we all know that that kid of yours will just randomly spit up with zero warning. Having a microfibre couch is pretty much the kiss of death when you have a child with reflux. Either just save yourself the trouble and throw it out now and replace it with leather, or be prepared to need to do it down the line. It will never be the same. Between the reflux and the potty training, our couch was a petri dish by the time it went off the dump. Replaced, of course, with leather.

On at least one occasion, you grossed out a room full of people

We get used to the spit up, we parents of reflux babies. We take the spit up in stride. “Oops! Baby spit up again. Wipey wipey!” But when you’re in a quiet room, with a bunch of other people, and your lovely six-month-old heaves a bucket of goo over your well groomed outfit, you hear that collective gasp. And you snicker. And then you rush out of the room and whisper ‘rookies’ to your mom who can’t stop laughing.

If your reflux baby slept, please, share with the rest of the class what you did. Because my reflux baby was up every forty-five fricken' minutes. She was a colicky mess of a thing for the first four months of her life. I recall crying to my doctor ‘I think she has reflux. She’s miserable! She won’t sleep! Isn’t there some medicine you can give her?!?’ There was, of course, medicine he could have given us. “But she is gaining.” So, no meds for us! And no sleep for us either. (Would that I could go back in time, I'd demand them).

Holy crap, do you remember the first time someone suggested ‘it will be better by eight months?’ I couldn’t take eight months of baby who spit up twelves times a day! But I did. I endured eight months of a baby spitting up twelve times a day. I burned those receiving blankets when she finally, reliably, kept down her food. It was a glorious transition to a world where we could consider leaving home without them. So, I had a bonfire. Eight months, y’all. Don’t ask me why it’s a thing. But it’s a thing.