I didn’t receive a lot of negative attention for breastfeeding in public. But I had certainly seen the negativity directed at others. 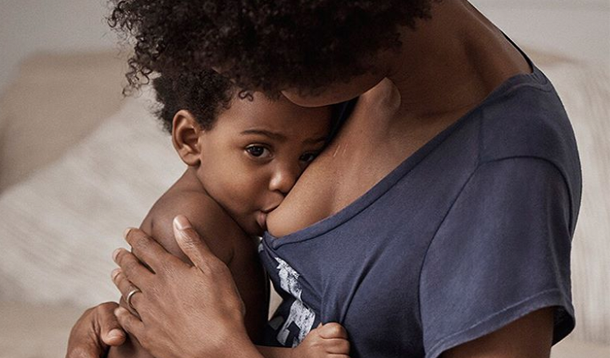 For a moment, I considered making the dash across the parking lot to the indoor part of the mall so I could find a bench, but my baby made it clear he was a ticking time bomb, and if I didn’t feed him in the next 12 seconds, I would pay for it.

So, I did what any rational human being would do - I sat on a planter and took my boob out.

Like Sandra and Keanu when they got those people off the bus before it exploded, I exhaled and patted myself on the back for averting what had seemed to be impending disaster.

As I perched precariously, half in a potted plant, an older couple, who greatly resembled Oscar and Emma from Corner Gas, approached me. “Here we go,” I thought, sure they would have some commentary on my partially exposed breast. Then I noticed the giant grins on their faces.

“I nursed my daughter,” the lady informed me. “One time, I was at a family member’s house, and my daughter wanted to nurse. I said I’d go to the bathroom, but the family member said, ‘Oh no you won’t, you’ll do it outside. We don’t do that in this house.’ It was the middle of winter!” She motioned to her husband, “He had to go warm up the car!”

The husband chuckled, “It was a long time ago, but still!”

After a bit of small talk about breastmilk, the couple went about their way, and I finally made it to the dollar store, my day having fully been made.

I didn’t receive a lot of negative attention for breastfeeding in public. Most people ignored me, or at least pretended to, and went on their way. But I had certainly seen the negativity directed at others enough to make me feel self-conscious, so that interaction was very affirming.

In addition to breastfeeding in public, I also went taboo and nursed my kids into toddlerhood. If you think nursing a baby in public draws attention, try nursing a child who can speak. I’ve heard every silly excuse against breastfeeding toddlers – if they can ask for it, they are too old. You should stop once they get teeth. It’s gross. It’s sexual. You’re doing it more for you than for them. (Anyone who has ever been kneed in the face by an acrobatic nursing toddler knows well and truly that the last one is especially ridiculous.)

It is, of course, perfectly normal to nurse a baby past age one, but people still have feelings about it, and they are eager to share them. Normalizing extended breastfeeding is a great way to combat the discomfort it often conjures.

When model Adaora Akubilo Cobb and her 20-month-old son Arinze took a break from their Gap photoshoot to nurse, photographer Cass Bird saw a beautiful opportunity and asked to capture it on film. A photo of the tot nursing became part of the ad campaign.

This @gap ad with a black mama breastfeeding is giving me LIFE #RepresentationMatters pic.twitter.com/YZqCwA2ui1

Predictably, it was met with some backlash, both for extended breastfeeding and showing breastfeeding at all, but Cobb felt it was an important message to send. “Our society in particular is not very supportive of women who nurse [their children] after a certain age,” she told the Chicago Tribune.

She also remarked on how she was lucky to work in an industry that allowed her to breastfeed as long as possible and lamented that many women are forced to wean earlier than they wish to due to their return to work.

Showcasing Cobb nursing her son in the ad was a step in normalizing several wonderful things – extended breastfeeding; nursing in public; breastfeeding in the workplace; and black women breastfeeding, which is often stigmatized.

Cobb expressed her thanks for the opportunity to Bird on Instagram’. As she told Chicago Tribune, “I don’t want women to feel shamed. It’s so important to encourage mothers.”

Indeed, regardless of how mothers choose to feed their young children, this should be the case. No one should be shamed for feeding their child any way, any age, or anywhere. There need not be campaigns to accomplish this. We simply need to see women feeding children, whether by bottle or by breast, and see it as beautiful – or at least not make a big stink about it.

Thank you, Gap and Adaora, for sharing with us that beautiful picture. And thank you, lovely couple outside of Winners, for showing us how far we’ve come.