I wish I read a list like this so maybe I could be a bit more mentally prepared for what was to come. 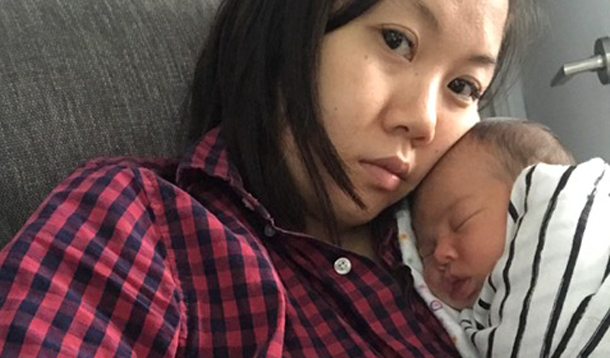 When I just had the baby, I was still living in shock and denial that a human came out of my body (I’m STILL in disbelief but obviously had to accept it REAL fast).

Newborns are not for the faint of heart. It’s also a total physical and emotional roller coaster that has high highs and very severe lows.

Two weeks into having my life completely change, I decided to draft a list of high level thoughts and feelings on what it’s like on the other side with a newborn. This list is not going to sugar coat things, my friend, and it’s something that I wish I had read prior to Kensington being born, so that maybe I could be a bit more mentally prepared for what was to come!

Or at least tricked by all the people casually walking around who have kids like it’s no big deal. IT’S A BIG FUCKING DEAL. I didn’t realize the pain and suffering you had to endure. Prop – serious props.

Newborns are MONSTERS. They’re emotional and physical terrorists – they build you up and then tear you right back down. How do they do this? Mostly sleep deprivation. But also there’s so many things you have to worry and think about, that it’s also a mental assault on your brain too. I recently read a quote that NAVY seals are similar to new moms, because they are trained to tolerate torture by prolonged sleep deprivation and having to listen to hours of infant screams, similar to new moms! ENOUGH SAID.

2. Myth: you will fall instantly in love with your baby.

I mean yes, I believe this is real for some people – but for me it was not. I mean, I felt the obligatory kind of love, because hello, Kensington came out of my body so I love her like I love my arms and legs. But I was not IN love with her (yet).

But here’s the thing: I don’t feel guilty about that. I think some people are afraid to admit they’re not in love with their baby initially, but I’m not afraid to say it. Because you know what I think is weird? Falling in love with something instantly without having forged any sort of connection to it. THAT to me seems more foreign and strange.

I was confident I would grow to love Kensi to smithereens. When we got Frankly as a puppy, I was so overwhelmed with all the work that was required to take care of her that I felt really detached and burdened by her. It wasn’t until we figured out and normalized into a routine and she became house trained that our lives became easier, and subsequently, my adoration grew.

3. There will be several moments (and for me it was like dozens of times in an hour) that you question wtf you have done.

In my case, on day 2, I decided I didn’t want her or this life anymore and told Dan we should put her up for adoption and that for a newborn she was pretty cute so I was confident that someone would pick her right away. But then a day later I conceded we could still keep her. Not going to lie, I danced around and thought about it several times a day.

It’s kind of funny that as one life is born into the world, another life as you know it is essentially put to rest. For me, my old life died – and I was adjusting to a new life. I miss what my old life use to be. My independence, my frivolous spending habits, the ability to just do whatever I wanted whenever I wanted, working + making money, the list goes on and on. I spent almost ALL day one day crying because I missed my old life so badly, that I felt like it finally sunk in that the life I once knew has pretty much died.

Or in my case – I miss when it was just the three of us – Dan, Frankly and I. We were the three amigos and now I feel a tremendous amount of guilt for not having more quality time to spend with either of them.

As you can see – the above list is kind of depressing (even though it’s the TRUTH). That’s why I’m glad that I didn’t originally post my list on Day 3 when I originally drafted it because since then, I’ve had more time to normalize (and my hormones are also calming down somewhat).  For every bullet on the list above, I’ve also drafted a new list of realizations I’ve had since Kensington was born:

Physically, mentally, emotionally – even when I’m a sobbing mess and crying for hours (or days!), I’m still strong. I carried and grew a human inside of me for 10 months. And then I unknowingly endured contractions for DAYS. I was in active labour for 10 hours (take THAT Navy Seals!) and veins were bulging out of my neck and head while I was pushing Kensington out of me. I’m actually UNSTOPPABLE.

Not that I ever doubted this myself but for anyone who might be on the fence – here’s the truth: Women are stronger than men. We just are.

This is something I have to keep reminding myself because I was just confronted with so many things I felt fearful of. Afraid to figure out how to put her in the car seat by myself. How to use the stroller by myself. How to use the breast pump. Everything that felt new and foreign that I’ve never done with her felt really scary, intimidating and daunting. And then I had to remind myself I somehow made it through labour, and survived the first 2 weeks – so somehow I probably have the reserves to figure it out.

I might not have been head over heels in love with Kensington two weeks in, but I know I loved Dan more than ever.  Dan was amazing to me during labour and has been even more amazing to me since. I was bedridden for a few days after the delivery and Dan did EVERYTHING he possibly could to make me feel comfortable. He’s been there waking up with me in the middle of the night, changes the majority of diapers, always makes sure a glass of water is filled next to me to keep me hydrated,  and doesn’t complain when he has to go up and down the stairs a million times if I ask him to get things for me. The list goes on and on.  The days after Kensington was born, we would be in bed and even though I felt really overwhelmed and crippled with fear and anxiety on how to keep this human being alive, I knew that no matter what I had a partner who felt the exact same way I did and thought I was doing great.

3. Kensington changed every day, and subsequently so did I (or at least I had to).

This is VERY scary and liberating all at the same time. I’m the same but I’m completely different. Things I cared about I instantly don’t seem to care about anymore. Case in point: Aritzia sent me their snooze you lose sale email and I went through it and didn’t buy ANYTHING. I don’t even have the compulsion to shop (for clothes) anymore, because now I evaluate everything as "is it worth it if it gets puked, peed or shat on?" and if it’s not – then bye Felicia!

Newborns are the greatest exercise to challenge anyone who has issues with letting go. I slowly day-by-day learned to let go and shed my anxieties and insecurities. For anyone who is Type A or a control freak – you’ll know how tough and challenging the idea of letting go of any sort of control is, but Kensington forced me to do it, and I’ll be better for it, and so will she.

I also let go of what I thought my life was, and did my best to welcome what my new life is like. Right then I thought my new life was awful. Simply awful. Kensington may have been receiving her livelihood via an umbilical cord when she was inside me, but being outside is different because there’s an invisible umbilical cord. I was her source of nutrients, essentially tethered to her. She had to be fed, diaper changed and go to sleep every 2-4 hours… day in and day out. This is the formula to driving someone insane, and this is ultimately what made me feel depressed and spontaneously combust into tears anytime someone asked “how are you doing?” I just had to keep reminding myself: THIS IS NORMAL and THIS TOO SHALL PASS.

That’s why when I’m scrolling through social media and seeing all these mommy blogs, with moms and their strollers out for coffee or tons of social media of people posting these perfect pictures of themselves with their newborn in these cutesy outfits I’m like WTF. That is not real life. Do not try to Instagram filter what being a first-time mom is. Show me the pictures of you in your pjs for 3 days straight, covered in vom, sleep deprived, and bawling your eyes out. Those are the REAL pics I want to see, none of this insta-filtered bull shizzle.

5.  I’m grateful for the small private moments I might have with Dan and Frankly because I appreciate them way more now.

And I’m also grateful for the sweet moments that I see Kensington have with everyone around me. Dan and Kensi. My parents and Kensi. Dan’s parents and Kensi. Mostly though Kensi and Frankly – the combination of those two are going to be DEADLY (Franks wasn’t too interested in her, but she always checked up on her when she cried and gave her some really good sniffs once in awhile, and that warmed my heart).

RELATED: ​I'm On Maternity Leave and Green With Jealousy