Hey Moms, That Formula Fed Baby is Going to be Fine 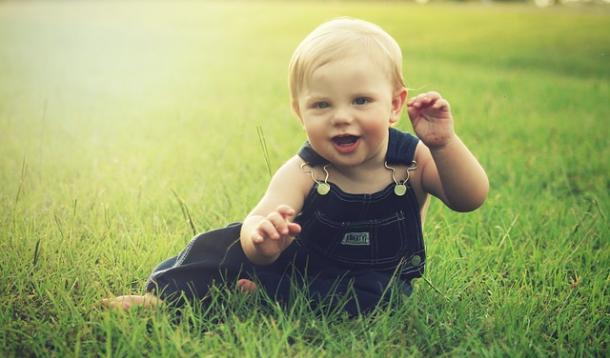 Like pretty much everyone who's had a baby in the last 15 years, I, too, was told "breast is best." And you know what, there's evidence that there are benefits to it. But for me, breastfeeding wasn't in the cards.

I had been brainwashed as a new mom into this concept that I needed to drive myself to loony land to do the best, the best, the best. I even did shit like buy organic cotton sheets and listened to classical music. I bought into that whole word "natural." Natural is also convenient in many ways, which is another plus.

My son, though, was born with a problem. Every day of his life, he slowly fell off the growth chart. The doctors said nothing — nothing — until his six month appointment when he was exactly the same size and weight as he was when he was four months old. I was a puddly mess because I was handed a diagnosis of "failure to thrive" and sent to see an allergist.

My son was starving to death on my breast. He was born with a milk allergy, and he was getting milk protein from me, via breast milk.

Now, I'm not telling this story for pity, or even as an excuse as to why I gave my son formula. I didn't need his allergy as an excuse to give formula, and neither do you.

I'm telling you this story because I had an order to go dairy-free in my diet, pump as much as I could, and suppliment the rest with soy-based formula. I was still exhausted and frustrated with the fact that I was spending hours pumping for a couple measly ounces per feed. I remember distinctly that nobody told me I didn't need to run myself ragged trying to feed my own child (this would later piss me off a lot). I brought it up and asked the doctor if it would be OK if just fed him formula alone. And my son's allergist looked at me and asked, "Would you feel like less of a mother?"

I'm pretty sure the expression on my face answered for me. But let the record also state that a medical professional told me formula-only was fine - the only real difference to him was how I felt about the circumstances. And, unfortunately, I think that tells you a lot about the policy of saying breast is best - it doesn't bother promoting to us that there's other medically acceptable feeding options nor dozens of things worse you can do in parenting your kids than give them formula instead of breastmilk (like, I dunno, letting moms spin cycle themselves into exhaustion, feelings of inadequacy, and depression). Studies have shown that formula-fed babies aren't left at disadvantage when they're compared to breastfed siblings. We should know; lots of us were formula fed as kids.

My son gained weight, I eventually went to straight formula, and the rest is history (this was all eight years ago, and my son is doing just fine).

So formula is more expensive, and you can't pass on antibodies to make dealing with viruses easier, and you won't burn as many calories. Who gives a shit?

Being a vegan and a jogger might also be "best" for my health, but you don't see me out there pounding the pavement and giving up my bacon. Winning the lotto and becoming a modern caveman, and gathering and hunting my own food with a spear might be best too. There's a lot of things that we won't, or even can't, capitalize on that are "best" for our lives. There's a ton of stuff that is "best" that we know is unachievable; some is completely subjective bullshit. There's lots of stuff that might be best, but it's only by a slim margin and it isn't worth the effort. And we don't give ANY of those a second thought.

Some babies need formula to live, and I would tell anybody who would dare criticize a mom in this situation where they can go (Hell). Yup, go die in a fire, buddy. No mom guilt for choosing between feeding and starving.

Formula though, gasp, gives women the opportunity to choose not to breastfeed. Again: who gives a shit? Some people don't want to be human cows, others don't want the inconvenience (whoever says breastfeeding is not inconvenient ever is a damn liar). Another woman's breasts and what she decides to do with them are none of our business. Just like her uterus and her sexual activities. NOYB.

Motherhood is not defined by what body fluids ooze from you.

We shouldn't get so hung up on the word "best" that we lose sight of the big picture - that the kid grows up healthy and happy in a good home environment. If the label "best" on something is negatively impacting your health and peace of mind? I would go out on a limb and say perhaps it's not really the best for you after all.

If you enjoy breastfeeding, being a SAHM, and/or being all natural, cool. Rock on, mom. And if you don't? Rock on, mom. If you're feeling mom guilt over the inability to do things when your baby is healthy, happy, and fed, repeat after me:"WHO. GIVES. A. SHIT."

These four words are intensely liberating. And it also helps people decide whether or not they ought to be a nosy busybody over things that don't really matter.

Nursing or bottle-feeding. Who gives a shit?

I give my kid chicken nuggets sometimes instead of handmade organic naturally-dyed bento meals shaped like anime characters! Who gives a shit?

I didn't want to be a stay at home mom. Who gives a shit? (Hell, for that matter, I'm pretty sure this was actually the "best" for my son anyway, because my daycare provider was FRIGGING AMAZING.)

I used the TV to babysit when I needed a half hour of me time, even though I know I said I would never do it. Who gives a shit?

And if you think less of me because of any of these admissions? Who gives a shit? Certainly, not me.

RELATED: Guilt Stopped Me from Investing in the Smartest Thing I've Ever Done