How Sleep Becomes a Very Real Monster Once You're a Parent

I didn’t really understand sleep deprivation until I had kids. 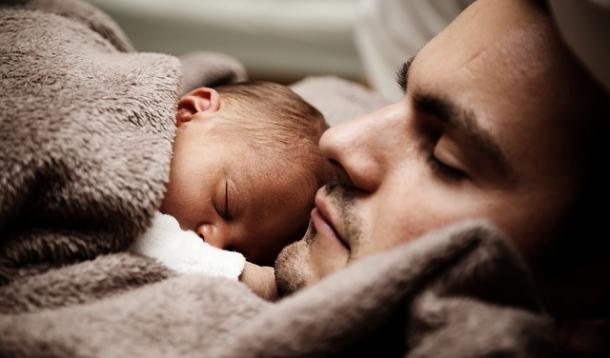 My wife and I hired a doula for our first child. It was a VERY good decision as she was able to walk us through so much of what was going to happen next.

One of the most important things that she taught us was to make a plan… and then understand that our unborn child likely cared about as much for that plan as I care about sauerkraut. As a result, we ended up with two very complicated births that ended with cesarean sections. Now, there’s a lot I didn’t know about cesarean sections (some of those questions were resolved when I made the mistake of peeking up over the curtain because “I just want to see what they’re doing”) and one of those things I didn’t know was that it would leave my wife unable to lift anything greater than 5lbs… which included our baby.

Sleep became an interesting monster during the first few months. First off, my son didn’t actually sleep. Once, I finally got him to sleep after hours of screaming and then laid down myself. When I awoke from my nap to him crying I discovered that I’d been asleep for a maximum of 12 minutes. In addition, my son liked to breastfeed for extended periods of time, often 45-60 minutes and my main job during this period of time was delivering my tiny baby boy to my wife so that he should feed. Here’s how it worked.

I would wake upon hearing my child “gently calling for me” like a banshee who found out her boyfriend was sleeping with a leprechaun. I would wake up my wife who despite being a “light sleeper” SOMEHOW has the ability to sleep through anything that she actually wants. My wife would make her way to the feeding chair and I would procure Billy Idol from his crib or bassinet (I honestly don’t even remember a bunch of those first few months) and take him to the feeding chair and give him to my wife. And then…I was free…for an indeterminate amount of time. But we had a problem.

My wife would feed my son to sleep and then she would need to put him down…but she couldn’t because he was over 5lbs. But if she yelled loud enough to wake her big dumb stupid husband she would also wake up her adorable lovely dumb baby. So what’s a girl to do? Well, help was just a phone call away. My wife would pick up the cell phone beside her and call our home phone, which I would keep close enough to my head that it would for sure wake me up.

Late one night… or early one morning… or in the middle of the afternoon one day, I awoke because I heard my son crying. And for some reason he was lying beside me in bed. I assumed that I must have fallen asleep while holding him and quickly scooped him up and began rubbing his back in an attempt to soothe him and get him to stop crying. I became very concerned because my son felt cold and a little hard and I thought, “oh great…he’s dead. I didn’t even make it to 6 months and I’ve killed out child.” I continued to rub his back as I brought him out to the living room where my son was sleeping in my wife’s arms in the feeding chair. I looked down at my “son” to find that the crying baby I had been so concerned that I had killed was in fact a ringing cordless phone.

I didn’t really understand sleep deprivation until I had kids. And this is coming from someone who, while in university taking a full course load, worked three jobs and coached high school sports. I was used to surviving on anywhere from 3-7 hours of sleep a night. So why was this such a big deal? Well, one of the biggest issues when it comes to sleep deprivation is that your body never reaches a state of deep sleep. Your child’s whimsical murmurs and whispers and cries are actually killing you. When you don’t reach and maintain deep sleep, your body doesn’t produce certain minerals that it requires for you to function. I regularly take a zinc/magnesium supplement because my body doesn’t make enough of it anymore because it’s hard to achieve deep sleep when you’re sure that at any minute your child is going to come running out of their room with a ridiculous request.

Not getting enough sleep is not ok. Not just from a medical standpoint (although you actually can be considered unable to operate a motor vehicle due to exhaustion) but also from a mental health standpoint. It’s hard. I get it. You want to be a person. You’ve spent your entire day telling your kids that you understand that they’re hungry but food doesn’t magically appear and that while some people are not physically assigned the gender that they feel they are, that’s probably not what’s happening to their two year old sister because one time she happened to say she were a boy. You want to stay up late and maybe have a beer and maybe go out with some friends. You don’t want to go to bed at 9pm just because you’re so tired you think you might die. But sometimes (not all the time, but sometimes), you need to.

It took a long time for me to understand and realize that I’m a better person when I get more sleep. There’s less chance of me yelling at my children for things they probably don’t deserve. There’s a better chance that I’ll want to spend the day doing things with them that are fun rather than telling them to let daddy lay on the couch and check his Twitter because “I’m doing important work.” I’m a better person when I get more sleep. You know how when your kids don’t sleep they are kind of huge jerks and you spend a lot of time just telling them that they’re kind of huge jerks and they need to sleep more so that they’re not huge jerks anymore.

RELATED: Stop Wearing Sleep Deprivation as a Badge of Honour