Newborn Sleep Tips: Forget the Haters; for Some, Co-Sleeping is the Solve

for some moms, co-sleeping is the answer. 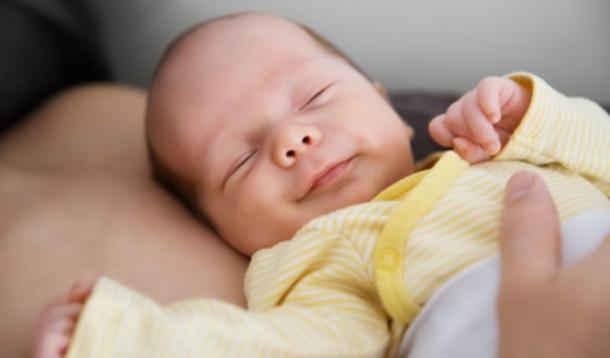 Before you have a little bundle of joy of your own, it's really difficult to see and understand — without passing judgment — the choices that parents make. I will never forget the first time I saw the now-infamous Time cover from the summer of 2012, the one that featured a young, attractive mother with her three year-old son fastened deliberately to her breast. "Are You Mom Enough?" the cover asked me in bold red print. I sure as heck wasn't, not if it meant nursing a child who was old enough to unbutton my shirt by himself.

At the time, I was in college and didn't have the capacity to understand that being a mother is hard — really hard — and that parenting is not a one-size-fits-all deal. What works for you might not work for another mummy. And while I might think that some mothers' methods are downright weird, it's never, ever my place to judge how a parent does their thing.

And speaking of judgment, one of the more hotly debated topics for parents of newborns is the dreaded newborn sleep conversation. As we all know, newborn babies sleep terribly. In turn, mummies and daddies of newborns seldom get a lot of sleep themselves, no matter how many late nights they spend researching newborn sleep tips. And lack of sleep is more than just uncomfortable -- it's downright dangerous.

Every heard of new mum sleep deprivation? Well, it's a thing. It's such a thing, in fact, that WebMD has its very own sleep disorder page dedicated to the condition. Forget about newborn sleep patterns for a minute and consider your own sleep hygiene. From drowsy driving to depression, there are a number of negative side effects associated with sleep deprivation.

That, in and of itself, is enough for some mothers to try any and all newborn sleep tips in order to get some shuteye.

Cue co-sleeping. The concept behind co-sleeping is simple enough. Sleep with your newborn. Sleep when your newborn sleeps and adjust to newborn sleep patterns. That way, the both of you are getting some much-needed shuteye while making sure that your baby gets fed when they need to.

And like my naive, college-aged self upon seeing that Time cover, many parents find co-sleeping unappealing.

In 2013, the Daily Mail released an article with the all-too-frightening title, "The new parenting fad experts fear could KILL your baby: Mothers are jeopardising their child's safety by co-sleeping." In the article, Antonia Hoyle writes of several parenting nightmares when co-sleeping went horribly wrong. Take Suzanne Morris, for example, who awoke to find her son George under the duvet at the bottom of their bed.

While George was perfectly fine, Suzanne feared he would become a statistic — namely, a child who suffered from every parent's worst nightmare: Sudden Infant Death Syndrome, or SIDS.

Historically speaking, however, parents have been co-sleeping along with their newborns for centuries. In fact, until the advent of the cot in the 19th Century, parents and children routinely slept in the same bed.

For parents struggling with newborn sleeping patterns, co-sleeping might be the only way to get the rest they truly need.

Like me, Mary Sauer wasn't always an all-knowing mother. Before motherhood, in fact, she was, the self-proclaimed, "childless friend judging other women for the choices they made for their children and their families."

Before she had kids, Sauer swore she would never co-sleep. She heard the statistics, she read the parenting-scare articles. She had visions of darling little cribs in which her babies would snooze contentedly, safe and separate.

Yet once she was a mother, she was tired. So tired. Soooo very, very tired. She writes:

“Within a few weeks of giving birth, I was dangerously tired. I was falling asleep in the rocking chair or on the couch while breastfeeding my daughter. And soon enough, I became really nervous about hurting my child. I was worried she'd roll out of my lap when I accidentally fell asleep in the rocking chair or I might smother her while propped up on pillows on the couch.”

Soon after, she resolved to give co-sleeping a try. While co-sleeping had always been presented as the most dangerous of all newborn sleep advice, it began to seem like the safest option for Sauer and her newborn.

So she did her research. Contrary to what she'd been led to believe by the fear-tactic articles like the 2013 Daily Mail piece, Sauer discovered that babies who co-sleep are actually at a lower risk for SIDS. And after finding and implementing safe co-sleeping practices, she took it out for a spin.

As she hoped, Sauer was sleeping better. And she felt like a better parent, too. She writes:

"I had a clearer head and felt I was more capable of safely parenting my newborn baby. Of course, I was still exhausted, but I was no longer so tired that I felt I was dangerous with my child in the middle of the night."

Co-sleeping worked for Mary Sauer. And you know, it might not work for you. But like most things in life, parenting is really such a crap shoot. The truth is, no one really knows what's best for your child but you. All of the newborn sleep tips in the world might be lauded as the best or worst, but you know what will be safest for your kid, and best for all of you.

RELATED: Kid Not Sleeping? This May Be The Reason