We now interupt life as we know it for hockey season. 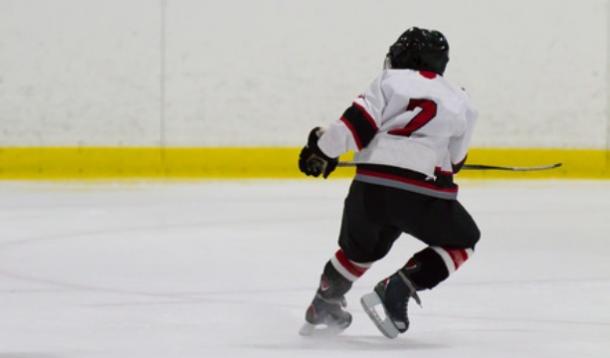 We now interrupt life as we know it for hockey season.  Yup, I'm officially a hockey widow - youth hockey is in full swing and the NHL just began it's regular schedule.  See ya in the spring, hubby!

I'm only just (slightly) joking - I'm learning to enjoy how much hockey overtakes our family life, and felt compelled to comment on why I'm embracing "Hockey Momhood" after a conversation I overheard at the park among parents contemplating registering their kids for the upcoming hockey season. In particular, three common arguments opposed to it came up: 1) “Hockey parents need to get over themselves, their kids aren’t going to the NHL”; 2) “Hockey is a huge family commitment and sacrifice”; and 3) It’s so much money.  Better to put all that money toward tutors and education. As a Hockey-Mom-in-training (I’ve only been doing the rink hustle four years now, one year being at the competitive/Rep level), I’ll admit, those things rambled in my mind once upon a time and the commitment and cost involved seemed overly excessive, obnoxious even.  There was no need to convince my husband to enroll the boys in the game. Both our sons began the sport at four years-old, and their hockey-crazed Dad has been coaching every year since. There is no denying how big a commitment the sport demands, but I’m starting to grumble less and see why so many families and youth devote so much time and resources to the game. You could say I’m embracing and now even enjoying the dynamic of a hockey family lifestyle. I’m realizing there are lessons and benefits to playing the game that linger well beyond the last time our kids they hang up their skates for good. I could be eating a big piece of humble pie one day, throw my hands up and say this is all too much, but for now, it’s game on, and here’s why:

Of course, many of these will apply to #LacrosseMom #FootballMom #SoccerMom, #BaseballMom etc. as well.

Anything worth doing isn’t always easy

Sleep and social freedom are two of the biggest sacrifices families will make. Early morning practices are no doubt a struggle for both parents and kids to get up for.  But it provides a dose of reality for our kids that if you want to commit to something and have a passion for something, you have to show up for it, irrespective of the circumstances.  It’s a level of discipline that will serve them well for years to come. Bonus: the drives to and from the rink will become some of your best family memories - so reminisces my husband having played over 10 years of youth hockey.

As far as social invites from September – March, your acceptance will always depend on the hockey schedule, and probably thoroughly annoy anyone who hasn’t experienced this yet (guilty!). Vacations will come second to tournaments, and the lack of freedom may get to you at times (Again, guilty!). Except it also makes you savour those few hockey-free weekends during the season and not take that time for granted as we would if we didn’t have consistent programming during the winter months. I also wonder if we would be making the most of our winter if we didn’t have the hockey program – filling all that down time on weekends and feeling pressured to keep them busy to save our sanity when the weather is dreadful is probably more of a nuisance than sticking to a busy rink-life anyhow.

Doing the rink hustle forges a life-long bond among the parents.  Some will become your new closest friends you love to hang out with in the off-season.  Smaller siblings become the little rink rat gang.  I’ve never felt more comfortable letting my smaller babes venture off then in the rink.  All the parents look out for each other’s own.  In the arena and during hotel stays for tournaments is where I found our “village” that is so hard to find elsewhere in parenthood these days.

The brotherhood/sisterhood among teammates that lingers well after they finish youth hockey. The bonds my spouse made over 20 years ago with his teammates really never faded - many of them reacquainting and having full circle moments as the next generation of Hockey Dads, Coaches and Officiants. Many reacquaint in adult league.

I can recall numerous occasions that my spouse earned instantaneous respect in the business world by mere mention of his involvement in competitive hockey. It’s an invisible badge of honor that carries with you through pursuits in higher learning and business endeavours. A steadfast recognition that the amount of commitment and devotion involved in competitive sport has instilled skills well-suited for the work-world. There is a network that never dwindles, and a recognition that will serve our children well in professional undertakings.

Education outside of academics

Academic achievements alone will not open doors as widely to future opportunities as they will to well-rounded individuals who commit to extra-curricular, philanthropic and community/volunteer involvement – all of which are encouraged and undertaken in most competitive level leagues. And if you don’t believe me, just have a glance at applications from higher learning institutions that request experience in volunteering, travel, sports, groups, and beyond.  I know when I applied to business school, there was quite a heavy emphasis on involvement and achievements beyond academics – perhaps even more so than GPA.

To the parent who indicated it’s better to invest the money in tutors. I will never deny the benefit of tutors to instill skills that will help students thrive in academics. However, “education” happens outside the classroom as well. In hockey, my kids are learning valuable lessons in discipline, leadership, resiliency, respect for peers and opponents, what it means to be coachable, strategies for self-improvement, healthy lifestyle choices, how to handle constructive criticism, community involvement, facing and overcoming defeat, and that being victorious requires hard work. All lessons that build good citizens, shape character and equip them to become future leaders and individuals with grit.

Hockey is costly; I won’t even sugar coat that one. But I don’t see hockey as an expense – that implies it’s a liability. I view my kids’ participation and commitment as an investment, as the payoffs in character development are lifelong and plenty.

Also, if you’re lucky (as we have been so far), you may get great sponsors and achieve great returns through fundraising efforts that will offset the cost to play considerably. Many who bash the sport fail to recognize there are other funding funnels to support kids’ participation than straight out of Mom and Dad’s bank account.

Irrespective of the points above, the affordability factor remains a huge deterrent for many families. Brands and organizations recognize this and are slowly facilitating greater access to the game. All kids, regardless of socio-economic status, should be able to participate. Here are two programs striving to make the game more accessible to all:

Jumpstart -  backed by Canadian Tire, funding is provided to families that need a financial hand with registration, equipment and/or transportation costs.

Finally, as far as the whole “your kid isn’t going to the NHL” argument, I say this: Are there hockey-crazed parents pouring on the pressure to perform at elite levels and chasing some far-reaching dream of an NHL draft for their child?  You bet’cha. We’ll call them “Arena Agents”. But, for many of us, we’re simply supporting a good ole’ love of our Nation’s game. Yes, only 1% of kids will go on to make it to the NHL (or so the statistic goes), but what message does it teach our kids when we use that as a basis to not expose them to the sport? That because 99% of you won’t make it pro, you should avoid participating? If you look at it that way, just avoid all extra-curricular involvement whatsoever, as, arguably, the entire landscape of youth sports and activities has changed considerably with a greater emphasis on competitiveness and performance versus a fun and recreational focus. Hockey has received the “bad guy” status of the bunch, but truly, as parents, we are the commanders of the ship and can place boundaries on where and how much they participate, and identify when the pressure to perform is superseding the enjoyment.

The Hockey family lifestyle, like anything, is something you’ll “get” once you do it. Admittedly, I found the scheduling and early mornings overwhelming when it all began for us. Many at time I cursed the sound of the early alarm and prodded my spouse about why we were doing this with all the other demands of life. However, after the family bonding of our first “away tournament”, I snapped out of my negative mindset toward it, and began to embrace everything it offers. I’ve come to see it’s not taking away from us, but rather bringing us closer together as a family and with our community as a whole. And, of course, it's pretty darn exhilarating watching your kid score from behind the glass and celebrating with your new Hockey Mom friends! RELATED: Hockey Parents: Read This Before the New Season Starts